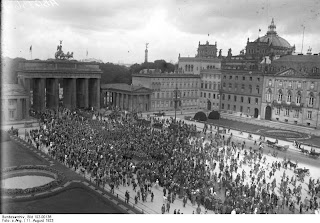 When did I last read a novelist who left me breathless across an epic span to know what was going to happen next, as I've just found with Hans Fallada's Alone in Berlin (Every Man Dies Alone) and now his Wolf Among Wolves? Probably when I was in my late teens, and devoured Dostoyevsky with such obsessiveness that my main studies at university were in danger of falling by the wayside (praise be to Russian Studies 1 and above all to Yelena Voznesenskaya, the only tutor who inspired me during those four years). I don't suppose the parallel had really occurred to me when I read Alone in Berlin, so singular and unrepeatable are the circumstances of its creation and the abysmal time it describes. Whereas Wolf Among Wolves brings us closer to the often fruitful vortices of restless 19th century Russia. The hero, Wolfgang Pagel, is a loveable but spineless young man who discovers his backbone once he leaves a chaotic inflation-ridden Berlin for a country estate which turns out to be no less full of different pitfalls. 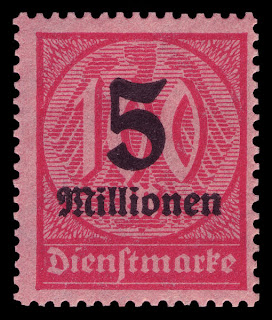 The roulette scenes in the city inevitably recalled the feverishness of Dostoyevsky's The Gambler (they're central to a first part which takes 370 densely-packed pages to describe an eventful 24 hours in Berlin). But I'd guess that the unease which spreads across the next couple of hundred pages out at Neulohe, leading up to the failed putsch - pictured below in archive footage of 1923's secret army - is a far more personal homage to the threat of something terrible in the ridiculous provincial society milieu of The Possessed. 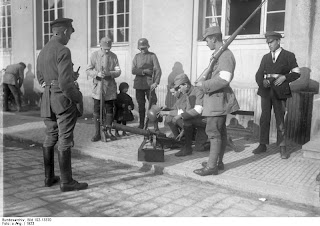 How can both Fallada and Dostoyevsky manage to be so gripping at times when, on the surface at least, not much is happening? The answer probably lies in the speed with which they wrote their tumbling prose, though Dostoyevsky's is often far less clear and makes him extremely difficult to read in Russian. Fallada knew he was risking his neck in the Berlin of 1936-7 for a novel which it was extremely risky to publish, pouring forth 123 pages a week. There is, of course, a magnificent tension both between the moral stature Pagel acquires by experience and the up-down trajectory of Fallada's fascinatingly tragic existence (I must read his biography), and in the contrast of the contented optimism at the novel's end with what we know would have been just around the corner for Pagel, his wife and their child. But this is, in any case, a book which lives in the moment, occasionally stopping to analyse and embroider. It is, above all, Fallada's incredible gift for storytelling which keeps the reader spellbound. And there is material enough here for 100 short stories: I loved the divertissement of the mad Baron who holds to hostage the staff of a Berlin hotel, and the oddly reassuring tale of the servant Elias who has started gathering high-mark notes together in the hope that they'll eventually be worth something again but ends up collecting them for their own sake, since money has lost all its value. 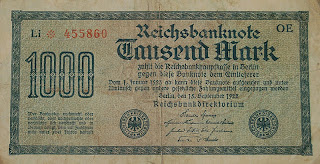 Anyway, these books are not only astonishingly faithful testimonies to the times in which they were written, but masterpieces in their own right, no doubt at all about that. On now to Little Man, What Now? and The Drinker.
Posted by David at 12:17