Fringe churches of the Norfolk fens 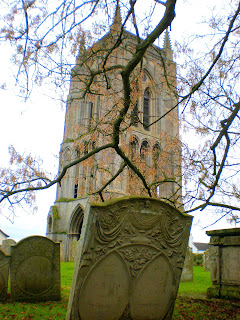 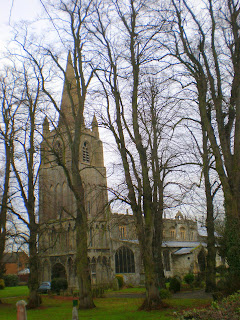 These are the two grand churches not embraced in our Walpoles to Wiggenhalls walk the time we strode out into the fens, in September 2009. And I can see why Jill hadn't incorporated them then, for the simple reason that both sit in the straggly development spreading from Wisbech, which of course is in Cambridgeshire. Wouldn't have been much fun to trudge along the bungalow-lined suburban roads. Walsoken actually has its churchyard divided between the two counties, but the bulding itself is decidedly in Norfolk.

Three days ago it was still freezing out in the flatlands. And St Mary West Walton was several degrees colder inside than out. A great contrast in this respect to lovingly-tended Walsoken, but not without its merits, combining the sparse interiors of those buildings looked after by the Churches Conservation Trust with the peeling fallen-on-hard-times charm of an edifice left in the care of a sparse community. Grand, anyway, it certainly was both in size and ornamentation, which looks northwards to Lincoln c.1240 (possibly begun 1225) and is rich in stiff-leafed capitals 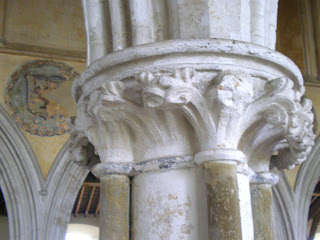 and above them painted decoration made to look like fleur-de-lys'ed wall hangings between the clerestory windows. There's a fine monument of a 13th century priest which was discovered by accident forming a step; no proof at all that he was the founder of the church, but so they like to think. 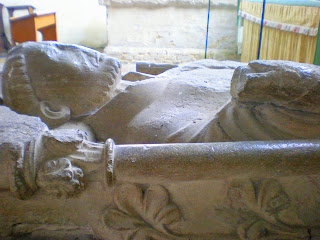 A corbel looking rather African sits in a cobwebbed glass case. 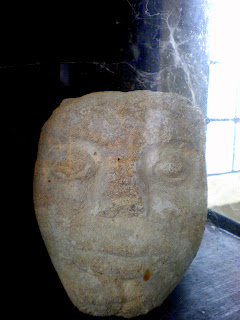 We found the leaded windows with their panels in many cases coloured by age the very picture of evocative wintriness, given the line of trees outside the west window 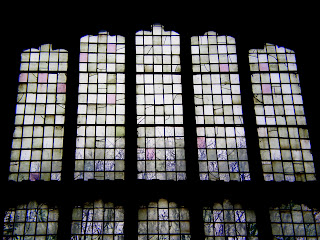 and the ghostly view of the separate tower through one in the south aisle. 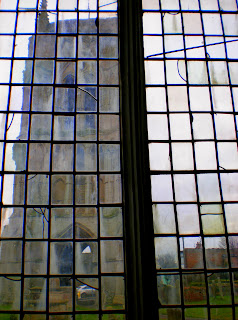 The tower was built to stand some distance from the lowish church itself some ten years later, so about 1250. 'The two buildings speak complex architectural languages,' writes Simon Knott on his always engaging and ever expanding Norfolk churches website 'as if one is at the start of a movement and the other at its flowering. It is rare to find two such strong Early English buildings in such close proximity.' Pevsner, as usual, is balder. 'It is pierced on the ground floor on all four sides. The arched entrances have much dog-tooth to the N and S; to the W and E they are simpler.' A shame he has nothing to say about the many splendid gravestones in the churchyard. 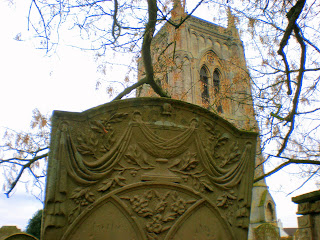 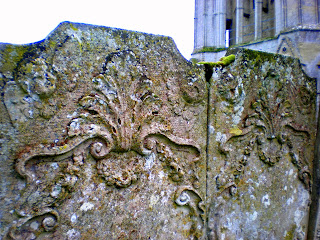 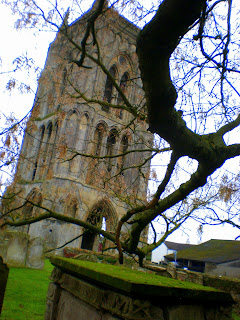 A total contrast, All Saints Walsoken is lovingly tended by its ageing parishioners. We met a couple out removing the numerous mini fir trees that had been adorning, and rightly proud the old man was of his care. Except that the floor in the north aisle had been renewed with a horrid kind of fake-tile lino which would last no time at all; not sure what the Norfolk Churches Trust would have to say about that.

Anyway, Walsoken is another sui generis gem: to whit, it boasts the finest late Norman nave arcades and chancel arch. 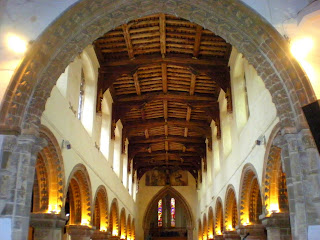 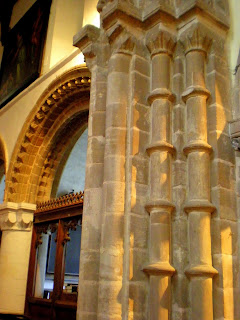 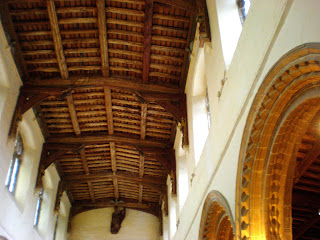 The fine roof of hammerbeam and cambered tiebeam has coloured figures in niches and lively angels, complemented at the east end by a wooden 17th century King David with his harp and just before the west tower by a jolly Solomon flanked by two 16th century paintings depicting his judgment. 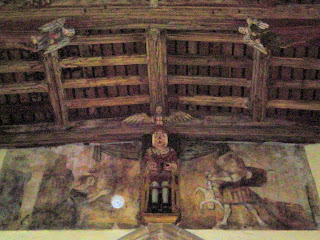 Clearly Walsokeners were fixated on this moral tale*, because there are two more roughly executed but rather fascinating 17th and 18th century pairs of pictures on the subject in the chancel. 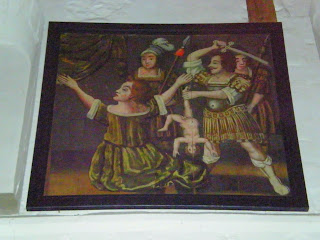 Not sure how much restoration is responsible for the figures on the bench ends here, but these are charming and well done, anyway, 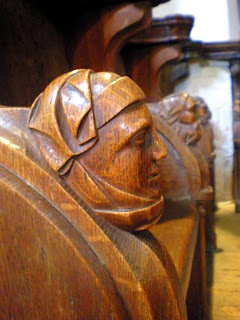 and there's a special treasure in the double figure representing prayer and activity (the sporty man is a fowler, evidently). 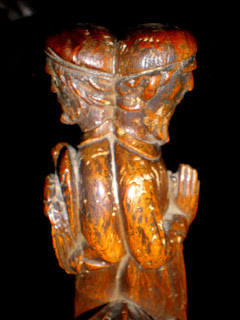 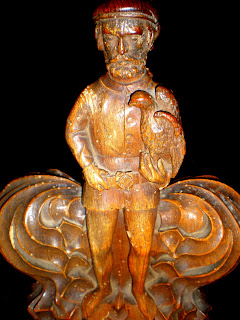 Walsoken's major gem, though, is its octagonal font, the Seven Sacraments featured being very much an East Anglian speciality. This is one of the latest, from 1544, with eight saints around the stem and the crucifixion making up the eighth of the main panels. 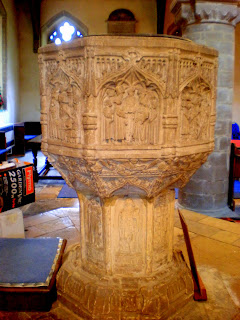 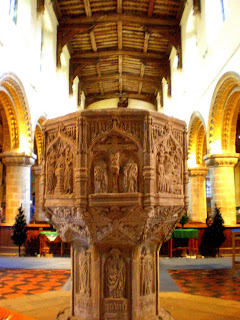 I ought finally to add another winged angel, from a very fine Resurrection window of 1903, to complement the much-admired specimens in Worcester College and Eastbourne's old church. 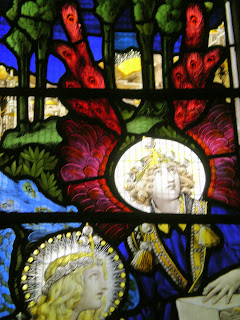 After these two major tickings off the list, our trail went a bit cold. We followed up a whizz around Wisbech by tracing the old, frozen Ouse to the connected villages of Outwell and Upwell (one side of the river in Cambridgeshire, and very Dutch in style, the other with the church in Norfolk). Both churches were locked, with the keys nowhere to be obtained at lunchtime on a Bank Holiday Monday, but it was worth looking at Outwell's old tower and corbels 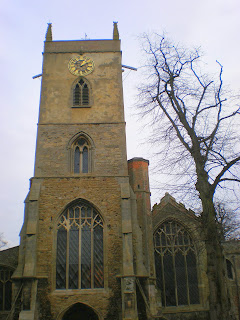 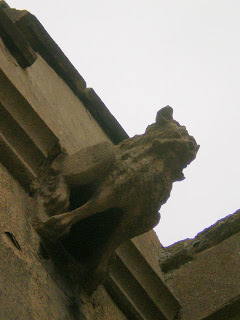 and we now have another reason to return on open day, the extraordinary little shop opposite. 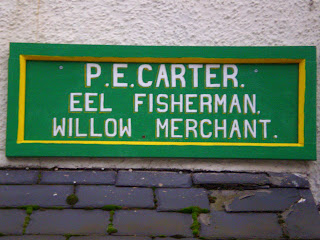 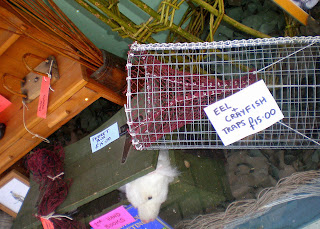 Upwell had the more handsome exterior of these two riverside churches, a fine set of gates, and more splendid headstones. 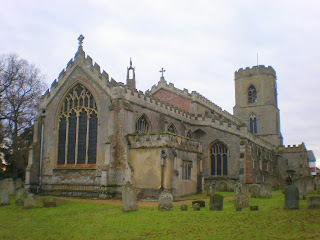 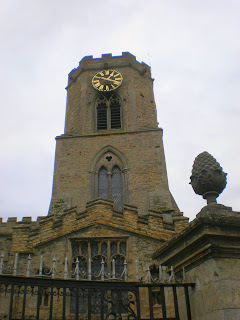 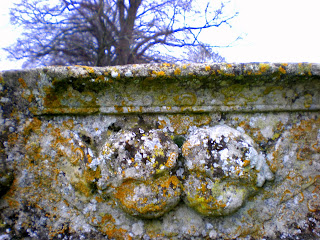 We passed the chance of microwaved food in the local pub and didn't fare much better at Welney, but were otherwise well fed during our stay, both at Jill's in Lynn and at Susie and Michael's in Hindringham after their concert. Which was a real pleasure on a bitterly cold night in Wells-next-the-Sea. I doubt if the locals who turned out in very respectable numbers have ever heard Hindemith in the community centre, let alone S. Self's and M. Christie's compositions. It was a generous programme shared between mezzo, cello, guitar and piano around memories and pictures of Susie's distinguished grandfather John Drinkwater. Here are the Christie-Selfs at home after their labours (centre and right) with their excellent pianist, John Flinders. 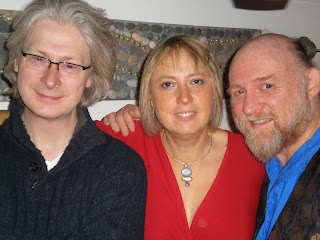 Don't forget that the warm and hospitable Selfmade Music set-up plays host to a whole range of courses throughout the year. You'll be well fed as well as excellently coached if you decide to take up the option. More details here.

*uncannily reproduced in a current Eastenders storyline which has combined cot death with childsnatching, much to half the nation's chagrin. There was a balanced discussion about it on Radio 4's Any Answers this afternoon, in which the experience of some of the female callers added authority to the pro- and contra- arguments. I haven't seen it, but I can well imagine the excellent Jessie Wallace acts her socks off.
Posted by David at 12:17

Utterly delightful, informative and well illustrated. A couple of half-forgotten corners of our national heritage. Thanks for sharing this with us!