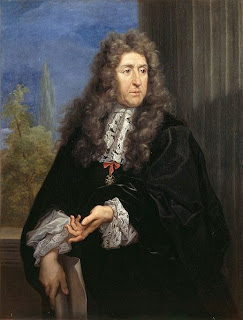 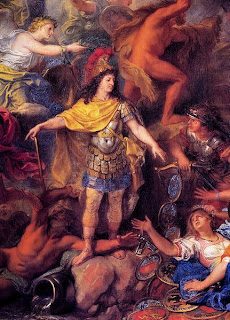 Without Louis XIV, no gardens at Versailles, I guess, and no landscaping genius like Andre Le Notre (pictured first, of course) to be given the means to create them against all the odds of the king's capricious interference. But it struck me, reading Ian Thompson's excellently written book The Sun King's Garden how perplexing are the links between autocracy and the right for us pygmies to enjoy the best of everything (and the public have been doing that for free in Versailles' great outdoors since the French Revolution). I feel, once again, like young Hyacinth in Henry James's The Princess Casamassima , wondering at the great works of art but vexed at how they came into the world. 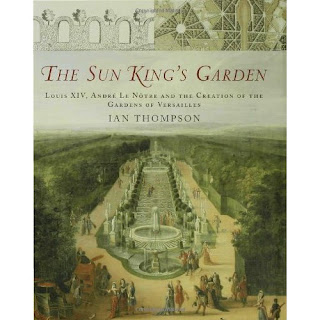 Writes Thompson in his Epilogue:

What difference does knowing the history of this place make to its enjoyment? Do we admire it less when we realise that it was a piece of propaganda and an expression of power? Are we troubled when we read that thousands of troops gave their lives in a futile attempt to get the fountains to run all day? Knowing that an immense amount of toil and suffering went into the creation of Le Notre's masterpiece can only increase the grip that this serene and stately place exerts upon the imagination. There is not a single tree alive at Versailles that was planted in the time of Le Notre, and even some of the statues are copies or restorations - the lay viewer has no way of knowing - yet the sense of continuity is palpable.

It's amazing that as much has survived of at least some of the 17th and 18th century garden design (there's been an ongoing project to restore Versailles to how it looked late in Louis XIV's reign). The Sun King built up such avowed wonders as the Grotto of Thetis, only to pull them down and replace them with another testament to vanity. Sheer hubris, much of it. Little did I grasp in late December when I looked down towards a frozen Piece d'Eau de Suisses, expanded from a village duck pond to a giant mirror of water the size of nearly 40 football pitches, what Madame de Sevigny - her letters are next stop - described as 'the prodigious mortality of the workmen, of whom every night wagons full of the dead are carried out...'. That makes it more than usually monument-like in winter. 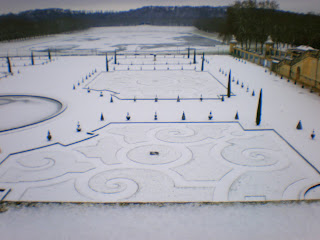 Worse was the attempted diversion of the River Eure to keep up the water supply - still short - for the profusion of fountains, which led to an estimated 10,000 dead from malaria and accidents (no health and safety in those days). While the big-lake men had been Swiss guards, these were staple army cannon-fodder, and their deaths led to a shortage in the imminent, disastrous military campaign. 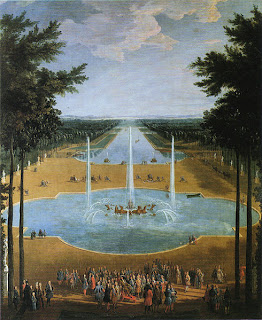 Autre temps, autre moeurs, to be sure. But thankfully we can all take our pleasure here, as at Vaux-le-Vicomte, Fontainebleau and Chantilly - three places we're going to see with friends Laurence and Bertrand in the spring. When rhe river gods and goddesses will, of course, no longer be trailing icicles from their mythological personages. 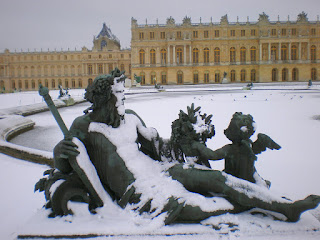 About these, incidentally, I learnt something else from Thompson: their handsome recumbent poses were designed so as not to block a clear view across the parterre to the great avenues below and beyond. Obvious, perhaps, but striking.
Posted by David at 13:31

This post reminds me that Mao, another great tyrant liked to cruise in his specially designed jeep on Tian An Men square after a military parade so the people could see him up close. The only problem was that hundreds got crushed in the rush to see him. Did he care about lack of crowd safety, no not at all. When asked once about it, he replied: There are so many Chinese who will miss a few less.

Nothing against Mr. Thompson, but recumbent poses for river gods go back to the Romans who virtually always had them reclining, probably to relate them to the horizontal topographical features they represented. Poseidon was shown standing or in some other upright activity but his land-based brothers tended to be more leisurely types

Is anyone saying they didn't, Will? The only point, which maybe I should have enlarged upon, is that in this instance the Versailles Parterre previously had standing statues which interrupted the vistas and the river gods and goddesses, a later addition, changed that perspective. Their origins are another question altogether, but thanks for the clarification anyway.

Louis XIV built Versailles, only using Le Notre and many others.

These houses and palaces were government houses, where power was centred and exercised. And the Pentagon, or the Ministry of Defence in London, are just as enormous even if less beautiful. Once one accepts the heriditary principle - as history dictates - the fact the the ruler built a large house is not just a sign of personal extravagance

Does anyone know a biography of the statecraft of Louis XIV? I have taken advice at high levels and there does not seem to be anything modern or - more especially - penetrating in the analysis of his political and diplomatic skills. We can too easily be dazzled by the house, a tremendous sign of his genius though it may be. And what a training in the business of government he must have had from Mazarin. ( I read recently that when Mazarin was dying he walked round looking at his pictures - and saying "goodbye" to each of them)