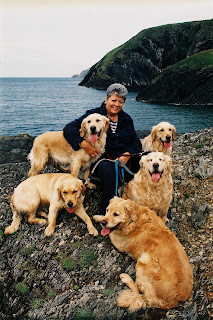 I've said most of what I wanted with a few YouTube sound-clips on The Arts Desk, and in a footnote to the Rosenkav celebrations here. But since I haven't stopped listening, in between Berlioz snippeting, to the great lady, here are just a few words on Margaret Price, whose death last Friday marked the departure of yet another of the 20th century's great voices (in fact, if I remember rightly, when asked by the BBC Music Magazine for my own list of 20 great sopranos a couple of years ago, I put her third after Maria and Joanie).

I had a crazy idea of going down to the small seaside town in Wales where she bred dogs like the golden retrievers above - photo courtesy of Malcolm Crowthers - to bend the knee, but it's too late now. In any case, the voice is the thing, and what a lot we have to remember her by. I've noted that I still need to get her French chansons disc, and the latest Wigmore CD - I was there, and still count it the greatest song recital of my life - but I think I've got a fair few of her performances on disc and LP. 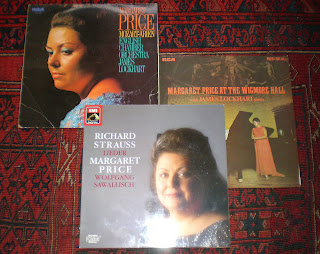 These three are perhaps the most treasured. The Wigmore Hall 1971 recital embraces what Roger Neill regards as a Price peak, Liszt's Three Petrarch Sonnets. Such strength combined with such radiance is, I think, unique among sopranos, and exactly what we got in her Wesendonck Lieder (that was when I went off the rails and hazarded for the Guardian that she was probably 'the most complete soprano of our time'). Yet equally good, and more unexpected, is her way with Russian in Musorgsky's The Nursery - and indeed, she does catch the child within without the archness. Some of the other songs on the LP - Bellini, Donizetti, Verdi, Rossini - didn't make it onto CD, so the original's worth keeping.

Surprisingly, much of the song repertoire isn't as yet to be found on YouTube. I was also reminded of her achievements in English rep - Mary's 'The Sun Goeth Down' in Elgar's The Kingdom, the eerie voice in Vaughan Williams's Pastoral Symphony and Cathleen in his not-so-hot Riders to the Sea (only the contralto, Helen Watts, really gets the goods here). Now I need to reinvestigate her Schubert and Schumann. This is something, though: the loveliest Lied ever written, Mahler's 'Ich bin der Welt abhanden gekommen', sung by the most beautiful voice - and what ineffable long lines towards the end.

Of course that Mahler made me want to cry. Her facial expressions say it all, but it's remarkably well controlled too.

Although, in 'Riders to the Sea', Price got one of the greatest lines in any opera libretto: 'It's getting old she is, and broken'