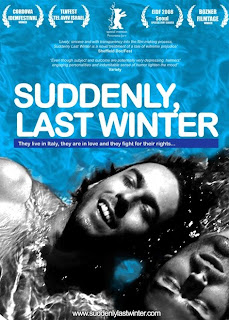 Here's a sober, if charmingly directed, take on the abuse of the religious wisdoms so beautifully stated in Of Gods and Men, since it highlights the Vatican's nonsensical 'crusade' against the rights of same-sex civil partnerships in Italy (where else does religious authority interfere in legislation to the same extent? Only in Islamic theocracies). To make Suddenly, Last Winter (Improvvisamente l'Inverno Scorso) Gustav Hofer and Luca Ragazzi followed their impressions, and the healthy conflicts in their eight-year relationship, offbeat-documentary-style through the year of government shilly-shallying over the bill for the so called DICO that would have given them the same rights we have in so many other European countries, or something like them. 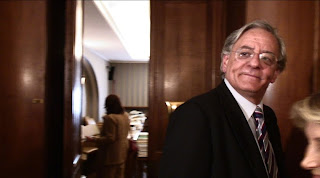 The Jarndycean to-ing and fro-ing in the Senate (Cesare Salvi pictured above) is amusingly covered, with a light touch backed up by quirky music for wind quintet. But the Vatican's various statements that legalising loving relationships will lead to 'incest and paedophilia' as well as pose a threat to families are shown in their full impact not just on extreme religious groups but also on the widespread support for the truly creepy 'family day' (fine, celebrate the family, but don't use it as a pretext to oppress people who are different from you). Luca states his reluctance to hold the camera in no uncertain terms, while Gustav unassumingly puts the questions to sundry bigots and nearly gets beaten up on one demonstration. To balance that, we see the huge crowds and hear the impassioned speeches - including one from a spirited old priest defrocked by the Vatican - at political and Pride rallies. 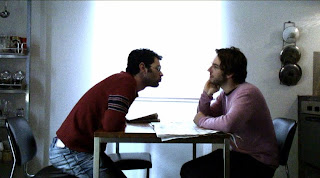 Luca's feelings are familiar: we're protected by the microcosm of friends and family, but out there they hate us, and why? It's that curious feeling that we're living in the modern world and centuries ago simultaneously. As for one commenter's suggestion here that I really ought to read the doctrines and arguments of the Catholic church, why on earth should I when their unChristian, uninclusive attitude on social issues is built on such ill-considered fallacies? For, of course, it's not an 'either' 'or' situation. And, however many may argue that a child needs a father and a mother, families now come in all shapes and sizes, sometimes very large extended ones (two mothers, two fathers, plus close friends, in which respect we've been honoured to participate in a small way in the upbringing of our loved ones' children). 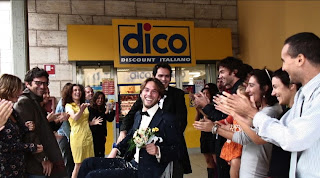 It's easy enough to comfort ourselves and say, well, Gustav and Luca will be fine; this is Italy, anyway, with its own version of America's Obama/Palin polarities, and just look at Berlusconi (no, not a harmless old clown, very far from it). But even when won, civil rights remain fragile, and tolerance is not the same thing as acceptance. I'm glad this often very funny film is able to put its points across more elegantly than I can. Ultimately, it remains optimistic. See the very detailed website and/or watch the trailer:

*stop press: good on Judge Rutherford, who found against a couple of hoteliers in Cornwall for refusing a room with a double bed to a gay couple. Summing up, he said of the 'Christian' hoteliers: 'I am quite satisfied as to the genuineness of the defendants' beliefs and it is, I have no doubt, one which others also hold. It is a very clear example of how social attitudes have changed over the years for it is not so very long ago that these beliefs of the defendants would have been those accepted as normal by society at large. Now it is the other way around.' Amen to that.
Posted by David at 10:20

I had a conversation with my psycho-therapist which I am planning to write a little something about for my blog but in light of your posting I think I'll share a bit of it. He told me that he often asks his gay clients a question: if there was a pill that would guarantee that you wake up the next morning straight, would you take it? 85% of his clients - 90% of whom are Italian - say "yes" without hesitation. That fills me with sadness.

Me too - because it must mean that they don't know, or haven't known, true love. Isn't it as simple as that?

@Willym - it's a interesting question isn't it and I'm shocked at that figure. It would make for an interesting wider, even global, survey to try and look for correlations.

David, thanks for this. Love maybe, acceptance definitely, if there' a difference.

On second thoughts, the 'study group' is made up of those undergoing psychotherapy and the results therefore less surprising. No reflection or imputation on psychotherapy meant, except to say it is not very common down here.

You're right, Wanderer - you can still be accepted by loving friends without having The One. I was actually thinking how impossible it would be to say you'd take that pill, though, if you could truly think of being with no-one other than the person you were with.

Love the spider's webs and the mists down under, by the way.

Not to mention acceptance of self, which is sort of where I was heading.

"where else does religious authority interfere in legislation to the same extent?"

Perhaps not to the exact same extent, but elections here are more and more being manipulated by various Christian sects. The Mormons (a cult according to some ultra-right Christians) pour hundreds of thousands of dollars into various campaigns and initiatives to strip gay men and lesbians of the few rights we've managed to achieve.

The pope has on several occasions threatened to refuse the sacraments to Catholic legislators who vote anything but the Catholic Party Line, and did so with Patrick Kennedy in the state of Rhode Island. Religious interference in the political process is alive and well in the USA.

Will, your pictures of the dismantling of the arts and the rise of the religious right in all spheres are dispiriting, but at least they come from someone who lives there.