Why we need The Arts Desk 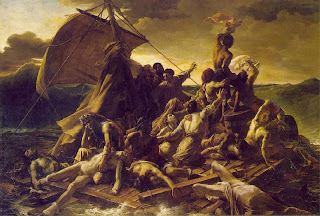 OK, so picturing arts coverage in print as a sinking ship, and even metaphoring our thriving online Arts Desk as Gericault's struggling Raft of the Medusa, is a bit hyperbolic. But it struck me just how much the set-up to which I've become so devoted has thrown out a lifeline in the sea of sinking arts pages.

The only time I buy papers is for a train trip (sometimes). Otherwise I might just look up the odd colleague's review online and go to the BBC for news. Should have known better than to pick up an Observer for the Sunday journey to King's Lynn. In the colour supplement there was a fatuous piece about the Top 20 cultural 'don't misses' of 2011. Was there a single concert or opera in the whole batch? Of course not. As for the paper's Arts Review, well, I know it's a fallow time for 'classical music' and the regulars were on holiday. But apart from Peter Conrad's piece about the mess that was Anna Nicole - which seemed to be entirely about her Traviata-without-the-redemption life, and not at all about what Turnage and Jones might make of the story at the Royal Opera - nothing.

Not even a bit about Radio 3's twelve-day Mozartfest, which I thought could do with a bit of a Buzz on The Arts Desk today. And, very well, we've not exactly been teeming with concert or opera reviews either. But I did try to fill the breach with an as it turned out ill-advised 1/11/11 trip to the Gabrielis' Wassail at the Globe (not entirely wasted: the initially stumbling thrown-together pottage did pick up in the short second half, when Paul McCreesh engagingly filled us in on the village bands of Thomas Hardy's Under the Greenwood Tree). 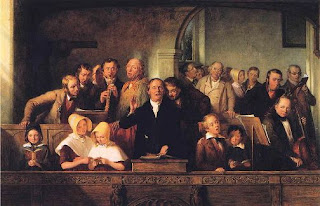 TAD also had its pick of the classical/opera year on the 31st. From tomorrow, the concert scene begins to stir again. But the papers really are floundering, though nowhere near as badly as in the States. Still, the Times does the best coverage and the Telegraph, by all accounts, has an arts editor who's as painstaking with his contributors as our Ismene Brown and Jasper Rees. But when will the more out-of-touch pundits realise that 'classical music and opera' shouldn't be marginalised some way down the line from 'music', and why is it so hard to find them? No, I think we're doing the right thing by featuring each event as and when it appears. Sermon over.
Posted by David at 12:25

Here I was wishing I could partake of the Gabrieli's punch bowl and now finding that maybe it was missing a dash of nutmeg or a pinch of orange zest. Too bad it did sound so promising.

If they get another shot at it, Will, they might do better - not enough rehearsal time, I fear, which isn't good enough when top tickets were £30 a throw for two halves of half an hour each. Mind you, the groundlings' perfectly respectable £5 would have made it passable.

Yep. Arts Desk now the only essential reading for news and views.

The NY Times was in severe free-fall for a while as far as (real) arts coverage is concerned but has managed to stabilize in the last couple of years.

Particularly when it comes to opera, there will be one or more analysis/interview pieces before and/or after an important new production of revival. There is a main critic (Anthony Tommasini) and at least two second stringers. Mr. T is held in low repute by some who feel he tends to gloss over less than stellar performances, and massage the MET's managership, but have noted that some of his detractors nurture very set agendas and will unlikely ever be satisfied.

Our situation with "classical" music and opera on radio is dire at the moment. In the greater Boston area it did radically improve recently when our great WCRB, which had been dumbed-down to the level of elevator music, was acquired by the local Public Broadcasting station: vocal music returned and the (extensive) list of "forbidden" composers was dumped.

The situation worsens in direct proportion to the elimination of art and music classes in our schools. Our newly resurgent Republican control of things in Washington DC will soon be dismantling even more of whatever pathetic funding for the arts remains. It is a sad time.

Interesting report, Will. Here, while we await the worst from our own compromised coalition government, the scene on all fronts has in fact never been healthier, unless I'm living in a fool's paradise.

Yes -- different cultures, different mind-set. Here the "high arts" are said to smell of elitism. Anything that involves correct grammar and music by actual composers is considered highly suspect.

By the way, I am still stunned by Marina Poplavskaya's Violetta last night in the Decker production at the MET. I believe you have had this already at the RHO?

No, we're still stuck with the tired old Richard Eyre production. I did see the Decker production on DVD with Villazon singing his heart out and Trebs very good indeed until Act Three. Pops underwhelmed in Don Carlo here, but had her moments in Boccanegra which suggested that she could yet pull it all together, and it sounds as if she might have done (but surely she can't do the coloratura any more than AN?) Lovely hair, anyway.