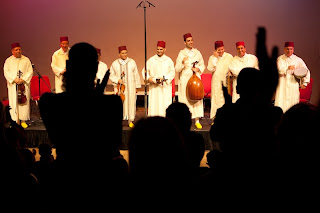 True, there's already a large Moroccan community, in Ladbroke Grove and the splendid Golborne Road, to be precise. But until Wednesday night, I doubt if they had been treated to such distinguished musical visitors as the members of the Fez (Arab-)Andalusian Orchestra, pictured above at the Tabernacle for the BBC by Simon Jay Price (who also took the next four photos below). It was the central part of the BBC Symphony Orchestra's Diverse Orchestras Week 2011, and it turned out to be far and away the best of the cross-cultural meetings I've attended. Read all about the riotous evening on The Arts Desk. While the highlight was hearing pure tradition in the hands of the world's best exponents, I still can't get over the dazzling appearance and the soulful musical sound of the BBC Family Orchestra, players of all ages, abilities, colours and presumably creeds. 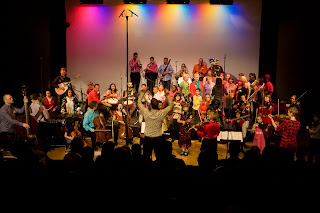 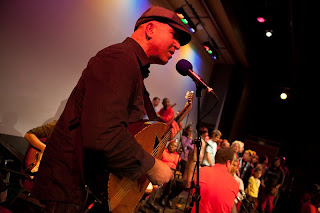 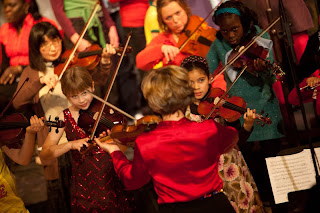 Unfortunately I can't go to Maida Vale tonight to hear the Fez men's second concert, this time with the entire BBC Symphony Orchestra - I have a date with Russian women in a Siberian labour camp, courtesy of Moscow's visiting Sovremennik Theatre - but I look forward to the broadcasts.

We'd been well primed for the visit on Tuesday, with a guest appearance on my BBCSO course at the City Lit from Dr. Carolyn Landau, ethnomusicologist and Leverhulme Early Career Fellow at King's College London> A pioneer of the brilliantly organised website collecting Moroccan memories in the UK, Carolyn is the perfect mix of precise knowledge and passionate enthusiasm, so I learnt a lot about the different types of Moroccan musics and hope she'll be able to set up a little course on Music and Islam at the Lit.

I felt better prepared to understand the stunning Fez Andalusian players' preparatory improvisation on their chosen maqam or mode, and much enriched by knowing that each singer/player does his own arabesques around the theme, which may sound haphazard to western ears but once you get used to it can be heard for what it is, a healthy form of heterophony. The group's consummate lead singer, Aziz Alami Chentoufi, is pictured here second from the right. How could you not covet, as I do, a pair of the yellow slippers, apparently rather expensive because of the (saffron?) dye. 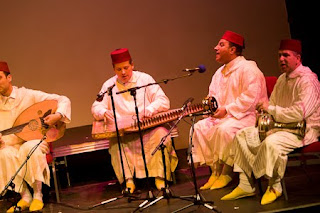 On Tuesday, we had a whistlestop tour around the leading types of performance in Morocco, dictated to a certain extent by the divisions of its mountain ranges, with examples provided from the splendid collection of the much-travelled Jean Jenkins. You can hear them in 'the map' section of Moroccan Memories. I was especially fascinated by the Gnawa or sufic music, originating from sub-Saharan Africa, Mali included, as this old postcard reveals. 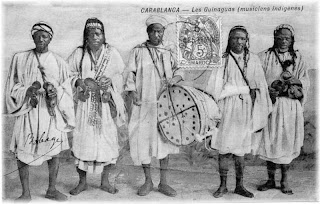 There are haunting sounds here - the low tones of the gumbri, a three-string bass lute (not pictured in the above line-up, but an essential component these days), and the hypnotic clashings of the qaraqub, iron castanets. The idea is that the sick person to be treated dances until he or she falls down in a faint, and we saw something of this in a film provided by one of Carolyn's colleagues.

Too much to report here, but watch this space: Carolyn has some friends who've just done up a Riad in Meknes, running short courses in cookery and things cultural. Whether or not we take any of those up, or just stay there before going on to hike in the Atlas Mountains, I can't say yet, but I feel a trip coming on.
Posted by David at 09:42

It was an incredible experience to play with such good musicians, and to sit and listen to music I've never heard before. Thanks for all the enthusiastic coverage.

great performance at the tabernacle
do hope it is on the radio or tv
but when?

I'll check out the details of R3 relays, some time in the future, I gather. A selection went out on the European Broadcasting ?Service? on Monday.

And they're looking into rights issues re putting up the Family Orchestra slot on YouTube.