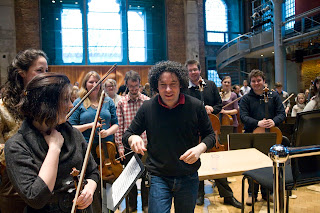 What a relief it was to have Gustavo Dudamel's galvanizing Friday lunchtime workshop with young London musicians in the airy Hawksmoor surroundings of LSO St Luke's (all photographs here by Rosie Reed Gold) to offset against his all too earthly LA Phil Mahler Nine that night. I was able to do what, for want of a more polite term, is known as a shit sandwich of a review for The Arts Desk as a result.

Not that the Mahler was at all badly played, and it even rose to something more spiritual in a not inappropriately pressurised finale. But to see what the messianic motivator could achieve with musical youth - and he, or rather the Venezuelan sistema of which he is the most media-friendly representative, has everything to do with the future of classical concerts - would have made even the sceptics melt. 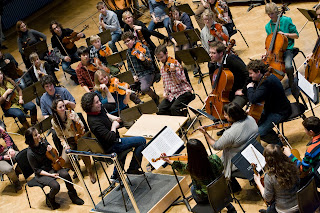 What I couldn't do for TAD, given the double-review, was enumerate his points. And I'm not sure I can very well now, as my notes are fairly illegible. But I want to try, if only to preserve the essence of those scribbles in the memory. To be honest, he could have gone through the same shtick with any group of players. But the point is that it got results, and it left everyone - players, audience, media hacks - all grinning inanely.

And so, after an approximate if exciting playthrough of the final Allegro con brio of Beethoven's Seventh Symphony, Dudamel took it apart so that we could all see how it worked. First, the opening rhythm, short and clear, 'like striking a match', then the main idea, with more tension and less bow, an 'arrogant I want!' - and how revealing it was to hear every strand in the textures as he got each group to play separately. The second group of eight bars was too slack: more precision needed. Then the legato phrase, even throughout - no dropping off as the phrase came to an end, and no slowing down in the expressivity: 'there's no need to play rubato if you're playing espressivo. And with vibrato, please - without, it's empty, sad' (not sure Gardiner et al would agree). Then the famous phrase, which he'd used in our phone interview about the Tchaikovsky Fifth, about 'swimming in a honeypool'. Underneath the lyrical phrase, the second violins needed to sound almost rebellious. The tremolos had to be put across with as much bow as possible. 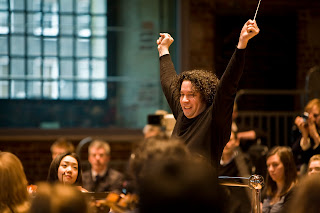 For those dotted rhythms, piano, punctuated by forte chords (B in my score), he got the strings to play first the pianos, then the fortes, then put them together (gosh, that worked). Referring to the woodwind's sustained harmonies in the first big crescendo beginning at bar 90, he quoted Barenboim as to how the 'harmony is so important for the intensity of the rhythms - the changes give the intensity to build the rest of the phrase'. Towards the end, there was some dissent about whether Beethoven wanted ff or fff - it depended which score you were using, Dudamel didn't have one for this and he could have done with it occasionally, but anyway he wanted the fff. And for the ultimate crescendo, everyone had to rise to their feet with the growing excitement - such fun to watch - and then reproduce that inwardly, as it were. 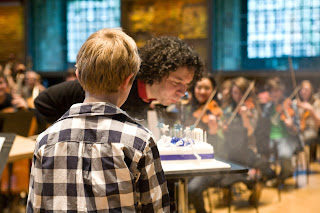 I've already written about the epilogue-speech Dudamel made on being presented with a cake two days after his 30th birthday. The ideas were none the less moving for being reiterated, since he means them: music is a fundamental human right; playing in an orchestra is the best model for a good society; remember this joy when you've lost it doing routine work in your 30s or 40s; and try to carry out even the smallest tasks with passion. Yes, I buy that.
Posted by David at 11:04

When asked by my richer friends about the education of their children - increasingly nowadays, grandchildren - I always recommend choir schools as prep schools. This recommendation does not depend on the offsprings' being actual choristers. In a choir school the boys and girls can see the results of a good discipline, otherwise something they have to take on trust; and the value of the pursuit of beauty, and of the values in music. And I can now add playing a part which models a good society: even if not in the choir,
the society is all around them