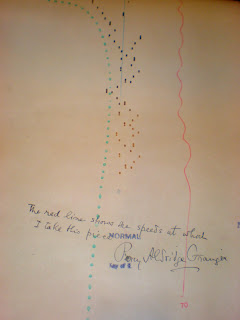 Better half of one evening in four among the Kings Place Grainger celebrations was a pianola demo by Michael Broadway "playing" Grainger. And he was right in what he said: there's some artistry in operating the machine, as befits a London College of Music-trained organist and viola da gamba player (some leap!). The visible demonstration reminded me a bit of our friend Cynthia Millar and her ondes martenot (back for a Messiaen Turangalila next season).

I've written at some length about this on The Arts Desk, and as little as possible about the - now I can say it - well-nigh-disastrous wind band event that followed (I tried to be diplomatic, but got much nastier comments for leaving half way through, something I've never done before while writing about something). I've so far bitten my tongue there when I wanted to respond that the article was supposed to be about Grainger on the 50th anniversary of his death- which was yesterday - and only about those players inasmuch as they reflected The Glory of Rome and the Christian Heart, an antiwar fantasia (they didn't). And so this is, too.

I put up something on the blog about PG's weird, warped greatness after Bengt Forsberg wowed us with To a Nordic Princess as an encore (!) at the Wigmore. That prompted me to read up and listen (to most of the 19 CDs in Chandos's collection) preparatory to a piece that in the end didn't happen. Anyway, it got me loving the wind-band pieces which Percy came to after his time as a US army bandsman (the nearest he was prepared to get to the war given pacifist convictions completely lost on Friday's players). 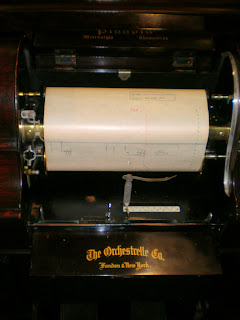 And I do continually marvel at Percy's pianism, both on the recordings he made - what a shame there's not more film of him in loose-limbed action - and the Duo-Art piano rolls. Loved the rollicking In Dahomey and the wacky Holbrooke pieces Mr. Broadway featured in his programme - and, of course, a special affection goes to a transcription he didn't include, the Rosenkavalier Ramble. Which I first heard played by that passionate proselytizer Ronald Stevenson at the 1982 Aldeburgh Festival when I was a Hesse student.

I'll nae forget Stevenson, in the audience for one of the Grainger concerts he wasn't playing in, tapping us youngsters on the shoulder and saying 'did Stravinsky ever write a melody like that?' Well, actually he did, I'll be hearing one such tonight when the Berlin Phil and Rattle play Apollon Musagete; and the two composers have more than a little in common. As they do with Strauss, but that's another story. Anyway, since both Rosenkav's 100th birthday and the Grainger anniversary have almost coincided, here it is, the free fantasia on the final duet. I have a suspicion the role doesn't match what sounds to me like the Nimbus studio recording, but the sound is good, anyway.

Do people still buy pianloas? Why?

Well, there aren't many left. But I'd love one. The idea that you can have the ghosts of Rachmaninov, Prokofiev, Horowitz etc rattling away on your keyboard, and that you can have a measure of control over what they do, is immensely appealing.