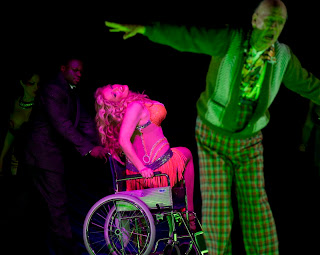 It's actually something about 'harshing the vibe' which a transfigured Royal Opera Chorus sings in the company's smash-hit unveiling of Turnage's Anna Nicole. Librettist Richard Thomas certainly has an energetic finger on the pulse of American patois and cliche, and the lively filth which strews the racy first act doesn't outstay its welcome as did the childish repetitions of the tedious Jerry Springer: the Opera.

Plus, of course, Anna Nicole has much better music. Better even than I thought I was going to get this time round from the fitfully brilliant Turnage. It was back to the febrile pop-synthesis of his first great success, based on Berkoff's Greek, rather than the would-be respectability of The Silver Tassie, with its unforgiveably bad trenches scene redeemed by some superb music in the last two acts. But above all, it struck me how Turnage was tapping into what's always been his deepest suit. In amongst the fluent big-band false highs and the trashy neon there pulses the elegiac saxophone-drenched music which made me want to sob in his concert-hall masterpiece for jazz group and orchestra Blood on the Floor.

And this makes sense. In the lamenting slow movements of that work, he grieved for the brother who died of a heroin overdose. That's possibly why the most moving scene - and there are quite a few - in Anna Nicole is the one in which the misguided model's teenage son Daniel (Dominic Rowntree) comes back to life and sings a little list of all the drugs in the book. It actually works better, I think, than the abrupt end of the opera, but that's not bad either. Rowntree as Daniel is pictured below among Bill Cooper's production shots for the Royal Opera in the scene where Eva-Maria Westbroek's sympathetic-from-the-start heroine still craves the public adulation while her scumbag lawyer-boyfriend Stern (Gerald Finley, still too nice as always) plots the ultimate exploitations in another subcutaneously wonderful set-piece. 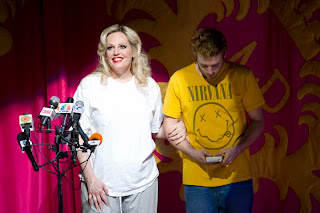 Did I say sympathetic-from-the-start? Well, I'd never have believed it, but the morality-tale model who crashed and burned so publicly does what she never did in any of the tabloid reports and makes us understand her own particular road to an American-dream fast buck. That's partly due to the goofy, Marilynesque charm Westbroek applies, which is never there in any of the real-life photos (I've not seen footage of ANS in action). 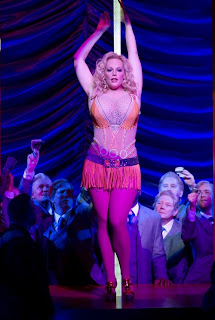 You do really believe that as a mother, she did what she could in her own uncomprehending way; that the marriage to nearly-nonagenarian J Howard Marshall II (Alan Oke, excellent in the role that Philip Langridge would have played so well) was clear-eyed on both sides; and the grind of low wages is, in any case, brilliantly summed up in a bluesy procession of Houston WalMart zombies.

There was never going to be any doubt that the winning team of Pappano, Richard Jones and top singers - a recipe so brilliantly served up this time last year in their perfect production of Prokofiev's The Gambler - would do it all the fullest justice. Jones adds to his armoury of Smileys and animals (this shot, I think, is by Tristram Kenton, who sees more of the bigger picture) 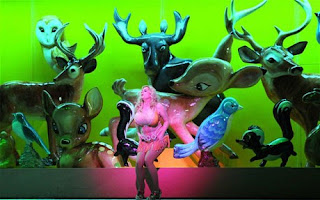 an ever-waxing team of sinister black cameraheads, and as usual knits everything together with splendid symmetry. Pappano seemed to believe in what he was conducting - the big Act 2 interlude burns - and the brass's big band sound was worthy of John Wilson. The ensemble includes some of the music-theatre names Jones likes to work with, and there's a blazing turn from Sue Bickley as Anna Nicole's morality-chorus Ma (pictured below with Westbroek). 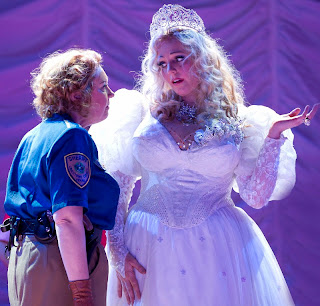 In fact those two set me thinking: the Pappano-Jones partnership's next venture HAS to be the Brecht-Weill Rise and Fall of the City of Mahagonny. Westbroek would play Jenny, possibly to Jeffrey Lloyd-Roberts's Jimmy Mahoney (give the guy a break, Covent Garden). And now that Anja Silja's just that bit too old, Bickley would play the Widow Begbick. That would be the perfect follow-up to this very Weill-for-the-millennium show.

Which, by the way, is very definitely an opera in its fluid/abrupt quick-changes as well as the demands it places upon the singers and orchestra. You may not come out singing the tunes - except the deliberately and ironically skewed homage to Copland's Fanfare for the Common Man - but melodic lines there are, and often very beautiful ones. Even if the end result is hardly profound - nor is it meant to be - the show's demands are too complex for the extra-operatic West End rep, and I'm sure that Jones, Pappano and Turnage will keep it to themselves at the high level it's given here. But it will be back, it looks like it's going to be filmed, and no doubt it will make it to the Met, too.
Posted by David at 09:14

Ha! I've just finished writing about it myself, having seen it tonight.

You write with flair, as ever, Jon, so we're not truly at loggerheads. Have duly countered Over There. But the bottom line is, I cared more than I expected to, and shed a tear or two, and you didn't.

Yes, but "flair" and "loggerheads" in the same sentence isn't great English, David. And you shed so many tears, you give the sense they're a bit fake. If you don't mention them at all it might come across as more authentic...and help the writing up to become finer in the way that most critics often dispairingly never give a mega toss-regard for. Just a point in the debate!

ps: and that "comically", "conclusions" and "elements" all mashed together in one being just as bad!

You're all as nuts as each other, and wonder why we don't read you.

erm - I suppose I shouldn't feed a troll who writes 'dispairingly' (sic), but I can't for the life of me see why 'flair' and 'loggerheads' shouldn't be seen in the same sentence, let alone be 'bad English'. I haven't got the time to go back and check what's the problem in the other point.

As to the tears: sometimes they come, sometimes - ie at last week's Lied von der Erde and Carmelites - sometimes not. They're not fake, I maybe give into them too easily but I regard them as a good test of whether something that's actually supposed to do that works for me or not.

No-one asks you to read 'us', whoever 'we' are. Some like it, those that don't have plenty of other places to go: while some blogs may be self-advertising, others are there to follow or ignore according to taste. This isn't the same thing as the Arts Desk, after all, just a personal impression.

Yes, two "l"s both on the rhythm might require a rethink in your ear, if you listen. If you come up with an alternative and instead, contrasting sounded word for either then that will both help to improve the thought for you, and double, making a far more enjoyable and clearer read. It is great, if you try it.
Well I shall hit you - with my leaf. Quits on sense of humour? Was good to catch a blog on music, anyway, but it was only writing advice because your meaning is hard to get in places - and this is due to style, not content. Only trying to help, though on the internet, tone can never be understood.

Bizarre - maybe I'm being obtuse, but I understand even less in your second lecture on clarity. I wonder who it is sets up as a style guru unbidden, though the tone is oddly familiar.

If I grasped your points and thought it helped, I might think differently. I'm always amenable to factual corrections and the shedding of light on corners which remain obscure to me. But I can't see how that's the case here. So let's perhaps leave it at that.