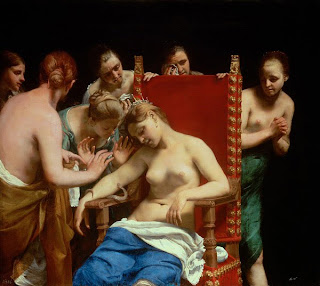 Only connect - Berlioz's first score of total bloody-minded genius, La mort de Cleopatre is really about Juliet after all; and so it's back to my idee fixe of last month. I listened to it again - Janet Baker with Alexander Gibson, both electrifying - in preparation for tonight's pre-performance talk before the LPO concert conducted by the electrifying Yannick Nezet-Seguin, another born galvanizer, with statuesque Anna Caterina Antonacci as the serpent of old Nile. Do come along to the main Festival Hall auditorium at 6.15 and I'll take you through some of the extraordinary sounds Berlioz gave birth to, in later composers as much as in himself. It's a help that Ravel, the other greatest orchestrator of all time, shares the programme.

So. Not only is the first part of the Cleopatra monologue hardly what the Prix de Rome judges were looking for in 1829 - it breaks up, it modulates restlessly, the aria proper never settles - but the ensuing 12/8 Invocation, vintage Berlioz, is really a preparatory study for Juliet's death (though its inspiration and final shudders are completely different from the tomb scene in the 'dramatic symphony'). 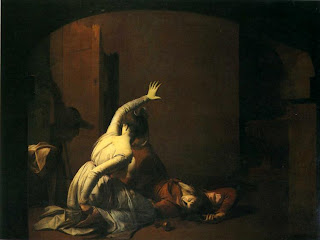 Wrote Berlioz to a friend: 'I wish you could hear the scene where Cleopatra wonders "how her shade will be received by the shades of the Pharaohs entombed in the pyramids". It's awesome, tremendous! It's the scene where Juliet meditates on her entombment in the vault of the Capulets, surrounded alive by the bones of her ancestors and the corpse of Tybalt: the growing dread, the thoughts that culminate in cries of terror, accompanied by cellos and basses plucking the rhythm [which he writes out]. Oh!, Shakespeare, Shakespeare!'

Indeed. And this is another Berlioz inspiration where the music, if not the text, does the Bard justice. Anyway, I'm looking forward hugely to the performance. Better dash now, but if you can't make it, here's the peerless Dame Granite in the second-half Invocation:

Again I envy you the opportunity to see ACA and YN-S do this fascinating piece. And envy the listeners who will have a chance to hear you talk about it. Now I am sitting here pouting!

Sit back, or rather forward, and enjoy DJB (Part One is there on YouTube too, of course). And think how many Prizes poor old Hector struggled for before he got to the city where you are lucky enough to be now...

I think that was one of the first DJB recordings I ever owned. That and a lovely disc of Corelli and Monteverdi. Mind you I ended up owning everything she ever recorded - including that wonderful disc of Scottish Folk Songs arranged by haydn and Beethoven.

David, I'm so sorry I missed your talk! Frantic day, couldn't get out in time. But it was a tremendous concert, Anna Caterina as Cleopatre was a knockout and the star of the evening was - well, Berlioz himself. I'm always left gawping at the thought that he came up with the Witches' Sabbath movement as early as *1830*. As for Cleopatre, there's stuff there that Liszt did decades later.

I was also devastated by the news of Lynne's death, having had no idea she was ill. She will be very sorely missed. You gave her a beautiful tribute.

And sorry I didn't see you there, Jessica. Yes, Berlioz just gets more amazing for me all the time: it's so hard hearing later, more overscoring romantic composers after him. Many of those sounds would be remarkable even if someone came up with them today.

Anyway, I've duly Arts Desked it and will put up something about the bells tomorrow...

As for Lynne, well, I guess we all have to take our time to process that awful news.

Yes, you've described the Berlioz perfectly, since it agrees with mine...and written in 1829 only two years after Beethoven's death with Rossini still working at top speed, Brahms and Schumann still to come and Wagner about 20 years old.

When I think about the contemporaneous lives of the great romantic period composers of the mid-1800s I get dizzy.

Then think of the inventions that were making life more comfortable such as trains, telegraphs: the ability of people and news to move at faster speeds.

A most exiting piece of music.

I know the piece with an older mezzo. A deeper voice. The name escapes me now . Early 80s and orchestre playing more manic!!