The people are the heroes now 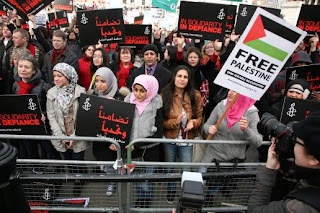 How could old production-rocker Peter Sellars not recall in interview that line of Alice Goodman's breathtakingly poetic libretto for John Adams when Nixon in China was screened worldwide the day after the fall of Mubarak? In fact the Met re-staging of an operatic masterpiece was even more vital for the history and the lessons of revolutions, violent or peaceful. By the way, I wasn't at the talked-up 'premiere of the year', Turnage's Anna Nicole, last night. I'll see it next week, and I expect it to be at the very least extremely well sung, played and staged (by Richard Jones the only genius of the theatre); but on previous form I can't imagine that Turnage, excellent when at his fitful best, hits the heights of Adams, who's given us the only core-repertoire grand opera of the past two decades*.

Nixon's ambiguous, often metaphysical dimensions show us that the euphoria of the moment always yields to a more complex aftermath. After the adrenalin charged 'gambe's/cheers and the salute to Washington's birthday of the big summit dinner between Americans and Chinese that cold February of 1972 (picture by Ken Howard for the Met) 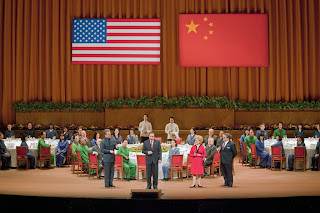 come the private idealism of Pat - still, I think, the greatest soprano scene of the late 20th century, so affectingly done by Janis Kelly - and the reign of terror of Madame Mao. And the last act comes to seem like the opera's greatest achievement in its polyphonic interaction of the five private individuals, wondering 'how much of what we did was good?'

Those questions still resound in Egypt, of course, and resonate for Libya, Iran, Bahrain, the list goes on. What we can continue to do, for the moment, is marvel at the predominance of goodwill, how an educated middle class informed how well motivated were the crowds in Tahrir Square, how amazing that the young took charge and went around tidying up the streets and cleaning the anti-Mubarak slogans off statues once they'd got their way. The pride and optimism are incredible, whatever's still to come. I recommend an excellent programme I just heard on the BBC World Service, covered, as it should be, by a highly articulate Arabic reporter, Magdi Abdelhadi. All this, too, is possible: maybe we need the language-ignorant BBC reporters on the spot for the crisis, but afterwards, why not give the people closest to their people a voice? 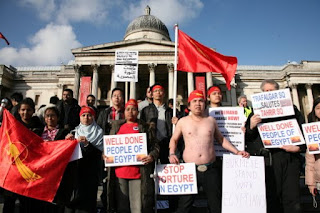 The Trafalgar Square photos come by presumed courtesy of Amnesty UK, who shared them with us its supporters. I asked to use a couple here, but as I still haven't had a reply after three days, I'll take that as a yes and add any further credits if so requested. Anyway, Amnesty and human rights organisations worldwide should be feeling good about all this**. I felt that optimism at the end of last year, which I was amazed to see written off as a quiet one when WikiLeaks, for better and for worse, took charge and students here promised more protests. And much as I resist all pressures to tweet and to go on Facebook, I see their phenomenal influence where it counts, too. Interesting times indeed, and mostly in a good way.

*Not quite incidentally, the best and most detailed essay I've read on Nixon in China is to be found on Daniel Stephen Johnson's blog.

**20/2 As they must be, and I certainly am, reading about one promising volte-face in oppression-threatened Hungary: the Budapest Metropolitan Court's overturning of a police veto on extending a gay rights march in June. I read the articles of the European Union rulings with especial interest, and hope that sort of thing will be enshrined in law in Egypt and other countries soon.
Posted by David at 13:04

I drove down to NYC for the Nixon in China performance that was being telecast live. Friends immediately asked why I would drive 235 miles each way when I could drive 25 to a modern movie theater with HD sound, etc. My reply was and always will be that I refuse to accept mediated audio and video where the sound is mixed and balanced from microphones placed too close to singers whose voices are meant to be heard projecting freely into a large hall. And I want to be able to take in the entire stage and choose the moments on which I want to focus not on what I am forced to look at, mostly by a video director obsessed with close-ups and rarely if ever allows a look at the big picture.

I thought the Sellars production was very good but I did feel that the Boston production of some years ago had an elegance, simplicity and inventiveness in acts 1 and 2 that were superior and quite beautiful. Things like an excited boy running a circle or two around the stage flying a Chinese kite in the form of a passenger jet, then disappearing into the wings as the jet stairs appeared and the Nixons descended to the stage. Or all the open umbrellas of the officials and staff around Pat Nixon coalescing into the profile of a mountain range as if brushed in ink onto a hanging scroll.

Where I thought Sellars to be at his absolute best was act 3 with the haunting image of Cho en-lai and Mao, each in his own bed ruminating on what has occurred as children and officials place memorial flowers around hem and then cover them with the Chinese Flag as a blanket and a lying in state simultaneously. For all the pot-shots taken at NiC here -- it still happens -- the work itself seems to me to have great stature and the audience in attendance received it with enthusiasm.

I'm hoping to see much more of Janis Kelly at the MET -- not only did I find her work superb (am I correct that she's a fine Mozartean?) -- but also because it would be great to have a UK singer in New York of such undeniable artistry that all the usual jingoistic sniping would for once be silenced.

Well, I'd like to see another production of Nixon now. Saw this in Edinburgh, London thrice, Athens and now on screen. It's time to move on. And I do think a clearer staging would benefit Act Three, which production wise I found the least successful. And God only knows how much less so in the barn of the Met.

When it came to thinking about Capriccio, I had opposite thoughts to you - ie why even think of trying to see a piece of that subtlety and nuance at the Met - we had the chance - when the 'mediated' close-ups, even if they weren't what we might want, at least gave the work a chance of coming across as intended. So we changed plans for March/April and will probably see it here. I hope in better circumstances than the not very good Notting Hill screening. The Trittico in Clapham I thought excellent (once we'd got past the problems of German subtitles for Il Tabarro).

Anyway, I'm delighted you appreciated La Kelly's artistry - few on Parterre had the perception or the decency to do so. She is, it's true, getting on a bit for many roles now - I think I would first have seen her getting tangled up in a deckchair as Despina in the deservedly legendary (but otherwise not very well sung) Opera Factory Cosi.

Unfortunately what you're probably due next is seeing her make the most of a compromised, if not entirely uninteresting, hybrid, Rufus's Prima Donna. Isn't that due at NYCO?

We're told that Prima Donna was picked up by NYCO, but something strange has happened this year: City Opera usually has its season announcement ready a couple of weeks at least before the MET. This year, the MET announced the 2011-12 season last week and there isn't a hint yet about NYCO.

They're still pulling themselves together from the big crisis (that's now revealed may have been a bit worse than we knew) but they now have a new Board chair. It's possible next season is still being sorted out. I'm seeing the Monodramas and the new Seance on a Wet Afternoon this spring, looking forward to both enormously. I feel very emotional about City Opera--it's a unique cultural resource that we cannot afford to lose.

OK, I have now read that Janis Kelly studied with Elisabeth Grummer and, given the performance she gave of Pat Nixon's big scene, it all makes perfect sense.