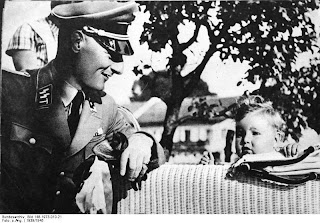 Jonathan Littell's The Kindly Ones, winner of the Prix Goncourt in France where it was first published as Les Bienveillantes, is the most disturbing book I've ever read. A big, important work, certainly, but I'm not sure if I would bandy the words 'great' or 'masterpiece'. Powerful, undoubtedly: I realised from an early stage that it wasn't for bedtime reading, which is why I took to turning the light off on stuff about royal gardens and Baltic islands, and when I recently neared the end, I found myself twice overshooting tube stops in my absorption. 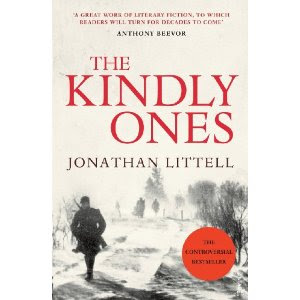 The title is all important: Aeschylus's Eumenides are a presence practically throughout, in their earlier guise as Furies, to Nazi SD officer Aue - more of an Orestes, it's to transpire, than we could possibly imagine in the early stages (can't go further without spoiling the tension inherent in the narrative). He's there at many of the worst atrocities known to the Second World War, from Babi Yar through Stalingrad to the death camps and the fall of Berlin. Which is plausible, as is the violence, and the way it piles up and springs again just when you thought you'd reached a more lyrical stretch (the titles of Bach/French suites to each section - Toccata, Allemandes I & II, Sarabande, Menuet (en Rondeaux, Air), Gigue - are more ironic than apt). 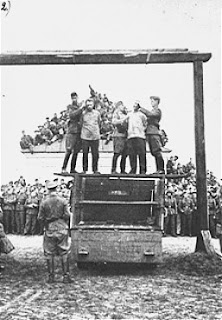 I had two problems throughout. One is the knowledge that Littell Junior (his father, I think it is, writes the most wonderful post-Cold-War thrillers) researched for over a decade. It may well be that the monotonous listing of all the Nazi stratifications is deliberate, for numbing effect; but I was less convinced by the way that characters often speak like dense newspaper articles, as if all the research simply had to be crammed in, just as it seems to be in bad biodramas like Ronald Harwood's. And since the facts are wrong about Richard Strauss, the only area where I can claim any detailed knowledge, how much is dodgy elsewhere (a question I also found myself asking about Orlando Figes's Natasha's Dance)?

Is faction different from true imaginative creation? Jim Crace, after all, is the most evocative writer I know, yet he doggedly disdains research. And when Littell goes in for stream-of-consciousness writing, as in the ghastly Air sequence, I'm not entirely convinced (it may just be the translation, of course). 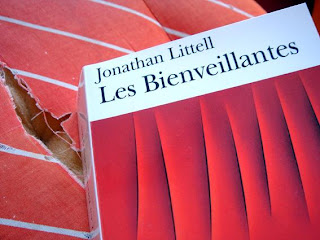 As, indeed, I'm not by what the author wants us to think of the most mixed-up character in literature. Clearly Aue's prefatory statement - 'I am a man like other men, I am a man like you. I tell you I am just like you!' - doth protest too much. Yes, maybe most of us would have been complicit in one way or another in 1930s and 1940s Germany. But not after the manner of this character. The novel might as well be subtitled A Psychopath's Progress, or even Dubious Memoirs of a Fantasist. I'm presuming we must take the later murders as part of that brainsickness, too? Is it a good thing that we're left uncertain? At any rate, having to consider the final pages as even possible truth seems like a step too far. It was all quite bad enough without the extra patina of whimsy.

You can see that I'm confused, and perhaps that's the idea. I didn't once think, yes, I'd have done that, or, yes, I can see how an arts-loving man could behave like that. Because of course at the heart of Aue's narrative is an almost - though, tantalisingly, not quite - total lack of empathy for his fellow man. The voices of conscience surface very briefly in the form of his twin sister and the sad, decent woman who looks after him during one of his breakdowns. But inevitably you wish someone had succeeded in putting a bullet through the protagonist's head long before he could go on to commit still worse crimes of his own. Curiously, there are fabulously evocative descriptions of Lemberg/Lviv/Lvov and Pyatigorsk which made me want to go and see those places, so the book's not without its beauties, Still, it's a case of Schrecklich, aber nicht unglaublich. Ending now on Shalom Goldberg's image of Babi Yar. 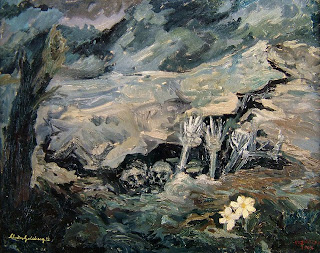 I wonder if Jonathan Littell had come across the fictional memoirs of Colonel Pyatt by Michael Moorcock? This is not SF/Fantasy like most of Moorcock but the implausible history of an emigré from Kiev with an antiques shop in the Portobello Road. Born in 1900 his life tracks the horrors of the 20th Century, including the Russian Revolution, the Holocaust and the Spanish Civil War.

The 4 volumes, Byzantium Endures, The Laughter of Carthage, Jerusalem Commands, The Vengeance of Rome, were published between 1981 and 2006. A good, racy read but rather long, and not up to the standard of Mother London or The Dancers at the End of Time, my favourites.

I was led to read Mother London by an assistant in Blackwell's on the Charing Cross Road.I'd put in an order for a book and he read my address: 'did you know that's what Michael Moorcock calls Sporting Club Square? Mother London's my favourite book of all time'.

With such a recommendation, how could I not succumb? Found it interesting, but didn't do much for me, and now I can't remember any of the details