Portrait of the artist as opportunist 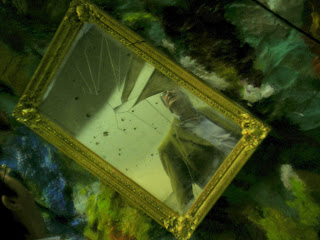 OK, so that's me messing round on the Leeds Grand Theatre stage, as snapped by my Radio 3 interlocutor, the ineffable Christopher Cook. But I'm talking about Chartkov, lonely protagonist of Nikolay Gogol's The Portrait as translated into music by Mieczyslaw Weinberg (aka Moysey Vainberg) in 1980. The opera, clearly, is no straightforward rendering of the short story, in which the portrait of a Satanic old moneylender is absolutely key throughout. That supernatural aspect wasn't much liked by critic Belinsky, whose more prosaic understanding of a central message about artistic compromise is shared by David Pountney in the Opera North production (the four production photos below by Bill Cooper).

In other words, he sees it more or less exclusively about what happens when a painter sells out, only to discover too late what dedication to real art is all about. Which is fine, up to a point. I like Pountney's central conceit, brilliantly supported by the sets and costumes of Dan Potra, that we start in a rainbow-oiled artist's studio in Petersburg c.1830 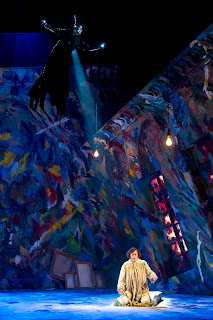 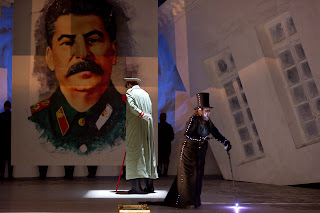 and on to Warhol in New York. 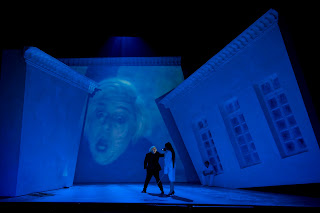 That's fine. But, as has become Pountney's wont in more recent extravaganzas, the message is muddied. What are we supposed to make of the cracked-mirror 'portrait', the fact that the old moneylender with the evil eyes never appears, let alone steps out of his frame, to balance the vision of the artist's psyche muse, a leggy girl in bedshirt and high-heeled red shoes? Plus there are some declining old voices in the ensemble: Helen Field's is unbearable to listen to after a while, and I don't think it was just Peter Savidge's temporary indisposition which made his crucial, Death in Veniceish hymn to the true artist in Act Two so unpleasant to listen to (it's a tough sing, and we got a much better stand-in on Thursday, who sadly won't be heard on the broadcast).

Nevertheless it's tenor Paul Nilon's evening, and while this time he didn't have a character as interesting as Michel in Martinu's Julietta to get his teeth into, he did as good a job as he could to stop us wishing that the great Langridge had got hold of the role twenty or so years earlier. 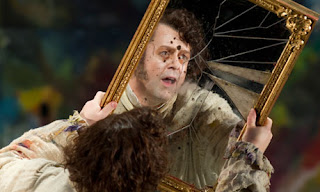 So what of the music? A second hearing, not least because Rossan Gergov got far more impassioned and well-phrased playing out of the Opera North Orchestra than on the previous performance we'd heard, suggested pseudo-profundity in the last act when I'd been led to hope there might be real depths here. But Weinberg still finds inspired touches: the Lamplighter's ever more haunting ballads, in a simple vein that this composer could do so well, the muted violin solo for the evanescent Muse and the symphonic sweep from the A major eulogy in praise of the dedicated artist to Chartkov's panicky peripetaia. It never comes close to the operatic riches I heard once again in Saturday's Met screening of Adams's Nixon in China, so evidently a masterpiece even back in 1988 when I first heard it. But it's stageworthy and interesting. And the more I hear of Weinberg's music, the more I come to respect this composer who lived so much in Shostakovich's shadow after arriving in the Soviet Union from Poland. 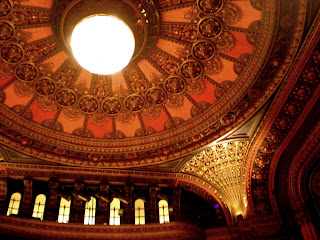 Some of this I managed to say in our boxed conversation as we looked out on the splendours of the beautifully-restored Grand Theatre (above) before and during the show: we'll see what transpires when the Radio 3 broadcast is aired in May. I must say that I had a jolly time as always with CC - seen here framed - 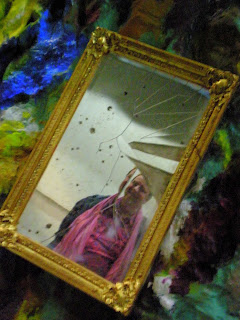 as well as with producer Sam Phillips - who indulged me in a second visit to Hansa's Gujarati vegetarian restaurant, where I did indeed get to meet the great lady as I'd hoped - and the rest of the team. And, yes, I love Leeds now; though it seems unfortunate that Opera North couldn't have done more to fill the many empty seats in the Grand with young folk (I saw none on either visit). This is just the sort of piece that could have fired up many a school project.
Posted by David at 11:27