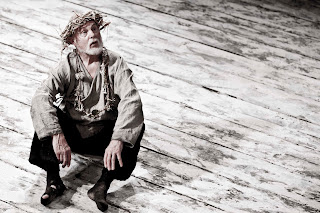 It goes, I think - and I find, to my surprise, that there are folk who think otherwise - to Derek Jacobi for a Donmar King Lear I was so desperate to see that I completely forgot to book for it, had to pass on a matinee ticket offered at the last minute two Thursdays ago (Berlioz Romeo examples were still filling my time and mind - coronation results below) and only just caught in the live screening at the Gate Notting Hill - one of hundreds, I gather, worldwide - a week later. All photos of the Donmar production here by Johan Persson for the company.

The singular circumstances of that event I rather opportunistically captured, hopefully to the greater glory of the actors' professionalism, on The Arts Desk. But I ought to enumerate, if only for my own memory (as if I could forget), the range and breadth of Jacobi's greatest challenge. There was a potent sense of time passing for me, as his Hamlet was the first I saw, aged 15 (with my dear old dad just departed, coincidentally enough, and a tricky stepfather not so far in the future) at the Old Vic in 1977. I knew then, without comparisons to make, that it was the greatest, and so it has always remained in my mind. Forgive the fuzzy image of the programme here - mine is still buried in the maternal attic, I hope. 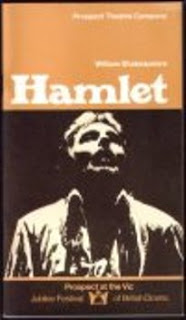 There's one objective truth here - that no living actor I've ever encountered has produced a wider vocal compass or more extreme dynamics (Alex Jennings and William Houston - where on earth is he these days? - came close). That makes for an operatic experience in which the music is all in the voice, and which veers between theatricality and heart-stopping truthfulness. And much as I will always remember Kathryn Hunter's Lear as the best I'd seen on stage up to this one, Jacobi led me to the somewhat sexist conclusion that even an actress can't do so much across the octaves. Because, of course, Jacobi has access to the falsetto too. Which he uses to highlight not only the old-womanish, verging-on-senility of the foolish, fond old man but also the heartbreak of 'O, let me not be mad' (who didn't want to weep at that point, I wonder?) and the banshee terror of 'howl, howl, howl!'

Speeches lit up, as did everything in Grandage's crystal-clear, blinding-white production, like I've never heard before - the quiet desperation of 'O reason not the need', the disarming crescendo of the curse on Goneril, the coup of a whisper after the soundscape storm in 'Blow, winds, and crack your cheeks'. And 'Poor naked wretches, whereso'er you are' was one of many revelatory turning points - perhaps the most crucial, the first point at which true understanding of the lives of others seemed to strike home. The mad scene, which is where our transmission broke up, forcing Paul Jesson's Gloucester and Gwilym Lee's Edgar to repeat their Dover cliff duet with greater intensity, came across with exemplary crispness. 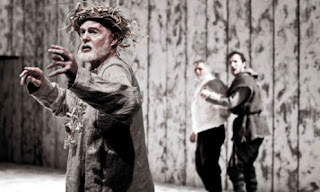 All this would have been less shattering had it not been conducted in tandem with a superb group among the actors, above all Ron Cook's Fool who made every 'riddle' intelligible (just seen him burnt to a cinder in Simon Pegg's surprisingly hilarious cop movie spoof Hot Fuzz). 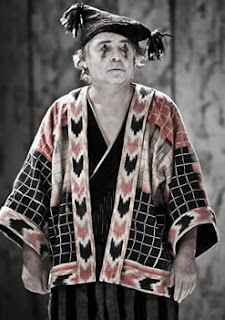 You understood the two elder sisters not so much as ugly by name and nature but as warped daughters of a capricious father, with superb differentiation between Gina McKee's cold 'un Goneril (right) and Justine Mitchell, perhaps the more interesting characterisation, as a Regan with banked hysteria bursting out in terrifying degrees. 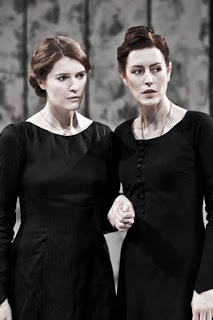 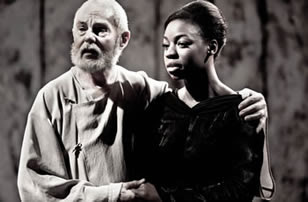 Even the handful of weaker actors never quite let the side down: Grandage's pace and clarity always kept the focus where it was supposed to be. So while I felt his Glyndebourne Billy Budd restricted the possibilities and dimensions of Britten's psychological study, this was surely a liberation for the actors and the limitless possibilities of Shakespeare's text.

So. You may now have heard the Saturday Library choice for Berlioz's Romeo et Juliette - six days left on the BBC iPlayer to listen, if not - unShakespearean in the sung word but never in spirit. The gold crown, one of three, went to Gardiner's comprehensively vivid survey. 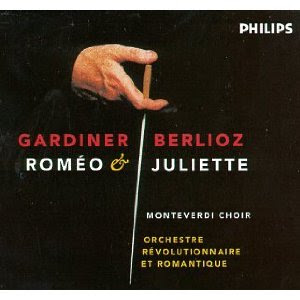 As yet there's a degree of confusion over its download status, but I was assured at the time that there were places on the net where that was possible. Apparently Universal rectifies the situation tomorrow, though this is a case where I'd like to have the CDs with their booklet for clarification of the various alternatives*. Anyway, I still have equal fondness for Sir Colin's first performance, another download-only; it was only the uniform first-class quality of JEG's soloists and Monteverdi Choir which tipped the balance. 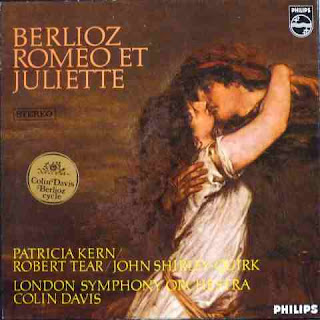 In such programmes, the final choice is the sop to the public; but it's never so clear-cut. Truth to tell, I'd like my Romeo Alone movement from Monteux, the Love Scene from Davis in Vienna and the Mab Scherzo from Boulez (with Munch, so unexpectedly ham-fisted elsewhere, a close second). I also lay claim to my copy of the Toscanini NBC performance, too. Surely never was there a work offering so many different stylistic choices, movement by movement. Every orchestral work I hear after it seems a bit overstuffed at the moment.

*I'm told this is feasible, at the standard price, from ArkivMusic.com.
Posted by David at 17:15

Yes, in my unlearned way I thought JEG made it

I believe that the reason JEG so often wins in the musical stakes is that he takes proper trouble with his choruses.

I know that Passions are very often sung with amateur choirs and that so much uplifting pleasure is therefore given to the singers, but the flabiness I heard in my youth put me off even Bach's. JEG gets the choruses - even the professional ones - even more focussed than other conductors.

I have not seen a female Lear ( who directed Kathryn Hunter ?) but I do not think it will work. Lear is about all old MEN just as Hamlet is about all young men ( or all men). The sexes are not the same and if a particular performance of Lear is seen as one which could possibly be done by a woman then I would argue that that performance is defective

Men and women have a difference in their analytical abilities and in their drive and agressiveness. Their old age can produce characteristics no women could match.

Men are better at bridge than women. One cannot override evolution. Women should make better doctors and - dare I say it - equally good priests, at least in the caring dimensions

KH portrayed Lear as a very old, wizened man, first a rather malignant gnome and later a very frail creature a hairsbreadth from death. Once the play - not at all a good production, by the way, I forget the name of the female director - was underway, I never thought of the King as a she. Ditto her Richard III, and Janet McTeer's Petruchio, an utterly believable, crotch-scratching bloke (and one way of making that play - in which Hunter played Katharina - multi-layered).

It is acting, after all.

OK, if a woman played a man - pretended to be an man - that might work. A woman as Richard II - might have worked. But it would mean ACTING ( I agree) a man

In fact we had an actress playing Richard II too, Fiona Shaw. Less convinced by that one, though she was as usual compelling after her own fashion.