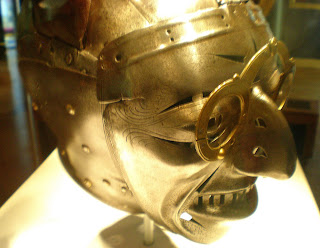 When we last visited the Tower of London, I was a little sad to find that my favourite piece of armour from childhood visits, the grotesque helmet given by the Emperor Maximilian to Henry VIII, had migrated northwards to the new Royal Armouries Museum in Leeds. That was the driving force which propelled me along the River Aire from my hotel the morning after a not too thrilling first acquaintance with David Pountney's Opera North production of Weinberg's The Portrait at the Leeds Grand Theatre (I have to make a return visit for the BBC Radio 3 broadcast, so I'll reserve judgment here until I've seen it again). 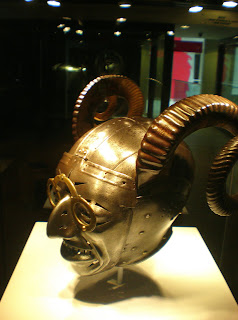 The helmet, as it turns out, is the symbol of the museum, lodged in a fortress-like new building with an imposing entrance and a curious staircase extension housing the 'hall of steel'. 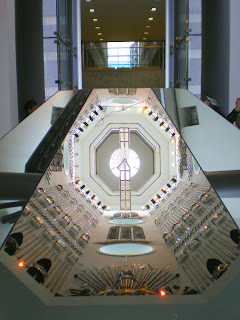 Well, it's all free, so I shouldn't even carp, but in addition to my customary plaint about the dismal shortage of postcards (hence the DIY photos), I found it problematic that the museum is so exclusively geared to interactivity and kids as to exclude the kind of aesthetic pleasure you can still get walking through what's left of the Tower and in the handsome royal armouries of Les Invalides. A moan you might find as odd as my new-found interest in the beauties of armour. That I think I can justify by the analogy with churches and cathedrals: similarly built as expressions of power, but crafted by masters and artists whose genius outlives the original purpose. The grotesque mask, in any case, seems to have been decorative tournament armour. 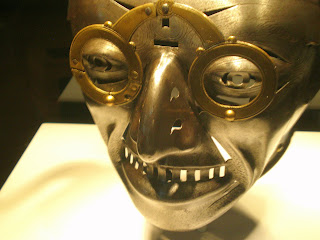 I found an interesting discussion on this which told me that 'tourneys where masks were used were called "Husaria" and were introduced from Hungary, where many Polovtsy clans had fled from the Mongols.' Another suggestion is that 'this helmet looks more like a grotesque iron "mask of shame", made in the 17th century in some German towns [and featuring] hooked nose, horns and glasses...maybe today we are not fully able to appreciate the Emperor's practical joke?' 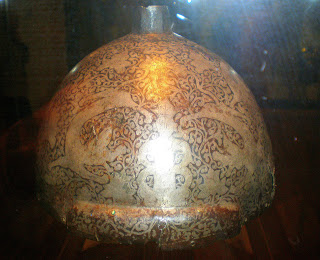 and while I can't get enthused about Japanese samurai getup, I did spend most of the time on the oriental armour floor. The Armouries' other great treasure, I reckon, is the Mughal elephant armour from the late 17th or early 18th centuries, a gift from Lady Clive in 1800 which ended up in Powis Castle. 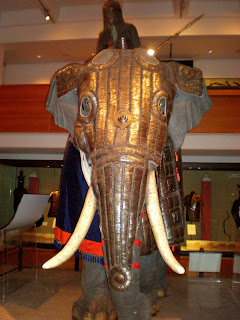 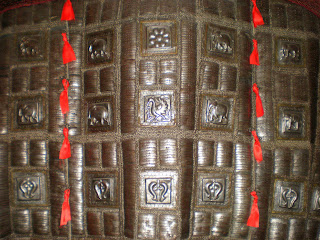 In the same room, I couldn't resist snapping a couple of powder flasks - one late 18th century Rajasthani with a dragon's head 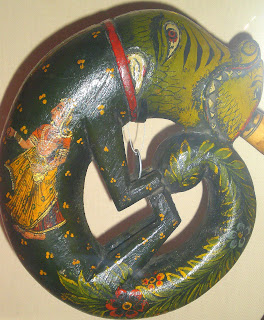 the other from Lahore incorporating a nautilus shell. 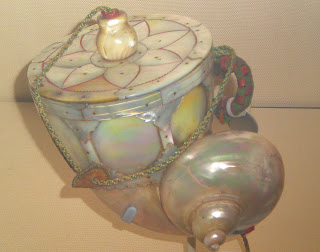 And here's the Florentine equivalent a specimen from 1565 possibly made for the Medicis. 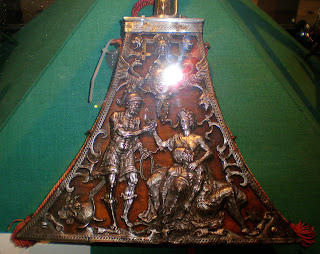 I must say Leeds began to open up its well-concealed treasures this time. In addition to the new developments and old warehouses along river and canal 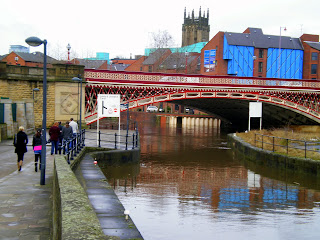 there were a few things to see in the early 19th century parish church of St Peter (quite a fine tower, that, for the 1830s), including the Hardwick memorial of 1577 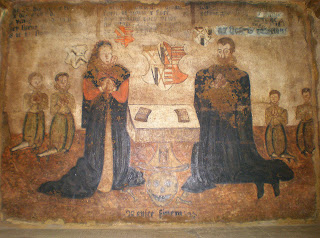 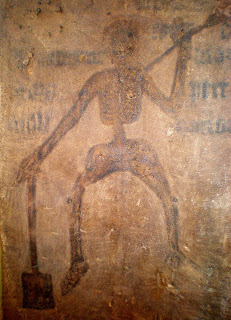 and a tenth century cross which the Victorian architect had the nerve to appropriate for his own back garden down south, only for it to be reclaimed after his death. 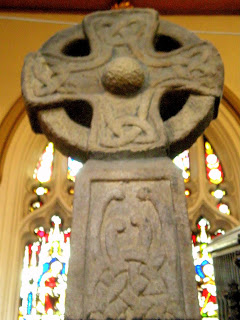 And now I know two good eateries in Leeds: the splendidly muralled Safran Persian restaurant just under the railway arch on Kirkgate - ah, memories of Persepolis - 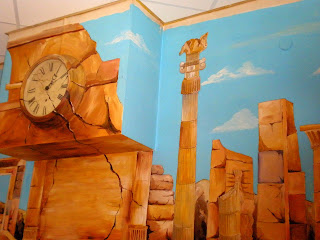 and Hansa's Gujarati vegetarian restaurant at 72/4 North Street, just up from the theatre (thanks to Graham Rickson for introducing me to that). Looking forward to more dhosas on the return visit, and hoping this time to catch a glimpse of the famous Hansa: Asian Business Woman of the Year 2003, 25 years in the business and still running the same establishment.
Posted by David at 21:21

I seriously think old Max was having Henry on!

As soon as I saw this I was sure it was meant to be Igor Stravinsky. But then I saw the horns and immediately thought of the devil mask worn by Terry Bozzio in Frank Zappa's take on the Soldier's Tale.

Zappa was hugely influenced by Stravinsky as well as Varese, and Titties'n'Beer is his story of the hell's angel who does a deal with the devil to get back his girlfriend and his beer after the devil eats them. Well, Zappa was never one to be inoffensive whenever possible!

I'm so glad to hear the good news on your biking injury. Have you been able to put it behind you now and get back to cycling with confidence? I hope so.

Extraordinary! I've got the Boulez Zappa LP, though to tell you the truth I don't hear too much Stravinsky in that clip...it's a total one-off. Zappa sure has sex appeal.

And yes, thanks, Howard, I'm back on my bike wearing the horrid (non horned) helmet that makes my head sweat and will take some of the pleasure out of summer cycling. But better that than dead, I guess.

What an interesting blog, introduced by a thought-provoking photo. The unusual wall painting of the dwellings is also a strangely modern interpretation. Something like this hieroglyphic view of a park by Swiss painter Paul Klee, http://EN.WahooArt.com/A55A04/w.nsf/OPRA/BRUE-8LT475.
The image can be seen at wahooart.com who can supply you with a canvas print of it.