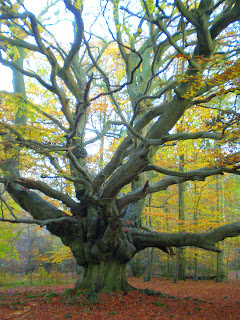 It's been quite a week for soul-food even outside the musical sphere: Durham, Rome (more anon) - and, by no means least on the list, the Chilterns. I've been wanting to go and gawp at some of the biggest, most awe-inspiring trees in the country since reading Richard Mabey's Beechcombings, but a succession of dull or busy Saturdays got in the way. Then, after it had seemed, as Eliot put it in Murder in the Cathedral, as if golden October had well and truly declined into sombre November, we had a patch of brilliant late-autumnal weather. And so, perhaps a bit late after Saturday lunch, we took a half-hour train journey from Euston, got out at suburban Berkhamsted and, armed with Ordnance Survey Explorer Map, headed for Frithsden Beeches.

We were there to enjoy the beauty of Berkhamsted Common on the Chiltern ridge, one of those free-for-all stretches of land which miraculously escaped enclosure over the centuries, and rather more specifically to search for a gigantic tree that rather paradoxically is a needle in a forested haystack, one I'd expected to be signposted, especially after its transient spell of fame in one of the Harry Potter films. It isn't, praise be, but we certainly happened to be in the right vicinity when I asked one man and his dog the whereabouts of the Queen Beech. 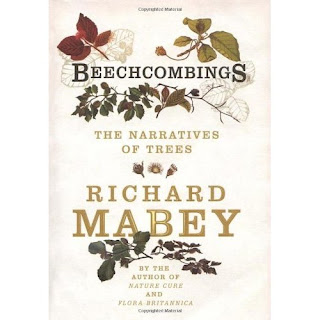 I can't do better than Mabey in his page two description of this 'antic and indomitable matriarch':

It seems elephantine, an impossible mass for a living thing. It is, I guess, between 350 and 400 years old: two centuries of being repeatedly beheaded for firewood, two more as a picturesque monument. It grew up in the open, unrestricted by other trees, and its long low branches trail out like the arms of a giant squid. Its trunk is vegetable hide, a mass of burrs, bosses, wounds, flutings, fields of scar tissues congealed around the points where the branches were lopped. 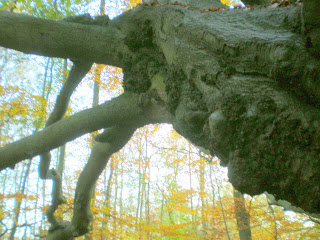 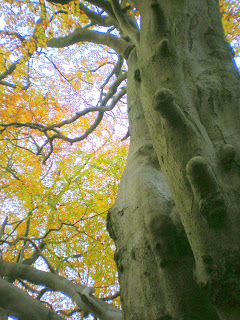 There's more - about what lives within and on it, about the extraordinary attempts by forestry professionals at a misguided recent era in tree history to fell this 'insult to the forester's craft', this health hazard and nuisance; an 'epic local uprising' saw that one off.

Now, unlike then, there are no notices other than footpath or bridleway signs - and since there are so many options, it's hard to know which way to turn. We came straight out of the north side of Berkhamsted Station, walked past the ruined castle 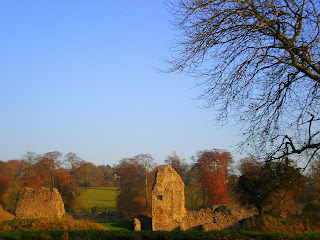 and headed to the ridge past a farm, fields of horses and the odd lovely oak 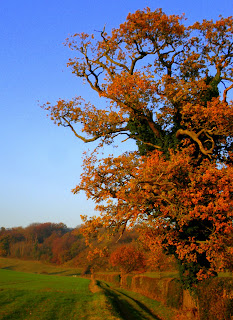 towards the south entrance of the wood 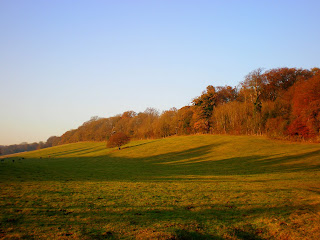 which was still glowing in the late afternoon sun 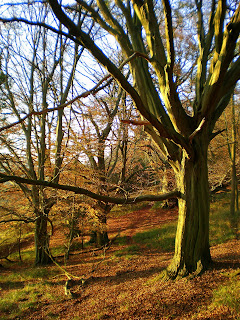 and rich in mushrooms. 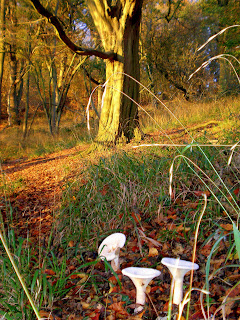 Yet once we headed towards what we were explicitly seeking, Frithsden Beeches, rather loosely marked on the map, the sun barely snuck through the high treetops. There was one splendid glade of beeches to the right of the path, with clear signs of nature's gnarled reaction to all that coppicing 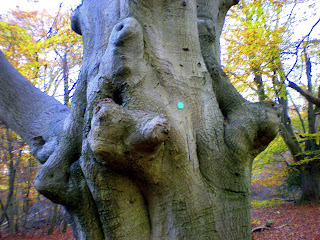 and J thought due north was the solution 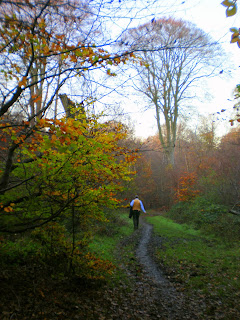 until the man and his dog put us right and led us to the spot. Nearby, slightly less pachydermal sisters of the Queen like this one 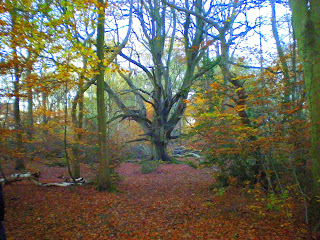 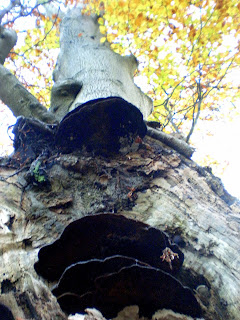 but Her Majesty was indeed the one to stop and wonder at, for a good half-hour. 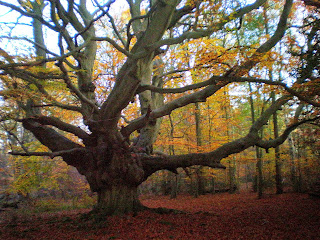 Could nature and necessity between them, not art, really have created this? Even her mossy roots against the bed of shed leaves are impressive. 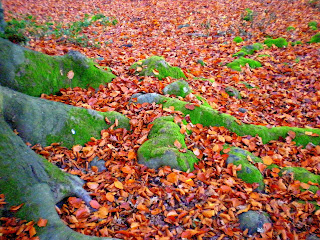 The sun was quickly setting, so we proceeded some distance along the Hertfordshire Way on the ridge before doing the circuit back via Northchurch 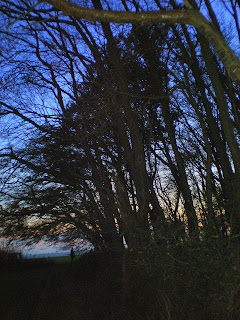 the last bit in a very magical, damply autumnal dark. But here's another resource on London's doorstep which we really ought to discover much more. For easy-access country walks we've always headed to my old stamping-ground of Surrey, or the Sussex Downs; but the Chilterns are no less unique.
Posted by David at 12:11

That's one impressive, if slightly scary, tree. No wonder Richard Mabey made a big thing of it.

Oddly, Robert, it doesn't feel at all scary close up, rather comforting. Though in a gale, I wonder...especially as the locals once had to put up a notice warning walkers-under to take care of falling branches. I marvel that health and safety have left it alone, and unidentified, now.

Wonderful photos David, who would want to be anywhere other than England in autumn? I grew up in Bookham in Surrey which is called a "village by beeches" in the Domesday Book and there are many magnificent trees up on the Downs, although none like this one. I wonder if the "Berkham" of Berkhamstead has the same meaning. We have friends there and have sometimes gone to walk among the bluebells in Ashridge woods.

But music is ever present and two multi-instrumentalist composer/producers both have studios in Berkhamstead, Steve Wilson and Jakko Jakszyk.

Such a beautiful place, and what a fine old tree! Your photographs capture so well that wonderful late-day light, the ruin lit up as only nature's light can do. (I'll have to confess, though, on reading the comment from Howard Lane, that, while England is grand anytime, with all those superb rights of way like nowhere else, I have been wont to say, who would want to be anywhere else but the Hudson Valley in autumn?)

Yes, I suspect Hudson and New England autumns, if the photocolours tell true, have to outstrip what we get here. And of course we never had the benefit of your autumn-leaves-through-snow winning shot.

As for the rights of way and the veins of public footpaths that spread throughout the country, have you read American academic Rebecca Solnit's Wanderlust? Contrasts our democratic roam-where-you-will with America's don't-walk-except-in-national-parks mentality. Mind you, farmers and celebrities sometimes do their best to obstruct our footpaths.

Update for Howard: I was waiting to dig out my obstinately concealed 'English Place Names' before replying, but a quick wikisearch reveals that 'Berkhamstead' means the homestead among the hills (berk = berg). But dubious etymology makes a nice case for linking 'beech' and 'book' because the first European inscriptions were on beech bark. And 'Buckinghamshire'may either be the country of the 'buchs' - or just of Bucca's people.

We no doubt have to thank the Welsh for creating the “Harry Potter”tree, at Frithsden Beeches in the Chilterns. (SP99681034).
Whereas traditionally pollarded trees are cut above head-height to prevent new growth from being eaten by deer or cattle, this was cut low down as a “stub”. Traditionally the new growth which developed into leafy branches was cut down every few years as fodder for the commoners' cattle, or cut for firewood, or used in furniture making.
The 1870 Ordnance survey map shows this tree growing on the open common, not in the forest.
The adjacent track-way was a major drovers' route into London for hundreds of years, and this location was no doubt a customary stopping point for the drovers and their cattle.
The Welsh drovers planted Scots pine trees as way-mark signs along their routes, and they no doubt cut existing trees as route markers. The contorted shape of the “Harry Potter” beech has been brought about by constant pruning of the crown encouraging side growth. It was last cut in the mid 1800's by which time the Welsh drovers had become redundant and since then the new growth has developed into large branches.
The tree featured in the fourth Harry Potter film “Goblets of Fire”.
There are other examples of pollarded “stubs” on drovers' routes in the Chilterns. Regards John Trimmer see www.llundainfach.co.uk

Thanks for taking the trouble with all this fascinating intelligence, John (a rather late acknowledgment, but a grateful one nevertheless).

We are sad to report that this amazing tree has fallen this week due to old age and funghi decay. We are looking at how to celebrate it, do send any ideas or stories about the tree to us at ashridge@nationaltrust.org.uk http://www.nationaltrust.org.uk/ashridge-estate/visitor-information/

Sad but natural, I guess. Thanks so much for letting me know, Kirsten, and do feel free to use this entry and its pictures in any way you see fit.

In the meantime, I should note that I wanted to visit the tree again on a January walk along Ashridge, but it was dark by the time we reached Frithsden Beeches. And a young friend who knows his trees asked me to accompany him on a walk to see the Queen Beech the week after next. Maybe we can just pay our respects to the giant in state.

Do keep me posted about any celebrations planned.