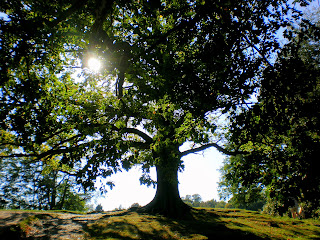 ...this, the oak in autumn (except that heat- and light-wise it could have been a high-summer Sunday on Hampstead Heath)? Well, there was never any competition: I've done my galley years with Boulez and though his conducting of Ravel's complete Daphnis and Chloe with his British chums the BBC Symphony Orchestra a couple of years ago was a truly great performance, I think I've squeezed what juice there is out of his own music. So even one of the seven concerts over the weekend, since I wasn't duty bound to cover them (Igor has done a splendid job over on The Arts Desk), was not an option.

On the other hand I'm so glad a friend of ours, who shall remain anonymous for reasons TBA, decided to hold a small 50th birthday picnic in Kenwood on Sunday afternoon. The Indian summer which has been gracing us until today held out, we lost the route as usual on the way from Hampstead tube and found ourselves - which I was perfectly happy about, since I knew roughly the direction - in a glade of oak so profuse that acorns were plopping not just all around us but on my very head. 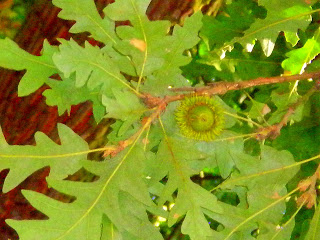 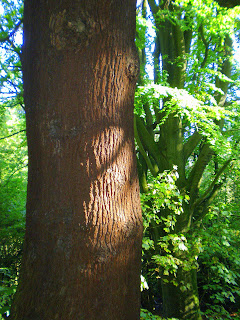 This place still amazes me, above all on such a day when the shade was both magical and welcoming. What a mixture of luck and perseverance that, as Richard Mabey tells us in The Unofficial Countryside, Sir Thomas Maryon Wilson faded in his attempts at development and enclosure in the early 19th century. A writer in Household Words, probably Dickens, laid an appropriate curse on the would-be encloser:

May his dreams be redolent of Smithfield, may nightmare tread with donkey hoofs on his chest, and may visions of angry laundresses [whom Sir Thomas tried to charge for spreading out their washing to dry on the heath] scald his brain with weak tea!

The dastardly capitalist did not prevail, and after his death, writes Mabey, 'the Metropolitan Board of Works were able to purchase the Manorial rights of the heath'. The 1871 Hampstead Heath Act resisted park-prettification, 'its natural aspect and state being as far as may be preserved'. 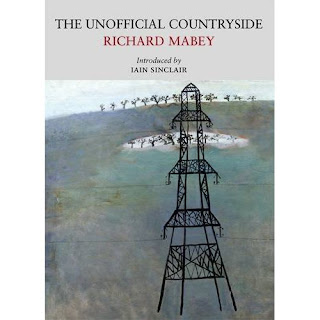 And it has been, to Mabey's and our delight. Mixed blessings followed: at the end of the 19th century the London County Council both tidied and tree-planted, so it seems that we may in part have this anti-natural organisation to thank for some of the shady groves. Even against this there was a swiftish reaction from the newly-formed Hampstead Heath Protection Society. The great pleasure of the northern zone is how you come out of the shadows into meadows, how you leave behind the crowds and then find them again all enjoying peaceful picnics in the sun. There's something incredibly moving about the ease and co-operation of so many people and dogs out relishing the fair weather and the public space, a kind of democratic ideal. 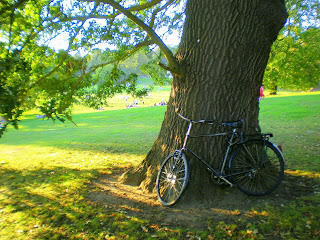 As we did, under a big oak near the house with its fabulous collection of paintings (courtesy of the Iveagh Bequest, may it always remain free to all). I should hasten to point out that the two cyclists below were a) nothing to do with us and b) disembarked just after striking the lawn. 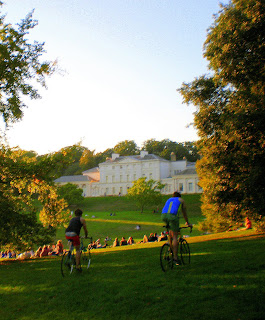 Our consumption and chat, including more quality time with our lovely goddaughters, was decidedly leisurely, though there was - as in all good gatherings - a nodal point as our host donned a former girlfriend's bathing top, skirt and hat and went off to brave the women's pond. We stayed put, expecting some kind of sparagmos a la Bacchae, hairy limbs floating in the pond, but in fact all that happened were some incredulous mutterings in the queue and a bit of half-hearted stirring from two attendants. Whether the experience of being 'a lady' marks a whole new adventure in our host's more-than-midway journey I couldn't possibly say. But we all left happy and sunkissed. 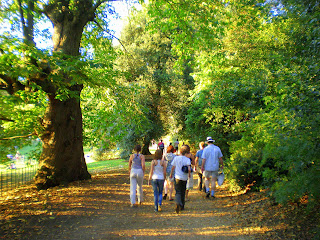 Sad to read of the death of composer/arranger David Bedford, who also had some conflict with Pierre Boulez:

"On occasion, kazoos and metronomes were deployed; in With 100 Kazoos (1971), for 11 players, the instruction to interpret some pictures included in the score, ranging from star maps to illustrations suitable for children's books, brought the composer into conflict with Pierre Boulez, the intended conductor of the work's premiere, and it had to await direction by someone better able to identify with the composer's sense of humour." http://www.guardian.co.uk/music/2011/oct/04/david-bedford

His work with Roy Harper was particularly outstanding, as well as with Kevin Ayres and Mike Oldfield.

Along with the death of Bert Jansch it's a sombre week for British music.

I haven't found much to like in Boulez' own work, although I greatly respect his reputation as a conductor and champion of electronic and contemporary music, including probably the finest performances of Frank Zappa's orchestral work.

Sorry to hear that about David Bedford. Nice guy, and did some great stuff, though I hope I don't irreverently besmirch the memory with a Spitalfields premiere which was beyond bad but which, in the light of The Passenger, might serve as a warning to taking the subject of the holocaust a bit too lightly: his Touristen Dachau, starring Jane Manning. Rather liked his wind pieces, though.

Did you know that there is a competition for the design of a more environmentally friendly electric pylon? I heard ( maybe gossip) that there have been over 200 entries

Talk about peripheral from the two of you's! I suppose 'Kenwood on 2 October looks so beautiful, glad you had a lovely day' is too banal a comment to make. But, no I didn't know that, and what a good idea.

Oh, all right, I'll go ahead and wheel in here with a couple nonsequiturs: I remember my one and only visit to Hampstead Heath, that sense of natural expanse right in London, so remarkable to me at the time. As for keeping open cityspace, I'm put in mind of Marshall Fields, the midwestern department store magnate. He, unlike Sir Wilson, made it his great fight to keep the Chicago waterfront from being developed. (He even objected to the Art Institute's presence there.) As a result, I grew up near the most magical waterfront, which at the time I took for granted, only realizing later, on coming to NYC, what a gift he gave in fighting off all the developers.

As for Boulez, I haven't felt a strong need to explore his work more than the barest bit, with all else that is so much more compelling to me. John Adams put it well, I thought:

"Boulez's music, for all its technical sophistication, never ventures outside a narrow bandwidth of emotion. It lacks warmth, humour, boldness and the peril of emotional risk-taking that characterises great art. Historically I believe he'll be seen as a mannerist, a niche composer, a master who worked with a very small hammer."

Not at all, Sue, you actually mentioned Hampstead Heath and found exactly the right source re a quote on Boulez. 'Hallelujah Junction' remains my bible of common sense on the musical upheavals (or bogs) of the 20th century, which is probably only because I agree with JA on just about everything.

I may enshrine Stephen J's witness to a Q&A with Boulez, which apparently made it into Alex Ross's 'The Rest is Noise', here, as he sent it to me:

'A woman...in the audience asked why virtually none of the music produced by the Darmstadt and associated total serialists had gained even a toe-hold on the repertoire - I think she added something admirably simple like, "Why haven't people taken to it?"

'Boulez replied very equably, in his nicest Oncle Pierre tones: "Well, perhaps we did not take into account sufficiently the way music is perceived by the listener" '.

I am frequently seething with envy over both the quality of your photography and of the locations you visit. (I managed to lop off Claire's head from the nose up in recent pics of Rowan's birthday tea). I'm delighted at the enjoyment your travels provide and greatly impressed by your wonderful images. Please take it as read if I don't always say so.

Rowan's steel band have recorded 3 pieces by Neil Luck for Radio 3. I'll let you know the broadcast date. He's a fan of Ives and Cage but hopefully has taken due consideration for his audience's musical perceptions...

Of course, Howard, I hope my own tone came over as joshing rather than petulant - one never can tell over the e-waves. And I appreciate it's not very exciting just to say 'great pics!' - always better to have something enlightening to say (and you always do).

Didn't know Rowan played in a steel band - another string to the family's multitalented bow...

Must come back to say, yes, that quote, which I remember so well from Ross's book, definitely deserves to be enshrined. Here's another in Ross's book: "Years later, in conversation with Joan Peyser, he casually dismissed his early ventures in total serialism, saying that Structures 1a had been not ‘Total but Totalitarian.’ He also brushed away the formerly dire necessity of the twelve-note composition. ‘I’ve often found the obligation to use all twelve tones to be unbearable,’ he said in 1999.” There’s also a Youtube video of Pierre Boulez (embedded in the post over at Raining Acorns: Slouching Toward Lachenmann: Who Cares If I Listen?), in which Boulez says: "So we forced discipline to absurdity, which in turn brought back the return of chance. Curiously, we realized that extreme discipline and total chance produce more or less the same effect, which was rather strange, not disappointing, but interesting to see the limits, and to see that, beyond certain limits, you fall into the same indifference."