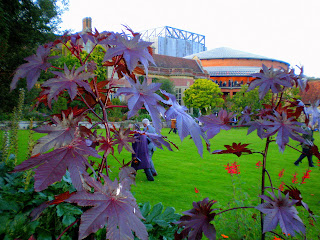 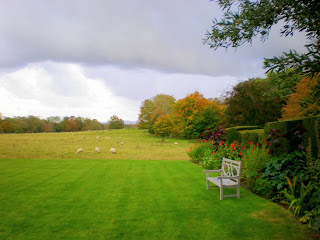 Two visits on two very different days, to talk before the GOT (Glyndebourne on Tour) performances about two operas a little outside my comfort zone. It did me good to find more in Donizetti's score for Don Pasquale than had ever properly met my not especially attentive ear - especially when that was borne out by Enrique Mazzola's crisp, elegant conducting - and to try and find out what makes Rinaldo, Handel's first Italian opera for London, truly tick. As it does in Robert Carsen's clean, clear and often very funny production, though several folk who'd been to the talk expected me to go along with them in the intervals that the show was 'very silly'. And, of course, I disagreed.

Except, of course, that the operatic rehashing of a romantic slice from Tasso's Gerusalemme Liberata is silly in the first place, and Carsen is spot-on: this is schoolboy crusader 'history', so to have it as one unfortunate pupil's fantasy works well. Especially given the director's painterly eye, his refusal to fall into the trap of chucking in too much business to fill up the da capo arias and not to trust the singers, the minimum of gags very well choreographed by Carsen's regular collaborator Philippe Giraudeau.

The reviews seem to have taken it all a bit too seriously, and not to have realised that any links with David Alden's gobsmacking ENO schoolyard production of Britten's A Midsummer Night's Dream were purely coincidental (both were being worked on simultaneously). 'Crusaders' on bikes to give energy to the Act 1 bravura curtain, 'Venti, turbini' - now there's genius, especially as it looked rather lovely under a full moon and since counter-tenor Christophe Dumaux is good but not Iestyn-Davies-electrifying in show-off mode (Rinaldo production photos by Alastair Muir). 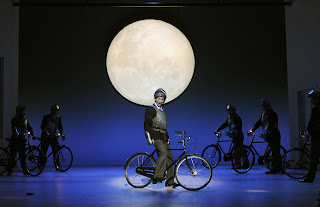 Loved the sirens all mincing impersonations of schoolgirl Almirena, the 'siege' of Armida's castle in a chemistry lab, the elaborately timed soccer-match battle with a globe as the ball. Laurence Cummings kept a superb orchestra moving and shapely, not always with enough space for everyone on stage to maneouvre. All the singers did a good job, but the really outstanding ones - though Isabel, my companion for the evening, smitten by Dumaux, will disagree - were Joshua Hopkins's Argante (such a tough sing, but handled with confidence and nicely decked out in his splendid if nonsensical entrance aria by three of the opera's four trumpets) and Elizabeth Watts's Almirena. 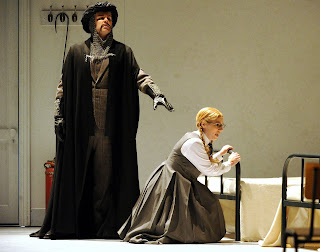 I'd prepared the punters for various takes on 'Lascia ch'io pianga', from 'classical Barbra' Streisand (which several seemed to know before I cut her mercifully short) to Cotrubas and Bartoli, with an interesting detour via the aria in the second of its two earlier homes, as 'Lascia la spina' in the 1707 cantata Il trionfo del Tempo e del Disinganno, very stylishly da capo'd by Ann Hallenberg. But la Watts surpassed them all, I reckon, in her thoughtful ornamentation. We also had a bit of a laugh in the talk with Horne and Podles in 'Venti, turbini', and I found myself being irreverent about the whole set-up - without, of course, having seen the Glyndebourne production in the main season, as had many in the audience, which is healthily irreverent, too, but not insensitive or without its moments of pathos.

The history of the Queen's Theatre Haymarket premiere 300 years ago is, in any case, absorbing in itself and could well have filled up the half-hour pre-performance talk with anecdotes from Addison and Steele. I perceived a certain irony, though I may be wrong, in Steele's observation of the castrato playing Rinaldo in 1711, Niccolo Grimaldi detto il Nicolini: 'every limb an every finger contibutes to the part, inasmuch that a deaf man may go along with him in the sense of it. There is scarcely a beautiful posture in an old statue that he does not plant himself in, as the different circumstances of the story give occasion for it'. Well, autre temps, autres moeurs, I guess. We think this is Nicolini in Marco Ricci's Rehearsal for an Opera of 1709. 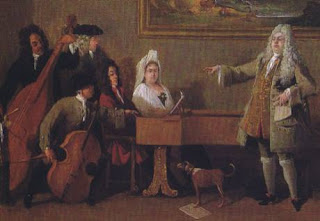 Don Pasquale's creation at Paris's Theatre Italien in 1843 is no less interesting, given that three of the four main singers had created a furore in Bellini's I Puritani eight years earlier. You can well imagine the self-regarding Tamburini 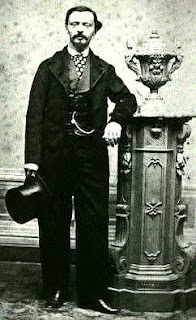 being miffed that the supposed cabaletta to his first cavatina went to the buffo, Lablache, pictured below with Giulia Grisi in Puritani 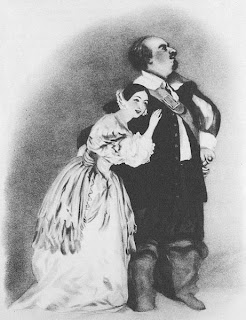 and I'd love to have seen what Grisi made of Norina-as-Sofronia's celebrated persecution and slapping of her old 'husband'. There was fun enough in the spat between Ainhoa Garmendia (good, bit soubrettish) and Jonathan Veira, all you could want in a not overdone, relaxed and easy-going Pasquale (great photo by Bill Cooper). 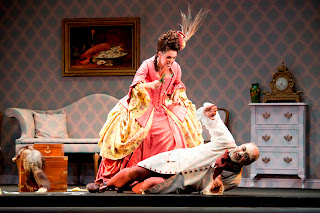 No need to regurgitate what I've written about the show over on the Arts Desk, so let's just wind back to a sandwich by the lake on a glorious autumn afternoon just before I went off for the soundcheck, the beech trunk more visible now that the thickets by the lake have mostly moulted 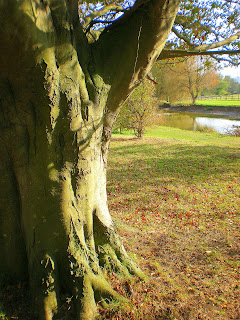 and apples in the orchard glowing red in the sun 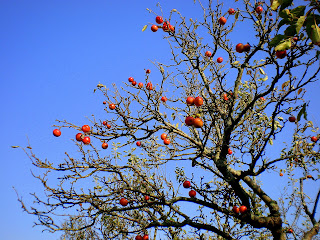 while the view from the Ebert Room seemed much as it had been back in August. 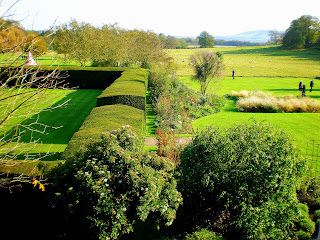 Yesterday was blustery and - eventually - wet, even if the herbaceous border that looks out over the big lawn running down to the ha-ha is still surprisingly well flowered. 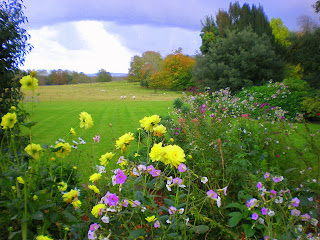 It did, though, feel like the equivalent of a seaside resort out of season that we had to stand and eat our sandwiches on one of the covered levels in the second interval. But both shows were well up to Glyndebourne-in-high-summer standard.
Posted by David at 13:10

As regards the show being "very silly" one might recall Voltaire's remarks that "What is too stupid to be said must be sung". And I would add that great works of art are about life and death and love and hope, and in opera not about the story which is often unrealistic and merely the skeleton on which the meaningful flesh of the work of art is hung. This argues against sur-titles, and certainly, if the singing is in English, this enables enough of the skeleton to be understood.

The reference to the Ebert Room reminds us of what some call "Hitler's Gift" - those driven out by the Nazis ( plus those who left of their own will), the men and women who gave so much to this country and America. At Glyndebourne we gained Ebert and Fritz Busch, and (often overlooked) Otto Loeb who brought beautiful wines from the Mosel to Glyndebourne and to Britain

Quite right, Sir David, and I have to say that the Dean/Merrill Knapp 'Handel's Operas 1704-1726' you passed on some time ago came in hugely useful; it even has a table of exactly where every jot and tittle of Rinaldo - very little of it brand new - comes from. So mille grazie.

I'm out of my depth here, but can at the least join in to say, it's always a good thing to cut "classical Barbra" short. (While it's true that I once made it a point to own every single LP of hers--and am even sorry (sometimes) that I gave them all away--I am glad I stopped listening before she started up with this sort of thing.)

Much as I love Babs in certain things, I once made the mistake of buying the diplo-mate for his birthday a really obvious double whammy of 'essential Barbra' and Judy at Carnegie Hall, and though I know they're chalk and cheese, this Divina did somewhat cast the semi-Stupenda in the shade.

There is - but since this one also dealt with the drastic 1731 revision, all Rinaldo bases were helpfully covered.

Aw shucks, and I have nae chance of seeing GoT's Rinaldo.
I fell in love with the opera when I saw the RSAMD production a few years ago - the great thing about RSAMD productions being that the cast are usually the same age as the characters they are portraying.
The production had lots of visual jokes, including 'the arrival of the weapons of mass destruction' in the form of the front end of a very American-looking aircraft. I'm smiling right now at the memory.

Yes, I reckon the Handel revival has served the music colleges very well - no danger of destroying young voices, and they usually handle the agility pretty well. Most of this cast were young, too. Rinaldo could hardly have looked more schoolboyish (but then counter-tenors have a pretty short shelf-life, don't they, unless they survive by dint of sheer charisma, like James Bowman).