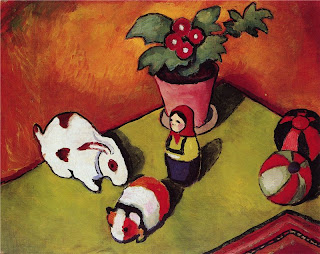 I've never read a more entertaining, laugh-out-loud 'history' book than Simon Winder's Germania. Who could not but agree with him that most of the potentates who've called the shots throughout the centuries are nothing more than a bunch of demented sociopaths (he is generous with the exceptions)? It could all have been a bit brittle and wearing, this stance, were it not for the author's likeable personality and his willingness to stick his neck out for what he loves and cares about. 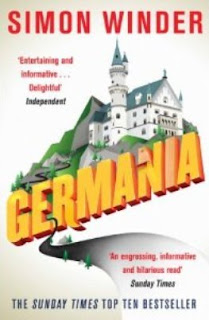 Which amounts to the civic by-products of all this instability: the handsome works of art commissioned by the worst people, the way that anything lovable has a way of squeezing itself in between the lines of horrible history. To sum up 'the pleasure and vigour of the pre-1914 world', Winder chooses his favourite painting, August Macke's Walterchens Spielsachen (Little Walter's Playthings) in Frankfurt's Städel Museum. I hadn't seen it, so I had to look it up and illustrate above. Having described it well in words, Winder sums up:

There are thousands of grander, more brilliant pictures in the world, but I'd settle for Little Walter's Playthings, not least for its revolutionary role in making guinea pigs an acceptable subject for portraiture. Macke spent his entire, short life creating paintings of happiness - shops, souks, parks, parrots, beautiful hats, all in the most surprising and lovely colours. He was killed in Champagne a few weeks into the war, which of course is where the problem begins. 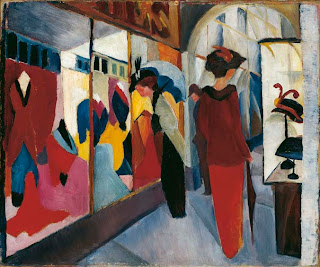 Not that it hadn't begun again and again before in what we now call German history. As for after, when it comes to 1933, Winder declares that 'anecdotal facetiousness has to get out of the way and simply stop'. So he does, justifying as his cut-off point the fact that all the people who made Germany such a rich and rare place to be either emigrated or were murdered. Yet I wish he'd write another book on the continuing paradoxes of post-1945 'Germania', which of course he includes tangentially via his own multiple visits.

Those are what make such seemingly unbearable earlier grimnesses such as the Thirty Years War so bracing to read about. Winder meditates on the stuffed horse of Sweden's Gustavus Adolphus he's seen in Ingolstadt's city museum. Via an hilarious meditation on the usual experience of such civic institutions, he gives us the background and tells us how Gustavus narrowly escaped death in Ingolstadt when his horse was shot from under him before finally meeting it at Lützen. Here's the aside which especially flavours the anecdote: 'This sort of lucky escape is such a common cliché of history books that it is tempting to think of a parallel version which would privilege the horse: so that later, at the Battle of Lützen, "the horse's rider was shot from over him" would be a happy and much-whinnied at outcome'.

The first of Winder's three little chapters on the Thirty Years War made me look at images of more pictures, this time by an artist I'd never heard of steeped in the horrors of that time, Sebastian Vrancx. Alas, his execution is generally less accomplished and creepy than Winder's narrative of these 'highly disturbing images of powerlessness'. But I did find one which seemed sufficiently strange and right, of monkeys and cats in military uniform. 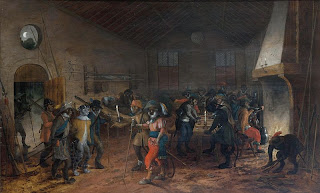 I could go on citing the pleasures of Germania, the many books I have to read and places I need to see which Winder has so enthusiastically recommended. But I'll stop by giving his final inimitable turns of phrase to a theory which Tolstoy put more cumbersomely in his diaries. The context is praise of the Biedermeier generation, 'the first timid attempt at bourgeois civil society, a sort of limbering up for us all now just sitting in a happy pile watching television', and praise for the 'time of quiet consolidation':

Just as most Europeans after the Second World War were, if given the chance, just sitting around in family groups and buying consumer goods, so the new rulers were able to preside over a generally rather dozy population. Indeed, a parallel history of Europe could be written which viewed family life and regular work as the essential Continental motor of civilization. Then war and revolution would need to be seen by historians as startling, sick departures from that norm of a kind that require serious explanation, rather than viewing periods of gentle introversy as mere tiresome interludes before the next thrill-packed bloodbath. 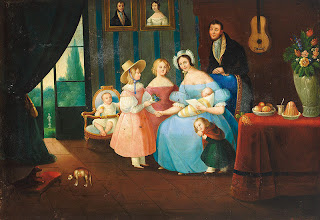 Worth applying, perhaps, to film and TV. I always remember Emma Thompson asking whether that splendid Ang Lee movie Sense and Sensibility wasn't closer to life as most of us experience it than the latest thriller or gangster movie. By the same token - bearing in mind that the only TV we watch is a string of catch-up episodes on J's iPad - isn't Come Dine With Me a bit more of the essence than generic, if well acted thrillers like Spooks and Hidden, which seems to me from a non-TVcentric perspective ridiculously overpraised? At any rate, it's always pleasantly surprising to be charmed on CDWM by the likes of Bobby Davro, a character one had written off (with little knowledge or interest, it has to be said) as a complete numpty.
Posted by David at 14:06

OK, that's it. Just cued Germania up on the Kindle (I'd rather have the book book, and knowing me, this will be a false economy, as I'll read it and then want to buy the book as book). From what you've described, both here and in an earlier post, though quite different, this looks to be a keeper on the same level as Magris.

Oh dear, Sue, you make me feel as if I'm pimping all sorts of material goods. But it's all to the greater glory of Art, honest.

In a way it's a pity the book as book doesn't have lovely illustrations to back up what he's talking about, but just having the writing makes the imagination work a little harder - and, as I pointed out with Vrancx, the reality can be a little disappointing.

O, heavens, you must know better than that! With posts like this, it's abundantly clear that you're shining a light on discoveries you've made for the sole reason that you enjoy them and hope others might, too. I've found a lot to enjoy as a result.

David - I was charmed to see copies of Germania, translated into German, (sorry, I've forgotten the German title already) in the bookshop in Koln / Bonn Flughafen yesterday morning. It suggests even the Germans like the book.

Good to know that, Catriona, but so they should - it's a (semi-comic) love letter to the country. I guess you share SW's feelings (which are fast becoming mine - so much still to see).