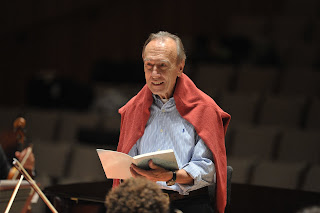 Here he is at the Festival Hall rehearsal, in one of four characteristically superb shots by Chris Christodoulou: Claudio Abbado, the greatest, with the score of one of the 19th century's weirdest symphonies, Bruckner's Fifth. Its wackiness can only seem the more pronounced in a performance of such freedom, suppleness and colour-consciousness as the one we got last night from Abbado's ever-flexible Lucerne Festival Orchestra on the Southbank: indeed, that made me wonder if there wasn't a case for going even further, totally over the top, because I nearly laughed out loud at several spots in the outer movements.

Just as well, anyway, because I can't take solemn, ponderous Bruckner interpretations. His individuality seems to me to lie in his riven quality, the way religious assurances always crumple. In the Fifth, the usually problematic (for me, again, I stress) Bruckner finale is replaced by a brilliant solution: first the clarinet's cheeky broom sweeping the old ideas away, then the tear-jerking brass chorale at the point when everything seems to have run out of steam. Abbado made no attempt to paper over the cracks, but he did pursue the chamber-musical quality that had been the chief virtue of the Schumann Piano Concerto in the first half. 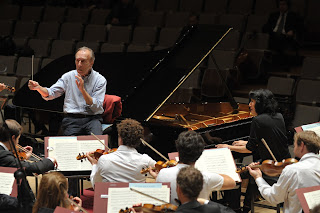 As in a late Mozart concerto, Schumann's woodwind have as much of the glory as the soloist, and Mitsuko Uchida is too good a listener and collaborator not to let the fabulous Jacques Zoon and his fellow-flautist shine. The Lucerne Festival Orchestra has certainly got through first oboists - first Albrecht Mayer, then Kai Frombgen, now Lucas Marcias Navarro (wasn't there a Berlin veto thing which led to the calling upon the Concergebouw principal?) - but they're all the world's best and Marcias Navarro led the way with incredible projection last night.

If Mitsuko occasionally charged with just a hint of panic at the thicker flurries, her sensitivity and clarity of phrase-turn made it all worthwhile. And it was surely a lucky escape that Abbado had fallen out with the unmusical Helene Grimaud before the festival performances - what a substitute! 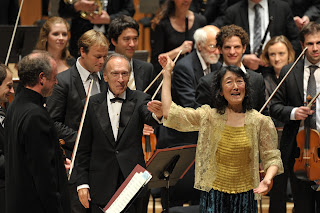 I'm coming to love most in Bruckner those twilight zones where only a handful of woodwind play. Again, Zoon had the dove's share of the best, supported only by two clarinets and bassoon at one point in the slow movement, sharing a chuckle with first violins where you really couldn't see the joins. That came in the Scherzo's trio, a Landlerish miracle as it dewily came across last night which I'd rather hear repeated than the whole damned outer portion: it's at points like this that I cry out inwardly for Mahler's constant evolution.

But Bruckner is what he is, and as Sibelius - another true original - pointed out, it may be messy, but it's always authentic. As was this interpretation (authentic, that is, never messy) from the greatest conductor-orchestra team of our time. Look at the photogenic players, who glowed and hugged each other with genuine warmth as they always do after every performance with Abbado. 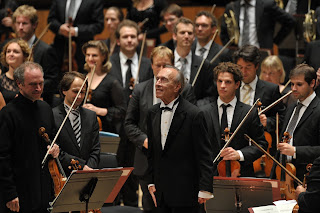 Wish I could go again tonight, when Mozart's 'Haffner' Symphony replaces the Schumann, but, alas, I'm teaching - Bruckner 4, as it happens, in preparation for Belohlavek's BBC Symphony performance next week*. Less of a rush, deo gratias, than yesterday, where I biked in to meet the players of the Pacifica Quartet (more on them anon) in the Wigmore at 3, taught my Passenger class at the City Lit, whizzed back to the Wigmore to do the pre-performance talk with the Pacificas, then pedalled off to the Southbank. Only Abbado could have made me miss the first instalment of the PQ's Shostakovich cycle, but I'll catch the second on Thursday.

*later - ouch: my students reminded me it's tomorrow (Wednesday 12). Just as well they did as I'm supposed to be giving the pre-performance talk...Fortunately there's just enough time to prepare.
Posted by David at 10:01

Hi David, have written you a letter but no idea where to send it. Can you send me your address or email? miranda@mirandakeys.com

Thanks!
Miranda Keys (Jenufa from the study day at Glyndebourne ;-)

Duly sorted, but rather than delete the message, I'll use the opportunity to tell any readers who may be in the vicinity that Miranda - who so swept us off our feet as the Jenufa cover on that study day - is sharing the role of Leonore in Fidelio with Riccarda Merbeth at the Teatro Regio, Turin.

Noseda liked her audition. Her performances are on 10, 14 and 17 December. May more of that come her way - which I'm sure it will, if all goes well.

Just been to the second night of Abbado and Luzern FO. wonderful playing,but alas the evening was ruined for me by my neighbour who tapped her feet out of time,and swayed from side to side non-stop.When I turned to complain,I saw she had an irritatingly seraphic expression,as if to say 'don't you dare disturb my reverie' What would you have done David?

Here's one of those impossible to answer questions, as it's probably worth a symposium on the topic, but I've been curious to know, since the last time you made this comment, what does make Abbado/Luzerne "the greatest composer/orchestra team of our time"?

Paul - if I could have kept calm, I might have tried a reasonable word between movements about how disturbing her actions were. Probably, though, I'd have come close to assault, if you can call laying a restraining hand on someone assault.

Sue - I liked what Andrew Clark wrote at the start of his FT article: 'This is what a festival should be about – rethinking the basics, banishing routine, striving to create something not normally possible. On all three counts this orchestra and this conductor have succeeded.'

First, no conductor has a greater or freer sense of rubato than Abbado in late romantic music, a finer ear for balance, a more collegial approach (just look at those smiles) or a stronger appreciation of what makes the world's best orchestral musicians.

Second, although there are some of the finest soloists in the band - though I didn't see them on Monday, Sabine Meyer and Natalia Gutman are there, as well as Kolja Blacher, Alois Posch, the wind players I've mentioned; three great string quartets have been involved over the years - an ad hoc collection of master players doesn't necessarily make a great orchestra (witness the car-crash of the 18 leaders in the first violin section of the World Orchestra for Peace).

Yet they come because they adore Claudio, whose music-making has taken on a whole new level of intensity since he passed through the valley of the shadow of death. And what they do together wouldn't be possible all year round. As Daniel Harding told me, 'it's not an orchestra, it's a love-in'. But in the best possible way.

The one concert DVD you have to have in your collection: their Mahler 9. This, as I wrote before here and elsewhere, was THE greatest concert I've ever been to, and I never thought I'd be able to choose...

You've given so many gifts with this response. I ordered the Abbado-Lucerne DVD of the 9th on the spot, and have read the Clark and your earlier account of the 9th now, too, which provides a wonderful guide to listening. From your earlier post, referencing Abbado/Lucerne doing Mahler's 4th, I will never forget watching Abbado as he brought the last movement to a close, his hands caressing the air, then one gliding down to rest on his chest. Thank you for all.

Oh good. As I think I wrote before, I'm glad I've lived long enough to find out just how high the level was to which the LFO/Abbado experience could raise concertgoing, and to try and pass on the essence with a bit of messianic zeal.

It all started with a DVD of the Mahler Resurrection, which made me determined to go to Lucerne independently. That I did for 7, 1 and 9 over the years (+ Abbado doing the Tchaik Pathetique with the Simon Bolivars), and it was all just as I'd hoped. Not sure I'd have done the same for Bruckner 5, but that, too, was unforgettable in London.

Hi David,
I have always liked Claudio's performances of Bruckner, although I haven’t heard him recently. He certainly doesn’t fall into the trap of over-interpreting the music. I fully agree that he is the best Mahler conductor around today. Others scarcely come close!

I came to Bruckner late in life and what really captured me was Gunther Wand’s performance of the 7th at the Proms. I can’t remember the year. I also saw one of his last appearances with the NDR Symphony in Lübeck conducting the 8th. By then he was over ninety, and quite frail, but still in total control. That was a performance that I will remember for the rest of my life, because he extracted every emotional element of the tragic slow movement by just letting the music speak for itself.
For me that is the secret of a good Bruckner conductor, so many fail to get to the heart of the music by imposing their own heavy handed interpretations.
Sometimes Bruckner gets obsessively hung up on working through his self-imposed rules. It’s certainly true that some of the themes in the 5th are less than impressive, but after about the second or third hearing, when I got to the chorale in the last movement and realised that all these strange fragments are based on just those few bars it was a real revelation!

Wise words, John. I agree with everything you say. Can't remember if I've mentioned it here, but certainly I can cite veteran horn player of the BBCSO Chris Larkin as saying that the Wand Bruckner 8 was perhaps the greatest performance he'd played in.