Rogue cards in the library 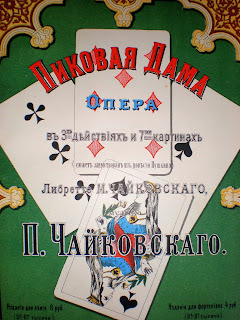 It's a good few years since I've tackled a complete opera for Radio 3's Building a Library. Yet having handled two Russian greats already - Eugene Onegin, headlined with the old Khaikin version, and Boris Godunov, crowned by Abbado - I jumped at the chance to run a relatively small gamut of available recordings of Tchaikovsky's 'masterpiece of horror' (as Janacek called it) The Queen of Spades. Pikovaya Dama is, of course, the proper alternative title; I make no bones about redisplaying the frontispiece of the precious old vocal score I brought back from Petersburg.

It's such a baggy operatic monster, at close on three hours, and yet I've come to love every jot and tittle of the Mozartian laciness Tchaikovsky weaves in between the musical-theatrical fibre true to Pushkin's short story. Yet that makes it devilish hard to illustrate. I must have had examples and script at about the hour-long mark, and never did quite whittle them down to the requisite 45 minutes (normally, you'll have to believe me, orchestral works fit the formula very well by the time I arrive in the studio). With the trusted help of that most collegial producer Kevin Bee, I think we've got it down to 48.

But what casualties! I can't tell you anything about the trajectory until the broadcast's aired on Saturday morning - now available (9/10) on the iplayer 'listen again' facility for the next six days, but I can publicly lament the passing of snippets featuring Olga Borodina (Paulina is just TOO incidental a character), Alexey Ivanov's Tomsky and Pavel Lisitsian's Yeletsky. Inevitable we had to let pass all but a sliver of the Mozartian divertissement in Act 2, and I couldn't really show much of what Tchaikovsky so fabulously does, proto-Stravinsky-wise, with selective wind ensembles for his recitatives.

Here's a bit of side-tracking atonement, then. First, that deliberately rather frigid party chorus launching the ball scene in Act 2, and set to a Derzhavin text, simply because it gives you a chance to see Richard Hudson's set - curiously, the masterly scene of Hermann's scaring the Countess to death doesn't seem to be on YouTube - and also because the diplo-mate is, ahem, rather prominent going through the dance motions (clearly Graham Vick WANTED him to be at the front of the stage, and he does look dashing in his uniform, though the moustache doesn't inflame my desire). Even so, what an odd number for Arthaus to choose as the trailer for their DVD.

Though Building a Library is essentially about sound rather than sound-and-vision, Yuri Marusin and Felicity Palmer DO get a look-in on Saturday. 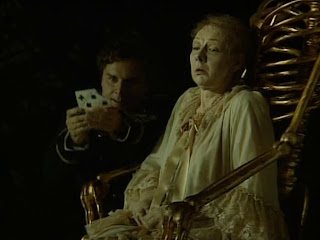 I lamented the absence of any film of Richard Jones's superlative vision, originally staged for Welsh National Opera. Yet there on YouTube are little one-minute snippets of when it resurfaced at Houston Grand Opera in 2010. Jones's greatest feat was to make ALL of the party creepy-interesting (I'll never forget the way Hermann puppet-masters Lisa while she's trying to listen to Yeletsky's aria). His solution to the Mozartian interlude-pastoral of the faithful shepherdess - which CDs reveal as interminable only if the conductor doesn't keep it lively - was pure genius:

So off with you to watch the Glyndebourne DVD - or indeed the superb film of the original story with Anton Walbrook and Edith Evans. 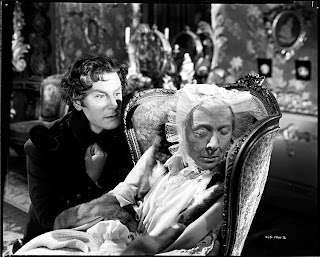 Alternatively you could always book a weekend in Leeds to catch Neil Bartlett's Opera North production that's opening soon (I found his Snape Maltings shoestring approach to Stravinsky's The Rake's Progress, which I caught a few years ago because I was giving a talk before it, really inventive). Worth seeing especially, I'm guessing, for a rare chance to see the glorious Orla Boylan as Lisa; when did we last see her in London - as Tatyana or Sieglinde at ENO, it must have been, and how long ago was that?

Some years since we met at Glyndebourne to record an interview about The Bartered Bride - Orla remembered the year exactly - I was delighted to chat to her again as we quaffed champagne in the Cologne Philharmonie after Markus Stenz's superb Mahler 8 the other Saturday, in which she'd played so regal a part. Little did I know, when I took this picture in the Philharmonie's recording studio, that Orla was celebrating a Significant Birthday the next day (she was hardly coy about it, but I'm supposed to be gentlemanly, I guess). 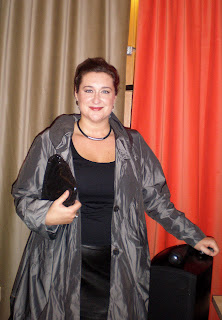 Anyway, after Saturday, I also hope you'll want to hear the leading sound version of Pikovaya Dama, too. But more of that anon.

By the way, I've yet to hear from my pals in Radio 3 exactly how the BBC cuts announced today, with nearly 2,000 jobs to go, will affect them. UPDATE: Roger Wright clarifies a bit here. It did appal me that the axing has been graced with the fair, oh-so-imaginative title of 'Delivering Quality First' (= 'Ditching Quality Fast'). And of course the sort of person who gets paid vast sums to think crap like that up should be the first to go. But middle management usually survives intact; s'ist Lauf der Welt.
Posted by David at 14:36

When I couldn't find the Walbrook/Evans Queen of Spades on Netflix, I bought a used copy on videotape. Fritz and I have been showing it to friends who had no idea of what it was and who absolutely loved it.

I remember the first time I saw a photo of one of the vocal scores you've collected. Now here is yet another beauty. I dashed over to Netflix, only to find (not surprising)they don't have The Queen of Spades movie with Dame Edith. But I have flagged the BBC3 broadcast and hope it will be available so I can hear it over the weekend. I am definitely with you on the "Delivering Quality First" types. Definitely the one who dreamt that up should be the first to go.

As you can see, I'm once again far behind in my reading of favorite blogs, but perchance you will understand as I must finish Summer Will Show...

Great minds think alike re Netflix, clearly. I have a double-DVD with the intermittently frightening 'Dead of Night' (little tales of terror, much the best being Michael Redgrave as a ventriloquist hounded by his dummy). I thought that QoS had been re-released, but I may be wrong.

I learned that the iPlayer 'listen again' facility isn't usually available outside the UK, something to do with our licence (though we pay for TV, not for radio).

Looking forward to your BaL, David.

Re the press release, seems to me to be a typo. When I listened to it all on R4's 1 o'clock news programme, it struck me that "Delivering quantity first" was the gist of it in reality.

Supply your own 'DQF' - 'debating questionable foolishness', perhaps; and if 'quantity', even the definition of that seems contestable.

And Roger, good people, was instrumental in the background to this Building a Library - on that CD he made up at the time of Jurowski's Tchaikovsky preparation with the OAE was a track featuring the ORIGINAL Hermann/Gherman, Nikolay Figner, recorded not so very long after the first performance. Of course it couldn't be included, but it does get a mention. Spasibo bolshoy.

I was able to listen to QoS on Building a Library this afternoon, glad to say. You may be amused to know that the Graham Vick/Glyndebourne production is available, at least here, on Netflix (imagine that!). My “repertoire” of listening and seeing live opera is small, and QoS isn’t one I’ve heard or seen. Of the excerpts, on first hearing, I was particularly drawn to the final male chorus and the last, haunting clip by Forrester, and was, of course, fascinated to listen to the differences in the excerpts you offered throughout. Pushkin's story (I’m sure in a musty old translation . . .) is now cued up on the Kindle, and the Glyndebourne DVD is set to come in the mail. I’m looking forward to both.

What - so you're NOT splashing out on the 60-CD Brilliant set? Rather uneven, I have to say, but with enough great performances and rare rep to make it worth the price of something like £2 per disc.

You are too much! I admit it's true, but it's only because I tied myself to the mast. (I did once buy a 20 CD set of music in order to get hold of one piece that could be found nowhere else, so you never know . . .)