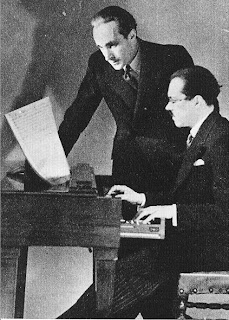 Never heard of a composer called Pierre Vellones (pictured above with Maurice Martenot in 1936)? Neither had I until Tuesday evening, when Cynthia Millar, friend and doyenne of that singular Messiaenic bird the ondes Martenot, paid my BBC Symphony Orchestra class at the City Lit a visit. I hope it doesn’t put into the shadow the magnificent light she shed on her long-standing acquaintance with the role her instrument plays in its most monumental incarnation, the Turangalila Symphony, nor all the splendid work she’s done as composer for films and TV, to say that the real revelation was a piece of light music – by Vellones.

A bit of an epoch-maker, as it turned out, since the delightfully dotty Vitamines - a precursor of a light-music piece I think is a real gem, John Malcolm’s Non Stop, better known as the old ITN news theme – was one of two pieces Vellones wrote for his friend, fellow cellist and of course inventor Maurice Martenot as early as 1935. Along with the 'Valse tzigane' Split, it featured both saxophones and the ondes as I’ve never quite heard it before, staccato rather than swoopily legato (though we did also hear a piece of music for TV Cynthia had written which emulated that approach). So here’s the Columbia a-side

pursued in more leisurely style by Split, with the ondes in more familiar mode.

These are two that, we agreed on Tuesday, the fabulous John Wilson could resuscitate with pleasure. And were we to flick back a few years, courtesy of the miracles of YouTube, we could also listen to a more serious Fantaisie Vellones wrote for ondes and piano.

It seems to me there’s almost as much mileage to be got out of the singular histories of these two grands amis as from the story of Lev Termen, the creator of the theremin. 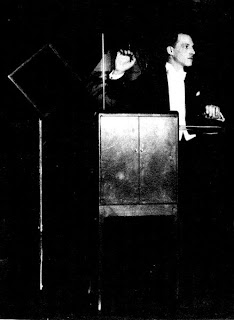 Which is of course operated quite differently from the later ondes – by adjusting finger and arm movements in a force field. The ondes Martenot comprises a keyboard (monodic), the ribbon (ruban) in front of it threaded through a metal ring controlling portamenti and glissandi 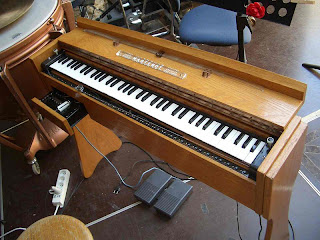 and of course the three speakers, of which the most attractive to behold below is the palme, with its lyre-like arrangement of 24 tuned strings. 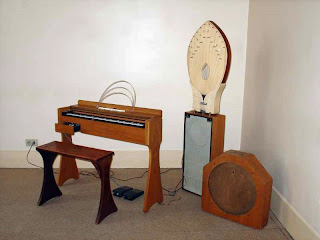 Nevertheless the artistry, especially in matter of manipulating dynamics and vibrato, makes the ondes irreplaceable by the plain old synthesizer or computer. And the same goes for the theremin. I take the liberty of reproducing another gem since one of my most treasured CDs, The Art of the Theremin, has gone walkabout. It features the great Clara Rockmore, Vilnius-born violinist pupil of Leopold Auer turned theremenist, accompanied by Nadia Reisenberg. What Rockmore achieves in Rachmaninov’s Vocalise is, of course, long-breathed beyond the wildest dreams of any singer, though several friends guessed it was Callas when I played it to them source unknown.

Ultimately, though, it’s back to Messiaen. You can hear Cynthia in a double whammy at the Barbican – Honegger’s Jeanne d’Arc au bucher conducted by Marin Alsop on 4 November, followed by the BBCSO performance of Messiaen’s Turangalila on the 5th. She’s also doing interesting experimental work at Snape Maltings with her nephew, a dubstep guru turned ambient specialist (I was really impressed with what she played us of that). But we have to end with Turangalila, and the loony tune of the ‘Joy of the Blood of the Stars’ movement, which despite its complexity and resources isn’t so very far removed from Vitamines… There are only two movements on YouTube of the amazing Prom in which Cynthia joined Pierre-Laurent Aimard, Andrew Davis and a typically gigantic National Youth Orchestra, but this will do.

Mom is visiting and long ago earned the right to my full attention, so I will have to come back to this next week, but I wanted to sneak in here in an available moment to say I've bookmarked this and can hardly wait! FYI, I finished Mr. Fortune's M yesterday and thought it a stunner of a book. Will be interested to know what you think.

I'm glad you persisted with Sylvia TW - half way as I am through Summer Will Show, I must say it doesn't grip me in the same way as Lolly Willowes and After the Death of Don Juan; and the writing seems less sure-footed. I'll be sure to move on to the Maggot.

Have been able to come back for a little read and listen. Such delights, though also am tinged with a bit of green envy, as I read not so long ago about a Turangalila performance on the West Coast, now here it seems to have skipped the east coast this time around and flown (Messiaen bird-like) across the pond. This must be quite something to hear live.

Indeed - once or twice (and especially with hundreds of musicians - pianist, ondeist and conductor excepted - under 19!) I got a bit fed up with it halfway through my third live performance, but will be trying again with the BBCSO.