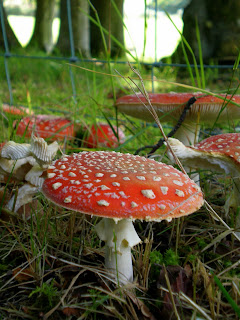 I thought better of calling this post 'the fruits of hidden sex' (though no doubt some sad searcher may still be disappointed as a result of my still managing to slip the line in here). The mushroom itself is, forgive the mixed metaphor, the tip of the iceberg, like the wonderful if hallucinogenic (I'm told) fly agaric fungi posing picturesquely on the edge of the drive to our dear friends' residence of Chapelgill, Broughton, in the Scottish Borders. Very near them is the world's first cryptogamic sanctuary, established in the Heron Wood of Dawyck Botanic Gardens with beech 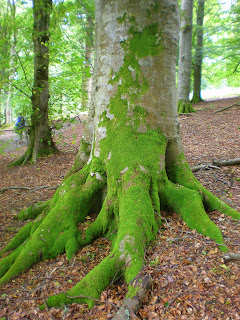 and Scots pine now seeming as much at home as the native oak and holly. My Collins dictionary leaves 'cryptogam' at 'any organism that does not produce seeds, including algae, fungi, mosses and ferns', but we're talking sex, the vast underground network of decay-speeding and new lifing of which the mushrooms are the brief visible manifestation.

And this was a deceptively early autumn flourish, at the very beginning of September, after which of course we returned to late-summer heat and dryness. Dawyck is the place for what it calls 'a dynamic community of native mosses, lichens and liverworts' 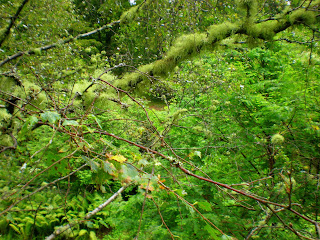 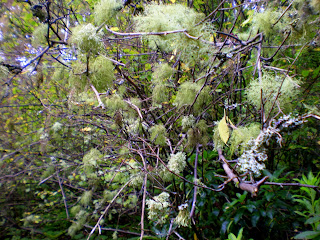 many of which flourish on the stonework around the garden. 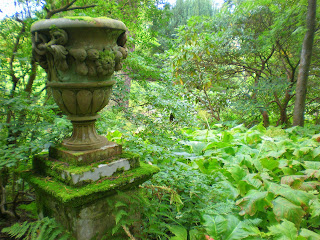 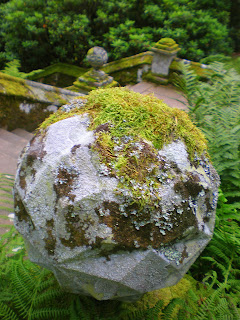 But Heron Wood feels like a place apart. About a third of the garden's 1,055 species of fungi* are to be found here, and on our September visit we could well believe it. 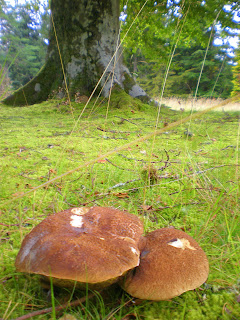 I've since had it confirmed that this is the tasty Boletus edulis, certainly a bolete. 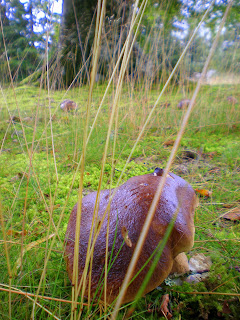 Yet even if my mycological studies were to continue, I'd never trust myself to distinguish the edible from the poisonous - remembering especially an incident on Samos last autumn when our Polish friend Lydia identified a rare, delicious specimen only to be told by a local Greek lady that it was deadly. She thought this might be to discourage furrin pickers, but we weren't going to take the risk. 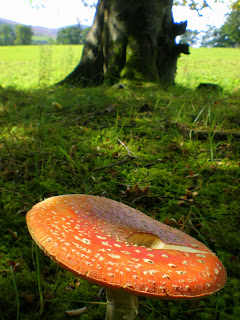 Anyway all you'd get from Amanita muscaria, the fly agaric, would be quite a trip. That too I'm not hazarding. But very pretty they looked too, flourishing under the beeches on the hillside in Broughton, ignoring the farmer's fencing. 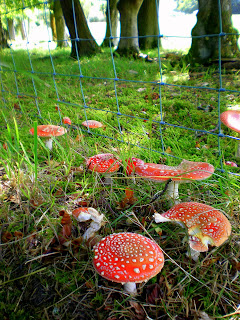 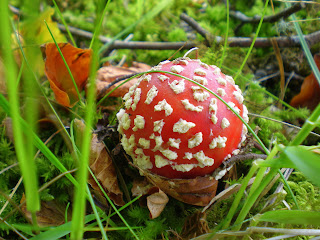 After this I was keen to join the 'fungal foray' at Kew on 18 October, but it was booked out twice over. I can't praise Kew too highly, though, for responding so rapidly to my requests yesterday, when I decided to take an excursion in search of the yellowish coral fungus named there by George Massee in 1896. Clavaria kewensis is now Ramaria stricta, and the information lady put me straight in touch with mycologist Dr. Bryn Dettinger. While waiting the return of Martn Ainsworth, he confirmed my bolete and told me he'd seen a clump of Ramaria stricta on the east side of the Banks Building.

The trouble with that is that it's strictly private and punters can't get anywhere near the east side. Never mind; here's a Wiki shot of the fabulous beast to show what I missed. 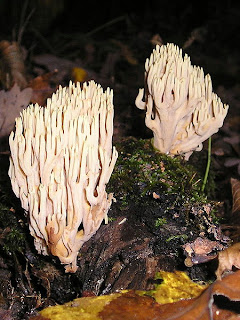 That said, no visit to Kew is ever wasted. I didn't see a single fungus anywhere, and believe me, I looked. But I did come across one of the autumn glories, the Italian maple, Acer opalus, looking splendid both without 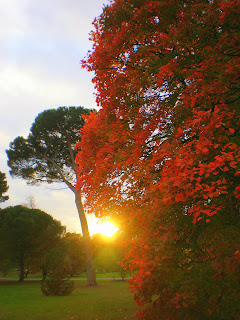 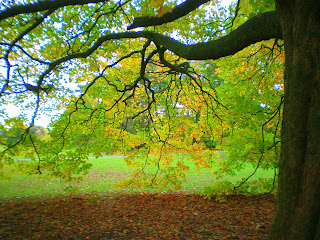 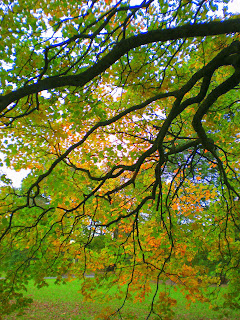 The ubiquitous parrots along the Thames were flagrantly displaying themselves nearby; whatever the damage to treetops, who could resist that flash of green? 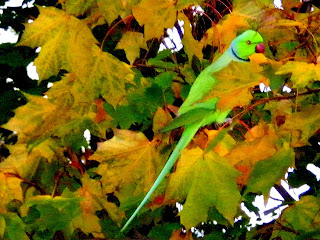 Sundry other maples were doing their stuff and Aesculus flava, the sweet buckeye, provided more perspectives from within. 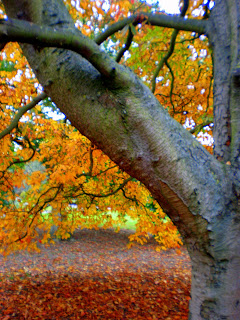 It was curious to walk around the woodland in the semi-darkness before closing time at 6pm. Geese, ducks and other woodland birds had truly taken over the gardens. But the fungi's above-ground flourishings all, it seems, were gone. Next time I need a reliable guide.

*Kew boasts around 2,750 including lichens. Its magazine article continues: 'To put the figures into context, there are around 2,100 native flowering plant and fern species in the UK, and around six to seven times as many fungi. It is this ration (developed by David Hawksworth) that underpins the now generally accepted figure of around 1.5 million fungal species estimated to live on Earth'.
Posted by David at 11:57

You truly are a fount of knowledge. Thank you.

In this instance, Laurent, it's all mugged up and VERY superficial. But I could get rather interested in this subject. Thanks anyway.

I was just about to post a comment on this great post yesterday when our power went out (huge way-to-early snowstorm here)! Just came on about an hour ago, so back I am. What an interesting idea, a cryptogamic sanctuary. I wonder what it takes to keep up. That fly agaric seems straight out of Alice in Wonderland! We have a wonderful nearby neighbor who is a mycologist & brings us all sorts of wild mushroom treats. Like you, we'd not dare try to pick any for ourselves. If you're interested, Bill writes lots of interesting posts over at his wife Leslie's site. Her site is linked in my current post (just up now). Her September 14 post "Hunting Wild Mushrooms" has lots of nice links to earlier posts. Of course, this is only if you're hankering to engage in yet another internet "time sink" to add to your already incredible knowledge store. Interesting that you saw not a single fungus at Kew--but as you say, no visit there is wasted. That Italian maple, what a beauty.

I do so love the parallel universes we bloggers inhabit - I heard about your snowstorm but it still seems inconceivable from our very mild perspective at the moment. Having said that, the first shorter day (clocks went back) was unspeakably dull, kocking on the head a planned Sunday jaunt to Frithsden Beeches.

Instead we hunkered down at home and I finished 'Summer Will Show' - gets quite gripping towards the end. I can see its singularity but never warmed to it like the others. But I guess the heroine is never really supposed to be hugely sympathetic - quite a challenge Sylvia TW set herself in that respect.

And I see we've been 'doing' parallel gardens. Racking my brains to think of the one on the Hudson I visited with my New York friend in a ferocious thunderstorm. A house high on a hill with lakes surrounding it?

Of course I'll look at your mycological friend's blog with pleasure.

A well connected friend ( based in France) was once staying at Chatsworth, and one morning went for a very early walk in the park where he met the wife of the French Ambassador, also a guest. They found some superb mushrooms and picked them for breakfast. This was not an easily executed idea. First the kitchen staff virtually required a written statement that if His Execellency and his wife ate the mushrooms in the omellette it was not the kitchen's fault if he did not survive.... and the breakfast table was sharply divided between those who ate the mushrooms and those who were watching with trepidation.

Mention mushroom-gathering and everyone cites the unfortunate case of the Horse Whisperer author...

I woke up and it dawned on me: it must have been Olana you saw--the homestead of Hudson River School painter Frederic Edwin Church. It is spectacular--I hope you'll have a chance to wander the grounds one day.

I agree re the "parallel universe" idea--lovely way to put it. Though I'm very glad you weren't parallel to us during our nasty snowstorm--even though I was here, I couldn't believe it. We're lucky, though. Many are still living without power.

As for mycology: I suspect you already know that John Cage was quite the mushroom expert. I went to check on Bill and Leslie this AM (power restored there, too) and learned that Bill has been invited to Bard to give a lecture on mushrooms as part of the John Cage Centennial in 2012. To prepare, among other things, he's reading John Cage's Mushroom book. He showed me a few pages—not surprisingly, that is one peculiar book.

And as for books: I like your assessment of Summer Will Show. It definitely did become more gripping toward the end, and I'm glad, therefore, that I stuck it out, even though it didn't yield the pleasures of Lolly or Mr. Fortune. A lot to do with the main character, I think you're right there, too. I'm on the hunt of Don Juan and looking forward to that.

Olana - that's the one. The storm was threatening as we wended our way up to the house on the summit, and broke just as we reached it. The previous time I'd been to Bard was between hurricanes, so it always seems to be dramatic weather up there.

What a shame Innisfree closes to the public in the winter.

Had forgotten the Cage mushroom link - must investigate.