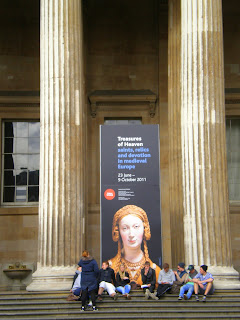 St Ursula and her putative 11,000 virgins in Cologne reminded me that I had to see the British Museum's Treasures of Heaven exhibition before it closes, alas, today. The museum has enough priceless relics to mount a show entirely from its own resources, but this one benefited enormously from the input of Cleveland, Baltimore, New York's Cloisters Museum - I WILL get there next time - and sundry small towns in Germany and France.

What I especially loved about the display were its starting-point in Roman roots and its inclusiveness of pilgrim relics from all over, spreading to Armenia, Syria and Egypt. It's a bit startling to see a tale from one part of the world represented by artists from another. I admired, for example, the early 8th Century Franks Casket, made of whalebone in (it's thought) Northumbria; but I was especially tickled that its scenes and runic inscriptions extended to the legend of Romulus and Remus, apparently an appropriated precursor of Christan redemption. The image the BM sent me - and all are copyright of the Trustees of the British Museum except where otherwise stated - isn't, sadly, of that but of the three kings alongside vengeful Germanic exile Weland. 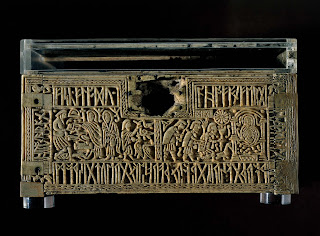 I didn't see any Limoges reliquary chasses of copper, gilt and enamel when I was in Cologne, but the exhibits under the Reading Room dome, well displayed so you could walk round them and read information on each panel, made amends. This one from 1220 displays the martyrdom of Thomas Becket - a major figure in the exhibition, of course, with some vivid depictions of the four murderous knights (only two here), followed closely by Cuthbert of Durham. 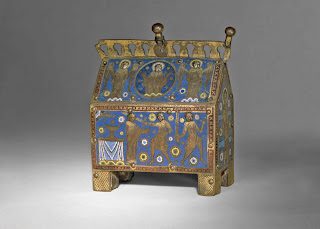 And this one properly belongs to Limoges itself, as the martyred St Valerie is that town's patron saint. 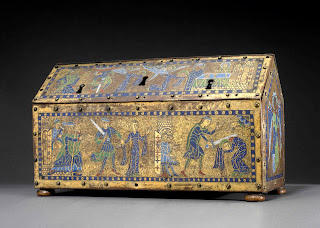 There were plenty of bits and bobs of saints' bones etc, the nonsensical part of course, except that as Simon Winder's Germania impresses ever more upon me, the complexity of what's behind these beliefs - the consolations, the placebo effect - as well as the beautiful artworks that resulted have changed my attitude slightly. Anyway it's hilarious to think of the Virgin's breast-milk in one of those phials in a cabinet, or bits of the baby Jesus's umbilical cord (courtesy of the Golden Legend and its midwives in attendance on the Virgin). After all, as Luther pointed out, if all the bones and skulls were put together, each saint would have have half a dozen heads and bodies at the very least.

So let's stick to externals, and immortal likenesses. I seem to remember there was one saint whose outer casing had been reunited with the wooden carving inside it for the first time since their original parting. Probably not St. Baudime of the Auvergne here, who of course lost his jewels and was stolen a couple of times, but remains in Saint Nectaire when he's not touring about. Image © Francis Debaisieux, France. 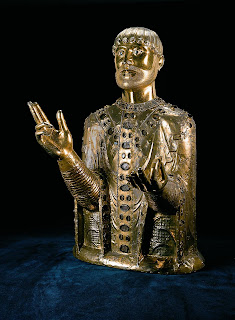 And, of course, the (horrid word) iconic image of the exhibition, 'an unknown female saint, probably a companion of St Ursula' as they put it, © the Metropolitan Museum of Art, New York. 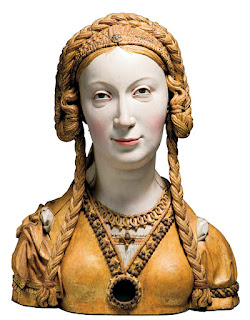 The exhibition extended to altarpieces doubling as reliquaries, like this one by Lippo Vanni from the Walters Art Museum, Baltimore (who owns the copyright), cruelly reminding us of the complimentary altarpieces exhibition we'd just missed at the National Gallery. 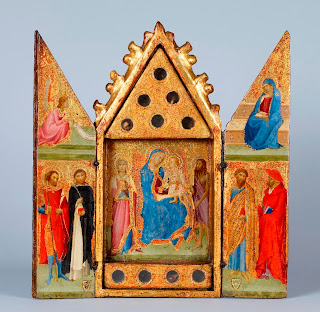 J thought the trail went on a bit, but it's curious historically to read of kings' competitive reliquary-treasury-building, and St Chapelle yielded a splendour or two. And then came the Reformation. Well, it was good fodder for superb art while it lasted, and it has such a talismanic, mysterious quality to us now. Three cheers for the things they put the saintly bits of bone in, whatever their authenticity.

And I can't resist, now that I have her mama's permission, featuring my latest lovely goddaughter, whom we bumped into as we came out of the exhibition. Curiously Ma Edsy had been about to ring us at 8.15 to tell us she'd got passes for the early showing, but thought it was too early. And there we all serendipitously were. Inspiration for Ma's art, to be sure, and here's Mirabel soaring angelically towards the fabulous glass roof of the BM's great court, with a little help from Pa Kit. 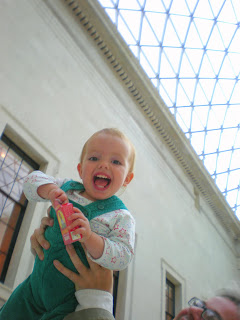 Gosh.......well the probable " companion of St Ursula" from the Metropolian in New Yok may have been a saint - no reason why not - BUT what a shrewd cookie..... one can imagine her ruling a kingdom as well as her men. Are we sure the Met have got the attribution right? And even if so, what were the origins of such a face? Also very relevant even today. I would NOT like to be on the wrong side of such a possessor of will power and ( at least she assumes) judgement.

Now that you mention it, she does look rather arch and not especially holy.

One can imagine that calm but poisonous voice:

"Was the hope drunk in which you dress'd yourself? hath it slept since? and wakes it now, to look so green and pale?.....Letting 'I dare not' wait upon 'I would' like the poor cat in the adage"

Indeed that companion of St-Ursula reminds me of a character in Agatha Christie's murder mysteries. She knows something.

Thought bubbles for the lady, please. I suspect it's the slight raising of her left eyebrow, without which she might look a bit bored and indolent. I wonder what Mona Lisa would look like with an extra rise in the brow?

Had a good chuckle at the exchange in the comments about the mysterious lady from the Met. I do find reliquaries peculiar, but you're right they made for a lot of beautiful art. The Vanni altarpiece, particularly, appealed to me.