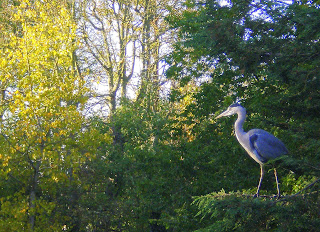 It’s only his aristocratic bearing that prompts me to give the famous – or so I learned – heron of Chiswick House’s fabulously restored gardens his title; to several folk passing over James Wyatt's beautiful 1788 central bridge, he’s well known as plain ‘Henry’: celebrated for sensing the arrival of his most regular feeder from the other end of the park, and for being fed by a Chinese lady with chopsticks. It was an unexpected bonus to an afternoon off; Friday was such a blue-sky day – and more autumnal than our recent heatwavy Indian summer – that I took a couple of hours out and cycled along the river, which usually means either to Chiswick or to Kew. This time I rolled up the drive of Lord Burlington's Palladian villa to be greeted by the guardian sphinxes and the facade shining in the sunlight. 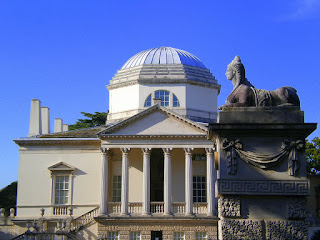 Anyway, here’s Henry at closer quarters perched elegantly but somewhat perilously on a delicate branch of a fir tree overhanging the lake, intermittently and not so elegantly dropping his load into the water. 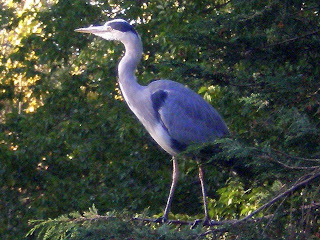 His local fame is only possible thanks to the fact that the grounds are open to all; the domesticated canine life was almost as interesting as the birds on the lake.

I can’t have walked around the grounds properly since the extensive English Heritage-advised restoration was completed in June of last year. I seem to remember the Inigo Jones gateway Burlington bought from that collector of collectors Hans Sloane and had transported to Chiswick under wraps; not so now. 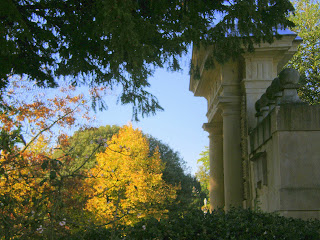 And here, at last, after long fencing-off, is the completely renovated Victorian conservatory with its legendary collection of camellias. Joseph Paxton started here before going on to bigger things. Again, it all feels like part of a limited-admission stately ‘ome set-up, whereas it’s a facility for everyone who lives locally to drop in and use. They even have several of the original vases of coade stone. 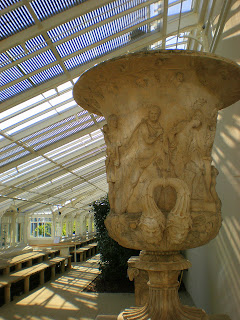 I've only just learned about Eleanor Coade (1733–1821), who made her living flogging architectural decorations and garden ornaments to stately homes made from an artificial stone which was subsequently named after her. There's a fine river god at Ham House, and the above vase is the real thing, too; the replicas in the early 19th century Italian garden look equally splendid. 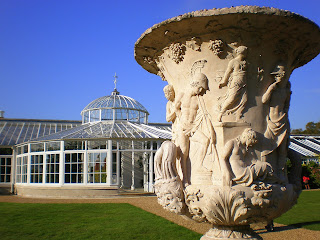 It remains dotted with heavily-scented roses still blooming in mid-October. 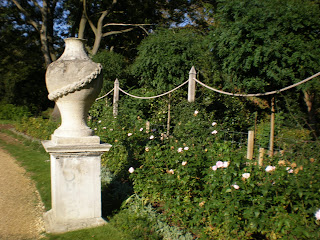 In another recently-renovated formal garden stands a replica of the Venus de'Medici on an intricately carved Doric column which I find a bit more interesting. 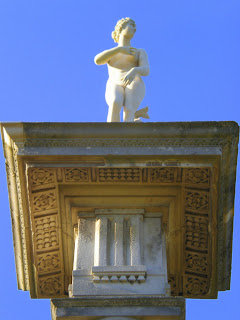 Lord Burlington's model was Hadrian's villa at Tivoli, from which he seems to have liberated several of his statues. 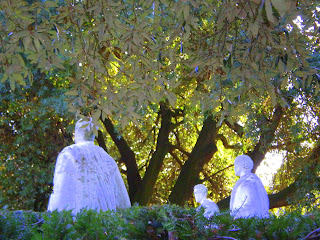 Burlington’s Ionic temple was one of the first buildings to be renovated, and even without its original surrounding orange trees it still looks handsome from several perspectives 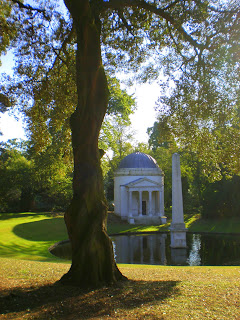 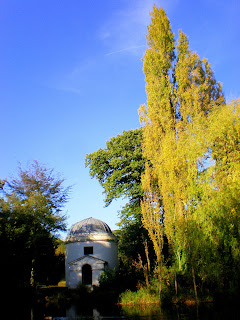 not least those of the nearby spiders. 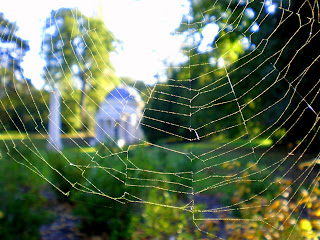 And so via the bridge, Henry and the south alleys back to the house 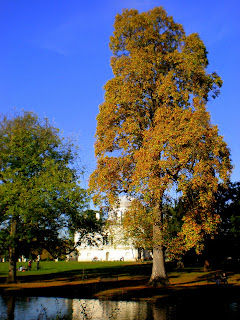 and bike. I must say the whole renovation has lifted the gardens to a new acme of free-to-all perfection. Some of the planting seems a bit questionable and virginal, but give it time. And the café, since it’s run by the impeccable Company of Cooks, livener-up of institutional fare from the Southbank Centre to the Royal Opera House, may be many folk’s first reason for coming here; and why not?
Posted by David at 10:22

*shiver*. Chiswick House grounds will always mean the walk to school for me, not a daily highlight way back when...

Times change, places change. Clearly a schoolgirl cycling by claimed 'Henry' as a friend. Time to exorcise the ghosts.

On our recent summer break in Lyme Regis, we noted Mrs Coade's house, Belmont, there. Pevsner (with Newman)'s Dorset, p261, ill 86. Positively loaded with her own product!

We loved Chiswick House and grounds when we lived in the vicinity.

Ah yes: 'with her acute sense of publicity, she made sure that her house was her own best advertisement'. It looks like the handsome facade can bear all that decoration. So Lyme Regis has at least two great women to its credit: Eleanor Coade and Mary Anning.

Now I would really love to see that heron fed with chopsticks! Henry knows what's good--not like our Innisfree heron who stood still 30 minutes today while we watched, not catching a single fish. (I'm sure he was just waiting until we walked out of sight, of course.) What a simply beautiful way to spend a beautiful day. Thank you for bringing some of it to us!

Of course my nature photography can't begin to compare with yours - I'm still only touting around my miniscule Olympus, not great for focus on zooming - but I'm grateful to have seen all this...

We really have to come to England to see this. I am sure Will would love it, just throw in a little opera.

Little operas are seasonally thrown in around the Ionic temple - not sure of the standard, though. I did see the Bubble Theatre's moveable Midsummer Night's Dream here, though, totally magical as we moved from house to wood and lake and back again.

I love the photo of one the urns with the conservatory in the background. Could I use it please in an article I'm writing about Eleanor Coade for the English Heritage website?

Yes, Katy, please do. A credit would be nice. Many thanks. You remind me, I'm overdue a cycle down the river to Chiswick Park again very soon, once Storm Edna has passed...

Many thanks David. I will certainly add a credit. The page will be here when published next week: www.english-heritage.org.uk/learn/histories/women-in-history/womens/eleanor-coade. Enjoy your bike ride!