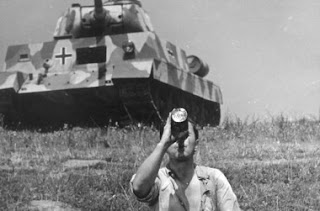 Encouraged by the film of The Passenger, left unfinished with director Andrzej Munk's untimely death in 1961, I looked out more Munk on DVD. Eroica (1957) is a strange little diptych about anti-heroic in the Second World War, its symphonic rhythms ironically evoking Beethoven. The artwork on the Czech DVD combines both elements more successfully than the cheap, American-based Polart copy I was nevertheless pleased to pick up for a small sum. 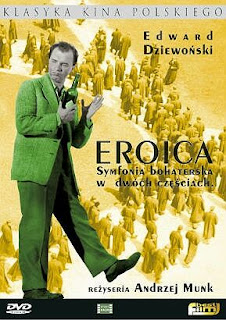 Of the two 'movements', Scherzo alla Polacca translates least well, I think, to a non-Polish viewer; there's a kind of humour here verging on the clownish which I didn't quite get, though I like the basic premise of a small-time black marketeer who drinks too much and gets caught up with the Resistance. Edward Dziewonski's slightly less than loveable rogue wanders into all sorts of scenarios where explosions and sudden murders seem almost incidental to his trivial preoccupations. 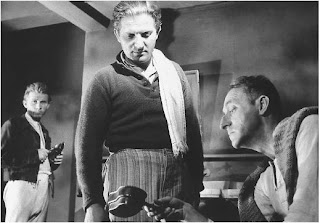 Ostinato lugubre, on the other hand, is haunting. The murderous monotony of life in a prisoner-of-war camp is intensified in a plot where the inmates need to believe in the heroism of an officer who supposedly escaped but is, in fact, hiding above a false ceiling in the barracks. The desperation of his insubordinate friend triggers the inevitable tragedy. In no way does this connect with the first 'movement' other than in its contrasting darkness. But its atmosphere is unique, and as with The Passenger one can only be aware of the film's proximity in time to the events it dramatises. There's a score by Jan Krenz very much of its era, but once it's set the mood of each 'movement' it plays discreet second fiddle to Munk's singular brand of realism.
Posted by David at 11:45

Haven't yet got hold of The Passenger, though it's definitely on my "to do" list. I did search Netflix to see if there was anything, and ended up ordering up Bad Luck. I found it hard to settle to, but based on your observation on Eroica, also available on Netflix, I think I'll give that a shot. (I realize that, of any of the films, The Passenger is the one I MUST see, and that will happen.)

I haven't seen Bad Luck. Maybe that's like the Summer Will Show of the output (though 'Scherzo alla Polacca' might not have encouraged me to persist with this one - if you get fed up with it, go straight on to 'Lento lugubre'.

Am assuming Dvorak's symphonic-world didn't grab you (or anybody else). But I'm hooked. 'The Wood Dove' is a delicate gem.