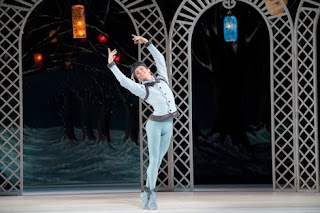 Take Frederick Ashton’s 1937 skating divertissement Les Patineurs: a trifle light as air, but oh, the complex demands that went into making it seem so. Balletic art, like any other, should conceal its difficulties, but I do find myself becoming ever more reverent in my attitude to the discipline of dance. And I wish I knew more about its steps and positions. So far my knowledge is as tentative as my gardening – I know the species I admire, in this case stunners like the multiple fouettés, the fabulous fish and fan dives, but not much in between. 2012 would be a good year for learning the vocabulary: but how – in classes, or just passively, online? At any rate I did feel last year that I shouldn’t sound off about ballet performances until I’d got more detailed knowledge about the moves under my belt.

Which is why the little extras served up on the new Ashton triple bill DVD are so meaningful. Actually it’s not exactly new, putting together a fair conspectus of Royal Ballet stars from 2004 – including Bussell and Samodurov – alongside those still very much active in 2010 (which is when Les Patineurs was filmed). 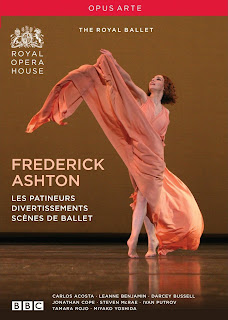 As I only have 30 words on it in a BBC Music Magazine roundup, it must be OK to rhapsodise about the bonuses to Les Patineurs, all three of which cast a richer light on Ashton's choreography to Meyerbeer's music (the Constant Lambert arrangements start so well, with extreme registers in the galumphing waltz, but don't go on to shine a la Lanchbery).

You’d probably guess that the insouciant role of the Blue Boy is a toughie, but how much more respect I had for spunky Steven McRae (pictured up top by Bill Cooper) after I’d watched the rehearsal sequence in which he’s put through Ashton’s paces by self-styled caretaker of a tradition Christopher Carr. I wasn't expecting it to appear on YouTube, and it wasn't there when I started writing, but now it is. [UPDATE: And now it isn't, since the Royal Ballet has reasserted copyright.]

Which makes some of my precis redundant, so I've hastily trimmed; but watch it through [clearly this no longer pertains, but it's a bit late to go back and reinstate all the original text I'd cut away] for wisdoms on the fresh up-to-dateness of the ballet, the difficulty for 1937, the breathtaking rehearsal work on the butterfly jumps which have defeated some male dancers - Baryshnikov included - though clearly not the original performer, Harold Turner. 'Head lower into the centre of the circle', urges Carr, 'legs flying round the outside...The hard bit is after you've done one set to get ready to go again.' And of course the sequence has to finish with the 'iconic' ending, 'hops in second and continuously turning until the curtain comes down'.

Well, that was clear, at least in the demonstration. And here's the Blue Boy's first solo - sadly not the number featuring the butterfly leaps - between the witty entry of the Blue Girls (Samantha Raine and Akane Takada) and the Pas de deux of the Couple in White (Sarah Lamb and Rupert Pennefather).

What's not to 'get' in that? Whereas you’d have to be a real ballet expert to understand the subtleties of Ashton’s Scènes de Ballet, third on the DVD bill – for some insiders, his finest achievement. I can sense the finer geometric points, but not as acutely as I do Balanchine’s extraordinary rendition of another Stravinsky score which dances even though it was never intended for choreography, the delectable Capriccio for piano and orchestra in its places as the second, ‘Rubies', ballet of the diverse Jewels. 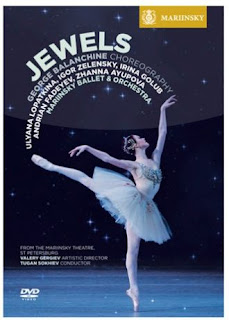 Whatever the chic New York gimmick that prompted this troika of Balanchine-filtered French (to Fauré), American (to the Stravinsky) and Russian (four movements of Tchaikovsky's Third Symphony) styles, it makes a satisfying whole. There are two magical short Pas de Deux in 'Emeralds', and inevitably the prima ballerina assoluta Ulyana Lopatkina glitters aristocratically in 'Diamonds', but my heart truly leaped at the centrepiece of 'Rubies', where Irina Golub's extensions and her playful mirror-work with Andrian Fadeyev make the most immediate impression. 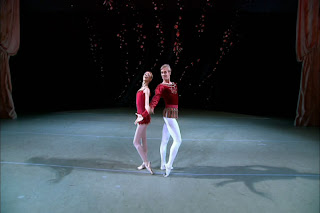 Technically, it's superb, but Balanchine proves once again that no choreography is worth its salt if it doesn't provide a perfect reflection of music that, in this case, is chameleonic and elusive. Which I suppose brings me back to first the notes, then the steps.
Posted by David at 12:19 26 comments: