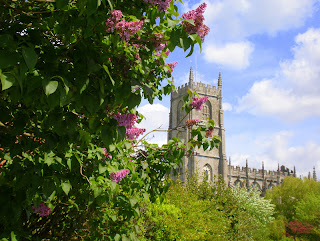 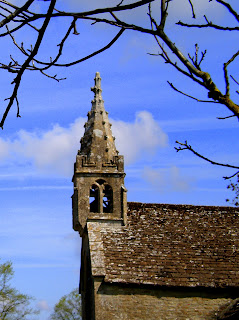 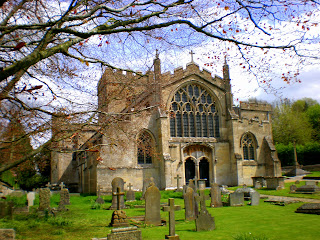 Flanked here by the pinnacled fantasia of St Mary the Virgin Steeple Ashton - a 'silvery battleship' as Betjeman described it - and the massy grandeur of the collegiate church at Edington on the edge of Salisbury plain is the spired bellcote of a small gem in an equally prosperous context, All Saints Great Chalfield. We started our Bank Holiday Sunday excursion there, skimming a lively plant fair our Lacock hosts were keen to catch and heading straight for the garden of the amiably proportioned manor at opening time. The church, which feels more like a cosy private chapel appended by Thomas Trop(e)nell to the late 15th century house - he added the bellcote to the 13th century building at the same time - is echoed by two topiaried pavilions or tree 'houses' of hollowed-out yews, part of Alfred Parsons' splendid garden design in 1910. 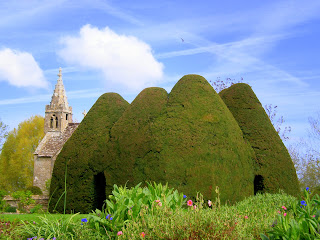 Tropnell further enhanced the little church with a family chapel, approached through an elegant screen with his coat of arms - gryphons, not cockatoos - in the centre. 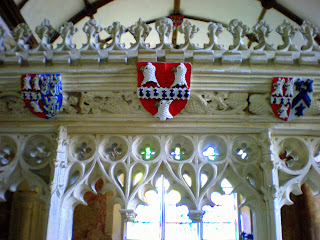 Mutilated but still striking wall-paintings of the life of St Catherine within are surprisingly well complemented by Andrew Taylor's 1999 windows taking St Luke's Parable of the Sower as pretext for a detailed representation of British nature. I've chosen just a couple of details. 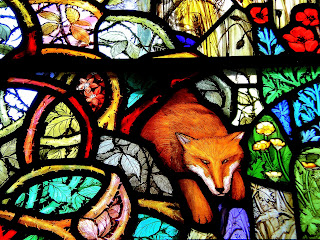 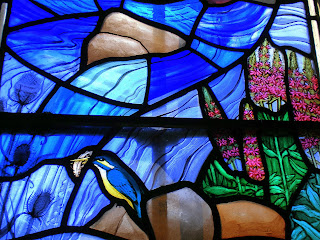 The good folk of Steeple Ashton lavished the profits of their cloth-weaving on what for me is one of the most magical flourishes of Perpendicular Gothic. 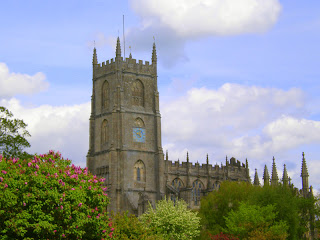 The steeple which gives the place its name was several times toppled in the 17th century and is no more, but the height of the tower which once supported it remains impressive. Beneath the pinnacles is a gallimaufry of gargoyles. 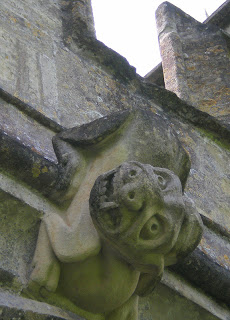 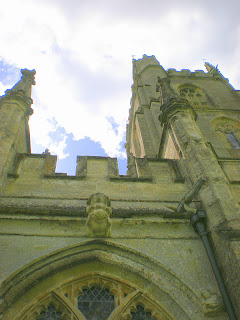 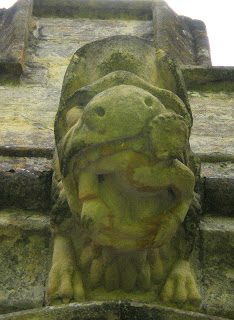 The porch gives promise of stonework within: its vaulting, which contains at its centre the Assumption of the Virgin, 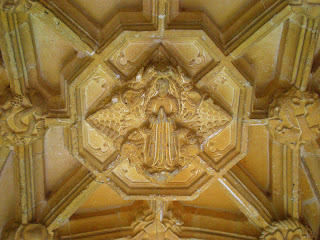 continues in aisles and chapels, though the original intention to have stone vaults throughout apparently halted when it came to the nave. This roof of oak and plaster with pendants and bosses gives the well-lit interior further airy grace. 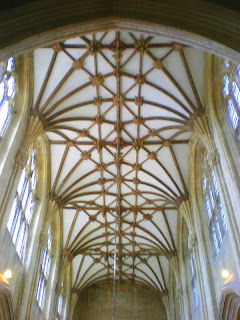 Fragments of medieval glass help to date the greater part of the church: the white rose and the sun-on-shield of Richard III mean the structure must have been completed before his death in 1485. 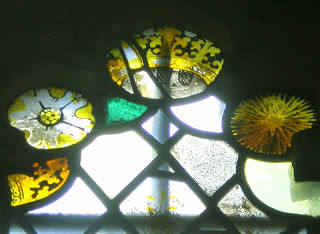 Just as Steeple Ashton is a great flowering of late medieval art, so the church of the Blessed Virgin Mary, St Katherine and All Saints at Edington, just below the north slope of Salisbury Plain, ranks as a handsome specimen of the previous century's transition from Decorated to Perpendicular. Its richness is due to its foundation, between 1352 and 1361, by William of Edington, Bishop of Winchester, who set up the neighbouring priory for the Augustinian Order of Bonhommes. Among whose number this monk may or may not be counted (the inappropriate blue of his vestment is due to a later recolouring, though some of the original has survived). 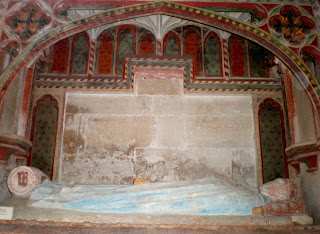 Again, he may or may not be a Baynton, as suggested by the visual representation of a bay in a barrel (tun) of wine. 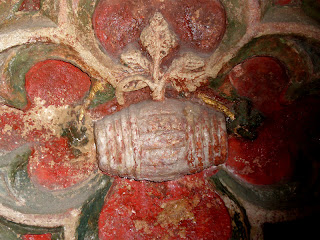 Even more splendid is the monument dedicated to Sir Edward Lewys by his wife Anne Beauchamp, who followed her husband to eternal rest in 1664. It quite seduced me away from the other glories of the 14th century chancel. The angel or putto poised with crown above the couple is of wood rather than marble, which accounts for his elegant suspension. 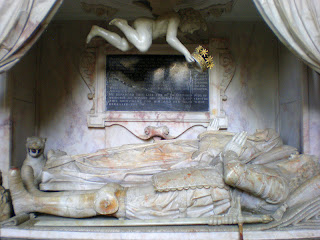 The children pray for their parents below 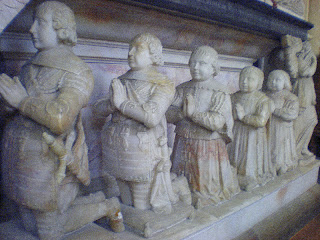 and are imitated - with a presumably unintended sense of humour - by the early 19th century monument to the Tayler family in the north aisle. These equally pious offspring are children no longer. 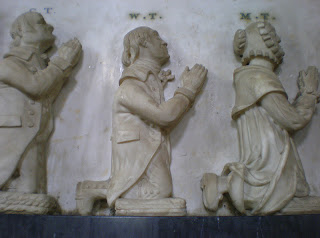 Very nearly contemporary with the Lewys monument are the plaster vaults of nave, transepts and tower. 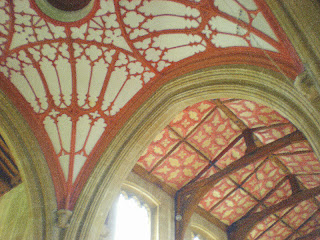 And so, our church homages done, we journeyed south for a circular walk around woods and downs. In a couple of weeks the bluebells may be over 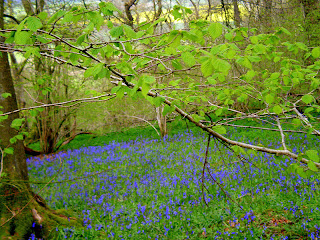 but the beeches will be in full leaf and parts of the woodland will be covered in the orchids of several species we found emerging on the slopes.
Posted by David at 17:54 20 comments: 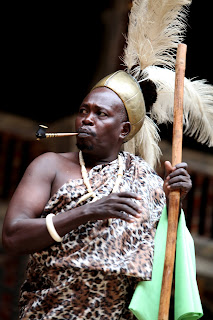 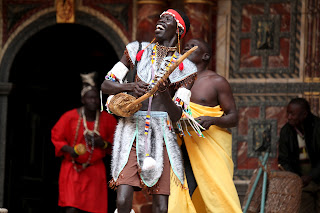 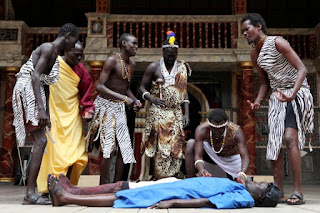 Production images by Ellie Kurttz for Shakespeare's Globe
Posted by David at 21:20 10 comments: