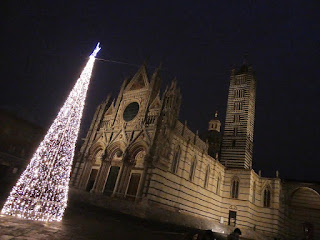 To hell if it looks pretentious, and in any case we feel a bit reborn ourselves, for at least three reasons: 1) getting away from blighted Blighty, 2) doing it by train, rekindling happy memories of Interrails past, and entering France/crossing Paris on the very last day when it was possible to do so and 3) seeing Italy again, the country I love more than any other, after a painful two-year-plus absence. Thus the first glimpse of an Alpine rock-face before Chambery. 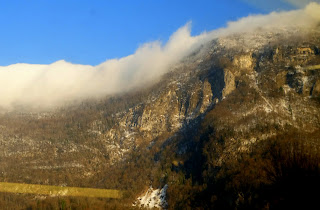 Impressions of Torino in detail must wait, but what a glorious, spacious city, and how amazing to see the Alps so clear from so many streets. This was new, and seemed miraculous to us. Then on to Firenze, and the impact of Baptistery and Duomo was so different from previous visits (not sure why). 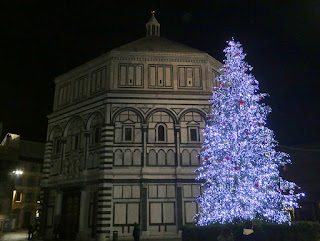 Now we're in the bosom of friend Sophie's warm and welcoming home in Siena. With her friend Pia joining us, the Swedish tradition of a big feast on the eve was adopted, and before that I managed to slip out to an intimate service at 6pm that had taken my fancy, in the district of the Oca (goose) contrada (Palio connections to be explained some other side). 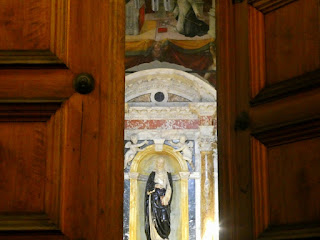 I think I did well, because the Oratory of St Catherine which belongs to Oca isn't usually open. It's a jewel, with Neroccio di Bartolomeo's statue of the saint very much central, putti by Sodoma above and finely detailed scenes from the life around the wall. Not right to photograph during the service, so the few shots I took were on departure, but you can see how lovely it is. 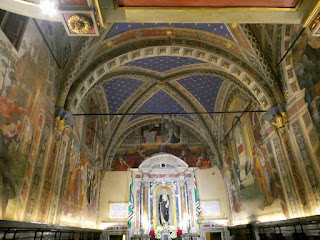 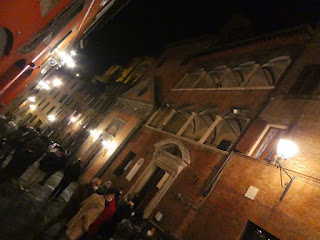 Later we strode out for Midnight Mass in the Duomo, so very different from when J and I attended 34 years ago. Then the building was packed, and Italians stood around and smoked or showed off their fur coats. This was a very sombre affair. The old ladies certainly weren't out - not the right time. But it IS so refreshing to be in a country where vaccine passes admit you to restaurants, museums, trains and places of entetainment. Masks on the streets, too. Why didn't our hapless government ever do all of this?

Horror and part-redemption: Ančerl and Haas 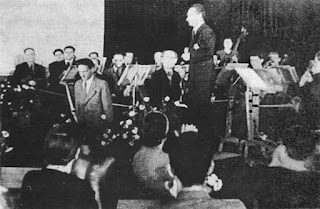 The still from an infamous film is not quite what it seems. Conductor, composer taking a bow, orchestra and smartly-dressed audience are all Jewish prisoners in Theresienstadt/Terezin. Two days later - the sickening cynicism of the Nazi propaganda machine! - they'll all be deported to Auschwitz. Few will survive.

Conductor Karel Ančerl was one who did, though his wife and son were murdered in the gas chambers. Arriving in Auschwitz, he stood in line with his friend, said composer Pavel Haas. Mengele was ushering him on the path to extinction when Haas, weakened, coughed. 'No, that one'. And because of this obscene twist of fortune, the composer was lost to us and the conductor went on to greatness at the helm of the Czech Philharmonic. After the liberation of Auschwitz, he also found the orchestral parts - except the one for double-basses - of the work being performed in the film, Haas's Study for String Orchestra. 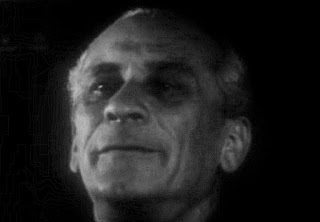 Ančerl features in the film about the film, apparently not downloadable but to be found on YouTube (the title is 'The Führer gives the Jews a city' in capitals). Thankfully it is not the unadulterated propaganda exercise about happy life in Terezin. It's all in German, without subtitles, but an essential watch, if you can bear it. The great man's steely precision about the facts and circumstances is moving in itself. Needless to say several 'students' on my Zoom Czech music course were deeply involved - two had relatives who were in Terezin and/or were murdered in Auschwitz. Pictured below: members of the dressed-up Terezin audience several days before slaughter. 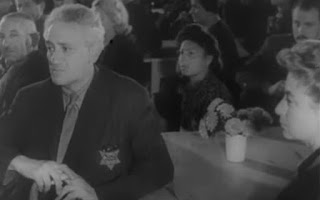 In every class, we've found something profoundly moving or troubling. Just think of the infant mortality and premature deaths which dogged the lives of the great Czech composers. As we moved through the decades, it became such a pattern that I felt I had to ennumerate. Smetana lost three daughters between 1854 and 1855, and his wife, who died of scarlet fever, four years later. Dvořák and his wife lost three children between 1875 and 1877. Janáček wrote in his 1924 autobiography that he would 'bind Jenůfa simply with the black ribbon of the long illness, suffering and laments of my daughter Olga and my little boy Vladimir'. No sooner had Josef Suk begun to mourn the death of Dvořák, his father-in-law, intending a five movement memorial with a triumphant conclusion, than his wife Otilie, Dvořák's daughter, also died. Thus the Asrael Symphony became a monument of almost unrelieved sadness. 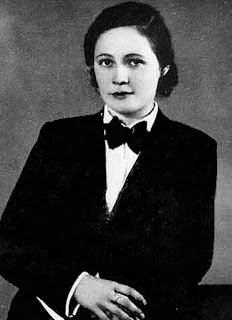 Even though Bohuslav Martinů and his wife Charlotte had no children of their own, he had cause to mourn the remarkable young woman who may have been the great love of his life, conductor and composer Vítězslava Kaprálová (pictured above). Like another composer who should have gone on to greater heights, Lili Boulanger, she died at the age of 25. That was in 1940, just as the Martinůs were fleeing the Nazi occupation of Paris and marking the first stages of their difficult journey to the USA.

If, as the late, great Jiří Bělohlávek insisted, we accept Gustav Mahler as a Bohemian - he was born in Kaliště before the family moved to nearby Jihlava - then here's the most devastating chronicle of family loss of all the 'Czech' composers. Apart from the major loss of his life, the death of his four-year-old daughter Maria ('Putzi'), of the 14 children to whom his mother gave birth, six died in infancy, sister Leopoldine of a brain tumour at the age of 26, while 21-year old Otto committed suicide, and the greatest shock of all to the young Gustav, it seems, was the death of his brother Ernst of pericarditis, aged 14. On the manuscript of the work he defined as his official Opus One, the fairytale cantata Das klagende Lied, at the point where one of the two brothers in the forest lies down to rest - his sibling is about to slay him - the composer wrote 'Ernst' in the margin. Below are stanzas written out by Mahler in 1879. 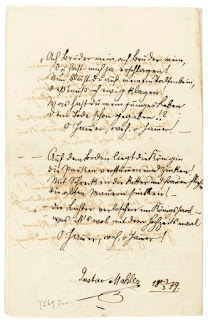 Das klagende Lied got a look-in when I covered fairytales in the sixth Czech music class. Curious how events of great emotional significance have intruded on every instalment. Smetana's Má vlast, the fountainhead in so many ways, could be seen or heard in filmed or recorded concerts of special import: most recently, perhaps, when Rafael Kubelik returned to his newly-liberated country in 1990 (there are Japanese films of all the movements played by a conglomerate orchestra under him in Tyn Square, as wel as the famous sound recording of the Prague Spring Festival concert with the Czech Philharmonic). A thrilling, fast and often rough performance has been preserved from a radio broadcast of Václav Talich conducting the work under German occupation. It's so moving to hear the audience, in the midst of wild applause, break in to the Czech national anthem (which you get at the end of this excerpt - there's a complete performance on YouTube which stops before that point).
The Hussite chorale featured in Má vlast's last two symphonic poems, 'Tábor' and 'Blaník', runs through to Karel Husa's Music for Prague 1968 - I need say no more of the significance of that. Tomorrow we'll be focusing on Martinu in the 1940s but also remembering Haas and other Jewish composers who were murdered under the Nazis. I steel myself once again for a tough time and will try not to blub again. Then, in just over a week's time, it will all be over - the 10 Czech music classes as well as the 10 Opera in Depth surveys of Jenůfa and Julietta (which the students now accept as another of the 20th century's greatest operas). My thanks to visitors Nicky Spence, Mark Wigglesworth, Jana Boušková and Josef Špaček. As for the latest special guest, I can't wait to expound on the three Monday afternoon hours we spent in the company of Gerald Barry, ostensibly covering his latest operatic masterpiece, Alice's Adventures Under Ground, but roving far and wide to embrace, among other things, Miss Marple, Edward and Mrs Simpson, The Power of the Dog and linen napkins daubed with lines from Beethoven's letters. More anon.
Posted by David at 09:13 18 comments: