Death in the south 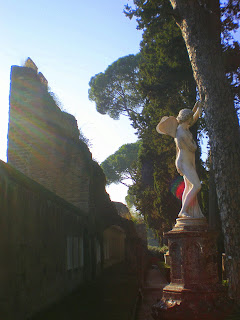 Romantic their poetic aspirations and their post-mortem canonisation may have been, but there was nothing mythical about the deaths of Keats and Shelley. I thought I owed my latest, serendipitous visit to their graves in the quiet corner of Rome that is the non-Catholic cemetery by the pyramid of Cestius a bit more background reading. Daisy Hay's Young Romantics proposes not only a more social history of the way in which the lives of the Shelleys were entangled with Byron as well as the lesser figure of Leigh Hunt, but a bigger celebration of those long-suffering half-sisters Mary Shelley and Claire (Jane) Clairmont. 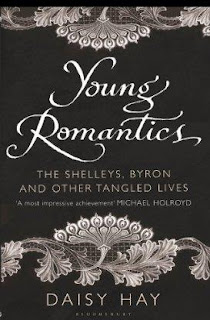 Keats, alas, is a marginal figure in Hay's history - a shame, since he was probably the nicest of the male pack. Hay makes it clear what a catastrophe was his last-minute bolt for Rome in late 1820 with the helper who's buried beside him, the artist Joseph Severn. 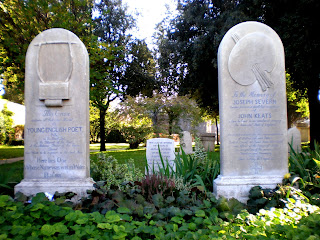 The idea was to seek a warmer clime for Keats's advanced tuberculosis, but they should never have left England: the stormy channel crossing in cramped conditions was a nightmare for a sick man, and all Severn could do in those cramped lodgings by the Spanish Steps was try and allay his friend's 'dread of never seeing [England] more' and attempt to ease a horrible death. There's still a waft of bitterness from the inscription on Keats's grave, designed by Severn and Charles Brown 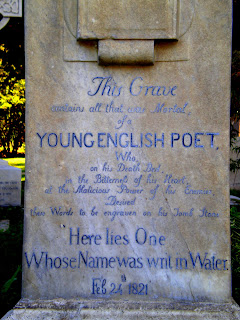 though a fairer plaque is set into the wall nearby. 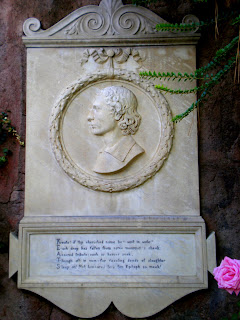 This is the most open, green corner of the cemetery with views over to the pyramid. 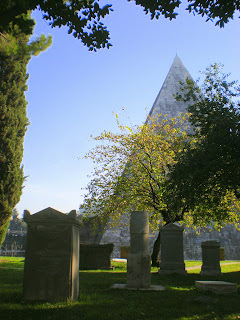 Three-year old William Shelley had been buried nearby, one of several young victims of his parents' roving around Italy. He succumbed to malaria in Rome; not long before his baby sister Clara had fallen sick on an unnecessary, hasty and uncomfortable journey to Venice, and died in her mother's arms. The cause, as with so many unhappy instances in the fates of the Shelleys, sprang from Lord Byron's unfortunate liaison with Claire, which led the Shelley-Clairmont trio to Italy in the first place. This is hardly the place to try and untangle its web, but the offshoot of that relationship was in many ways the most tragic figure of all, the little girl Allegra - separated from her doting mother after the early months, and consigned by Byron against all Claire's pleadings to a convent on unhealthy land, where she died aged five. 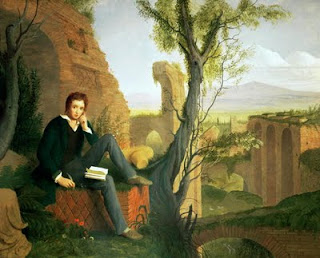 In all this, one thing seems clear: for all the vaunted equality of the women - for which Mary's mother Mary Wollstonecraft had fought so hard - the men always closed ranks. But how young, how untested, they all were! Mary was still in her early twenties when, having suffered miscarriages, the loss of two treasured children and several depressions which seem all too explicable, Shelley (depicted by Severn in a posthumous image above writing Prometheus Unbound in the Baths of Caracalla) was drowned in the Bay of Lerici - an inexperienced boatman in a poorly constructed vessel, the Don Juan. Shelley's preferred name had been the Ariel, which may partly account for the inscription on the grave I found so useful for my only-connect Arts Desk piece on Abbado's Shakespeare programme. 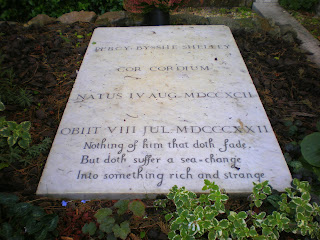 But what's in the grave? All that remained from a messy attempted cremation of the disfigured, washed-up corpse on the beach at Viareggio was an organ Hay surmises was the liver rather than the heart, and even that was squabbled over before being handed over to Mary. And there it is, cor cordium. Bit of a mystery why Edward Trelawny, Shelley's bragging friend of less than a year, should be buried alongside him; but he'd bought the plot of land, and there he was interred at the age of 88 in 1881. Mary as keeper of the flame had lived on until 1851, always doing the decent thing by her late husband and preserving a measure of immortality through her Frankenstein. Claire maintained an uneasy independence as governess and died in 1879, almost 60 years after Shelley's drowning. 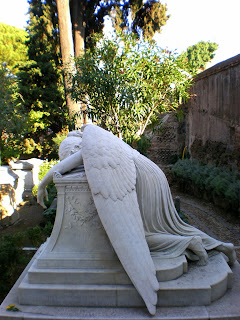 It is more than interesting to note that, in the age when so many died young of diseases such as TB which could not be cured, some people did live a long time. What they must have thought as time passed and passed !! What is usual now was rare then

Thus 60 years after the death of Keats we have Edward Trelawny, dying at 88. By which time the Keats/Shelley poems were becoming the most loved.

Patrick Bronte died at 84 having buried all his extraordinary clildren. Is there some record of his views of them? And his curate, Arther Bell Nicholls ( note the Bell) died in 1906 at 86.

But some reflections are true even today. When the Queen takes the Trouping of the Colour, one can reflect that none of those before her doing the trouping were even born when she first ( and for some years) was the focus of the ceremony

Thank you for this story. I did not know it at all. In fact I remember asking Will if anyone read any of those poems nowadays. Very complicated lives for us modern.

How complicated indeed, both. Imagine the life Mary had already lived when she left Genoa for England at the age of 26 - how much she had lost: the husband who had run off with her - and Claire in tow - when she was a slip of a 16 year old, two children, unborn babies, 'father, mother, friend'.

Laurent, I recommend - without having seen it, will do over the break - the film 'Bright Star'. There's also Howard Brenton's splendid play about the intermingled yarn of those young lives, 'Bloody Poetry', which I saw at the Royal Court many years ago with a young actor making, I think, his London debut - Mark Rylance, no less.

If you think Mary Shelley was amazing, wait till you read more about her mother. Imagine growing up in that shadow. Imagine knowing your birth had killed one of the finest minds of her generation. Widower William hung her portrait in his study, and little Mary gazed in silent awe at that famous face, all through her troubled childhood. Lots more info (from artistic interventions to academic endeavours) can be found at A Vindication of the Rights of Mary.

Thanks for pointing me in your direction, Roberta. I was impressed by MW's introduction to Vindication of the Rights of Woman in Alasdair Gray's fabulous Book of Prefaces (it comes between Blake and Wordsworth). There's a lively potted biography in the red-texted margins, but I want to know more.

My one encounter with Mr Gray, some years ago, leaves me with the recollection that he was keen on marginalia. So were many of the C18 writers. Did you know Gladstone annotated A Vindication of the Rights of Woman, while cogitating on a national system of education? Wollstonecraft has a lot of these hidden sons and daughters, as I call them. As for more on her life, just look at the top of my blog, where it says "Mary". Elsewhere, there's a discovery about Claire's father, too.

I am reminded of the advantage to be had by coming late to one of your posts: I not only get the benefit of the post itself—as you must know by now, I love the way you range across topics, following the thread of something to wherever it may lead—but also so many interesting comments (not that this is unusual Over Here). As an aside, going back to your Arts Desk piece, I was just listening to Tchaikovsky's The Tempest again today, with great pleasure. I also had the great luck of finding a CD of Sibelius's Tempest while in New York and I’m enjoying that thoroughly as well. Thank you for both.

Sue, I suppose I shouldn't be surprised that I've missed you, even though I thought you'd - wisely - be away from internet access for longer. I'm trying the clean-break method too, as far as posts go, don't know how long I'll keep it up.

You'll not regret the Sibelius purchase, whether of the original or the suites (which are differently orchestrated).

It is hard to strike a balance, isn't it? I made myself finish several books on my stack (and thoroughly enjoyed that), as well as listening through ALL my CD purchases at least once. I keep admonishing myself to try and strike that same balance going forward, but, as you can see, while the spirit may be willing, etc.

I love Sibelius's Tempest--what I have is the suites. Interesting to learn there are two versions. I'm going to keep my eye out for the original, as well, as it would be interesting to listen to them side by side.