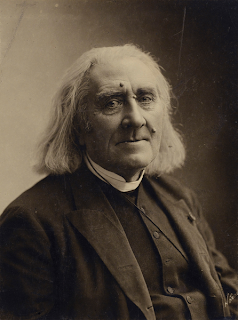 I've not read enough on the biographical side about Liszt to know if he died in despair. But his later years were not happy ones, as a clutch of photos including the above underlines. An earlier chasm opening up from the loss of two children must have deepened, and - naturally prone, it seems, to depression - he knocked back the absinthe. But unlike Rossini or Sibelius, he kept on composing, and left us some of the most forward-looking fragments of gloom or despair in all 19th century music.

The suspended or abandoned tonality wasn't exactly new - check out certain Chopin - nor was he first off the line in developing the whole-tone scale (only last week I heard another American academic trotting out the line that it was really Debussy's invention, but of course it goes way back to Glinka in the 1840s and possibly earlier). But I've been hearing these epigrammatic mood-musics this week in compelling recitals by Louis Lortie and Pierre-Laurent Aimard, and while Lortie made an epic balance of all-Liszt light and shade, Aimard's all-grey-to-black first half was quite a lowering experience, slipping in though he did neutral Wagner as well as unconsolable early Berg - straight out of Liszt's Nuages gris - and late Scriabin. Here's Aimard's most striking contribution - the one where the whole-tone scale and not just the tritone lollops about - Unstern! sinistre, disastro (only approximately translateable as Dark star! Sinister, disastrous)

So, no consolation for the old Abbe, nothing of Verdi's Falstaff fugue or Strauss's sunset song. By another of those many online serendipities, though, my blogger-ideal Susan Scheid on Prufrock's Dilemma - ie endlessly curious, responsive, encouraging one by an articulate enthusiasm to explore more - introduced me to a poet I'd heard of but never read, the Swedish visionary - and I hope I don't use that word lightly - Tomas Tranströmer. 80 this year, he's just received the Nobel Prize in Literature. Sue's informed post was on his attitude to Haydn, the stroke that in 1990 partly inhibited movement down his right side - encouraging Swedish composers to write left-handed pieces to keep his love of piano-playing going - and a real masterpiece of a poem, Schubertiana. 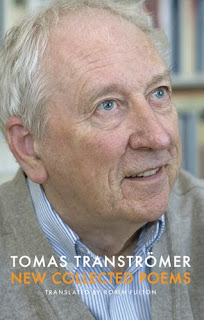 So I sent off for the latest collection immediately. Do read Sue on the essence of Schubertiana, which contains for me the most profound written sequence on what music can do for struggling man, but let me get to my point. Which is that between recitals, I was able to read Sorgegondolen in Robin Fulton's translation. The poem which gives this collection, written in the year of Tranströmer's stroke, its title is centred around Liszt's two pieces both called La lugubre gondola, composed while he was staying in Venice's Palazzo Vendramin between November 1882 and January 1883. 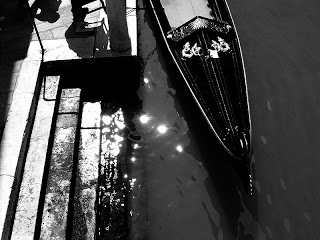 The host was his son-in-law and junior by less than two years, Richard Wagner, whose death on 13 February 1883 the gondola pieces supposedly forecast (Liszt also wrote a musical epitaph, which Lortie included in his Italian journey). Hence the 'two old men' of the poem's first line, 'staying by the Grand Canal/together with the restless woman who married King Midas/the man who transforms everything he touches into Wagner' (Cosima, naturally). Tranströmer intersperses his visions of that Venetian trio with three 'Peep-holes, opening on 1990', counterpointing his own dreams during a more clinical near-death experience. But of course it was the lines on La lugubre gondola which struck me and came in useful for the Aimard review. I hope I'm permitted to quote them more fully, as I did in a message on Prufrock's Dilemma; sadly this format doesn't permit the right indentation.

Liszt has written down some chords that are so heavy they ought to be sent
to the mineralogical institute in Padua for analysis.
Meteorites!
too heavy to rest, they can only sink and sink through the future right down
to the years of the brownshirts.
The gondola is heavily laden with the crouching stones of the future.

My YouTube choice would have been the interpretation of Krystian Zimerman, but these extremely evocative performances have the benefit of the score put up by the loving poster.

Redemption? I reckon it comes both through how these pieces can be programmed - Aimard was perhaps too austere in his first-half grimness - and how we approach them. Tranströmer does indeed transfigure, and what a contrast in those blue eyes (at least as captured in the cover photo for the New Collected Poems), that unsentimental glimmering optimism, to poor old Liszt. I'm reminded of what another great writer, Stefan Zweig, wrote in The World of Yesterday of another great composer, Richard Strauss, who was 68 when Zweig worked with him on the comic opera Die schweigsame Frau:

At first his face impresses as almost banal...But only one glance into the eyes, those bright, blue, highly radiant eyes, and one instantly feels some particular magic behind this bourgeois mask. They are perhaps the most wide-awake eyes I have ever seen in a musician, not daemonic but in some way clairvoyant, the eyes of a man fully cognisant of the full significance of his task.
Posted by David at 11:50

Paraphrasing Alan Walker:
Liszt travelled to Bayreuth in July 1886. Seventy-four years old, he arrived exhausted and ill. His daughter, Cosima Wagner, was very busy with the festival and so barely saw him. He dragged himself to Tristan, slumped in Wagner's box. Returned to his lodging house (note, not staying with Cosima). She banned visitors. He contracted pneumonia and died 31 July. Friends and pupils outraged at the lack of respect shown to him. No Requiem Mass for the Abbe.

Oh, my! You leave me wordless. Yet I will find a way to recover words so as to respond once I've mined this post. For now, this, thinking of that gorgeous Zweig quote with which you close: this morning I went so far as to watch the Nobel ceremony (something I've never been tempted to do) and came away with a handful of screen shots, which I have posted Over There (larger in the body of the post). You may find in them evidence of that "unsentimental glimmering optimism" of which you write.

Roger: many thanks for that. I ought to have Alan Walker's biography in the library.

Susan: it's all happening so quickly and - the only word, I keep using - so serendipitously. Fine, noble images indeed. I wish I could have seen the ceremony - maybe it's still available for viewing somewhere?

I hesititate in the face of this blog and the serious responses to add a note of almost humour, but the reference to the Brownshirts prompts me to tell why they wore brown shirts

Before WWI Germany had a colony at South West Africa ( now Namibia), all sand, so the many soldiers there wore sandy coloured uniforms. Then the war broke out and Germany was cut off from the world, and after the war lost its colonies. Hence there were lots of brown shirts surplus to army requirements. Many of the officers from South West Africa were in the early twenties in Munich when the Nazi Party was founded and the Stormtroopers kitted out, and Goring's father had been the first Governor of that colony. They must have got the shirts at a very attractice price as who else wanted piles of brown uniforms?

Not many people know this

Just last night, we watched Ken Russell's Always on Sunday, about Henri Rousseau. I think of it now, because Rousseau died penniless, unknown, and alone. A different story from Liszt's, but I’m reminded how often this is the case, against what odds the creative spirit so often must soldier on.

As I write, I’m listening to La Lugubre Gondola a second time. I tend to think of Liszt as all bombast, but you remind me it’s not so. I think of Tranströmer listening, and that sorrow has to sit side-by-side with optimism in him, but he will not let it drag him down. A remarkable poet, a remarkable man, and a remarkable woman with whom he shares his life. The Nobel, which I ordinarily don’t pay much attention to, had meaning today.

I’ve also had a listen to Khatia Buniatishvili playing Prokofiev Piano Sonata No. 7 on the prompt of your ArtsDesk piece. How could I not, with that description: “which seems to catch a gust of the icy wind from Chopin’s ever-startling final Presto and toss it disconsolately around”? The sonata, I realize, is one I know, though I haven’t listened to it in many years. I’m very pleased to be reminded of it; thank you for that.

As to your question, I seem to recall that the Nobel site planned to put up some video; I would think for sure a video of the ceremony, perhaps also the literature program (in lieu of a lecture) held earlier in the week.

On other fronts, I finished Germania today—what a jewel of a book—I want to go straight back for a re-read, but a rather tall stack of other books awaits (to which I have just added your Zweig).

And one last thing: later tonight or tomorrow brings another post at PD. For reasons you will realize when you see it, I want you to know it was written well before I saw this post, and I haven’t changed a word.

Hope I didn't pre-empt you in Tranströmerland, Sue...all to the glory of the great man. Look forward to reading what you have to say.

DD - no, I did NOT know that, but hie thee to Tranströmer or Liszt fast and bury those very subordinate Nazis...

Pre-empt? Absolutely not! It's sharing, spreading the word. Just what one wants to happen in writing a post. I love the other comments here, BTW--that brown shirt story is a keeper, for sure.

When Fritz and I were researching the life of Isabella Stewart Gardner while developing our libretto for the opera that premiered last May, one of her biographers mentioned that Isabella was in Bayreuth when Liszt died. Apparently, Isabella had met Cosima and Cosima befriended her.

Although nothing was said in the book, I'm going to guess that the main reason for the friendship was that extremely wealthy arts patrons, Isabella and her husband Jack Gardner, had settled a significant donation on the Festival. The biographer related that Cosima asked Isabella to walk with her behind Liszt's body on its way to burial.

It all ties up curiously, another kind of death-in-Venice-by-proxy (since the second act of Tristan, which Roger via Walker tells us Liszt went to just before his death, was composed there, and I doubt if the lapping strings at the start of 'O sink hernieder' would have had their weightless quality if Wagner hadn't been staying on the Grand Canal...

...where Isabella and Jack stayed for two months every summer at Palazzo Barbaro. Come to think of it, perhaps the ladies met there.

Wasn't the Palazzo Barbaro where Henry James stayed? And isn't there another tale of an extraordinary American lady he knew, who loved him, and who committed suicide? I even read a book on it years ago, but am ashamed to say my memory is hazy.