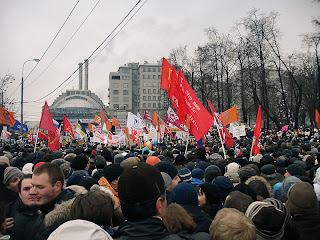 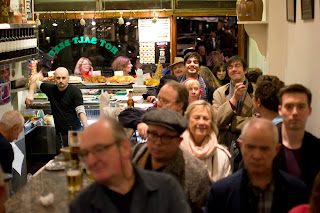 I little thought, when Tunisia set the democratic trail blazing at the beginning of the year, that 2011 would draw to a close with Putin-dominated Russia joining the party. But there they were south of Moscow's centre, about 50,000 of them, all protesting against parliamentary elections that no-one seems to doubt were rigged.

The top photo was swiftly placed on Wikimedia Commons by one of those ever-growing people whose courage we can't begin to grasp, Dmitry Mottl; below it is a kind of Where's Willy? shot by Brian Rybolt - who also took the next image - in which I am one of quite a few grinning gleefully not (knowingly) at the camera but at the fabulous Henry Goodman's witty song-plea to keep Gaby's Deli safe from needless obliteration by the ghastly Westminster City Council. Here's Henry with the owner, Gaby Elyahou, at the more or less impromptu 'Cabaret Falafel' on Thursday afternoon, where they were preceded by another wry ditty from Gaye Brown. 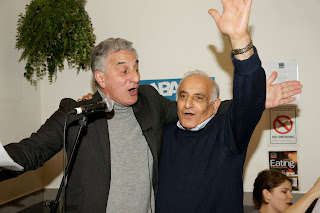 It's a drop in the ocean, yet equally reliant on force of numbers - as well I know in the dismal lack of response to save the black poplar trees on the south side of our gardens from a very dubiously reasoned execution - and once a London landmark is gone, it's gone for good. Daquise, unchanged since Coronation Year, outlived plans to redevelop the row of shops by South Kensington but then had a horrid makeover by New Polish Prosperity and is now unrecognisable. Here the proposition is to replace thriving Gaby's, which caters for salt-beef addicts and vegetarians alike, with a 'Strada-like chain restaurant', of which there are already hundreds in the West End. My colleague Judith Flanders set the ball rolling on The Arts Desk, clarifying the situation: sign the petition, please.

And I hope we'll have sound and/or vision of Henry's speech and song up soon. With that easy charm which makes everyone instantly jolly, he remembered sitting in Gaby's at various times with Jeremy Irons, Alun Armstrong and Ute Lemper. Whose image on the Chicago poster next to the cafe here - my pic as they were assembling for an outdoor shot - is both apt and a reminder that Gaby's is tied up with the soul of West End theatreland. 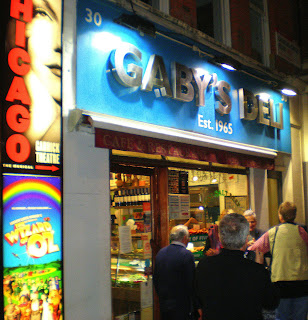 Then I was off, buying myself on the way a Chinese pork bun and a strong Italian espresso from other Soho stalwarts, to pure escapism and the fabulous Anne Schwanewilms digging luminously deep into Mahler at the Wigmore. But what a year it's been for people power. Not always successful - pray, or whatever it is you do, for the Syrians - and often with an ambiguous outcome; yet I can't remember a time in my life where the tide of the world seemed to turn so momentously in such a potentially hopeful direction. More, no doubt, to follow in 2012. 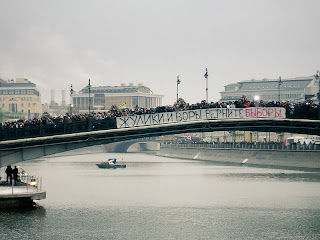 Aristotle in his Politics (V ii) wrote that one of the safeguards of tyranny was " the creation of mistrust, for a tyrant is not overthrown until men begin to have confidence in one another " (Jowett 1905 p 228)
Stalin certainly understood this and his power was founded on that mistrust - it was dangerous to speak outside a very narrow circle. But now there is a change. With the internet, mobile phones, Facebook etc people can establish links with others, and for a crowd to plan an action without having to trust any particular individual or group. Hence the uprisings.

Absolutely - beautifully and succinctly put. And many of these young Russians - though the protesters come from all opposition groups - are very Facebook and Twitter savvy, like their middle Eastern counterparts. I'd given up all hope of anything happening in Russia, though. They still await a strong, charismatic democratic leader. History usually throws one up, right?

History often throws up a strong charismatic leader in choatic situations since after a time the people crave for stability. Whether democratic as well is another matter.

One sad thing is that the ten years of something like democracy after the fall of communism were also the years of economic chaos necessarily accompagnying the transfer from an command economy to a free market ( bankrupt banks, inflation,barter instead of cash etc) Then things settled down in the new form, helped by the great natural resources of the country. So Putin appeared as the strong leader ( possibly as above) who sorted things, and democracy as unable to cope. Unfair, but understandable

Thank you for bringing this to my attention, I signed the petition, London does not need another chain restaurant.

We do live in interesting times. Let us hope it nets something good. We could use it.

I love your protest writ small. And, speaking of protests, Philip chariots-of-fire-couldn't-drag-me Glass (I just loved that, will say more Over There in due course) waded into #OccupyLincolnCenter and had them all chanting from the opera. Made quite the splash over here. Alex Ross as iPhone videographer caught it raw on camera; now it's been jazzed up into a video called "Visible Shape."

Laurent, let's hope that when you and Will visit London, Gaby's will have weathered the storm. And we'll 'treat' you to a salt-beef sandwich or falafel with full salads, according to what takes your fancy. Not exactly the Savoy, but that's part of the point...

I did hear about Glass joining the Occupy movement, Sue, which is a bit like the hardliners in the anti-Putin opposition. But it was quite a gesture, and I'll watch the film.