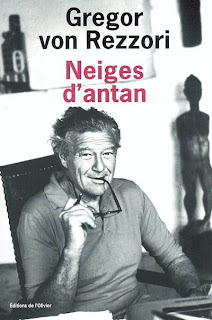 It was, as so often, Simon Winder in his exuberant meisterwerk Germania who made me eager to read something else, in this case Gregor von Rezzori's The Snows of Yesteryear. It's an awful title, as Winder points out, though of course much better in the original French, hence my liberty of reproducing the Gallic edition to preserve Villon's original ('yesteryear' was Dante Gabriel Rossetti's parallel neologism in his translation, I just found out). In fact the original Blumen im Schnee seems even weaker in English, 'Flowers in the Snow', but has the virtue of sounding more elegant in German than 'Die Schnee von vergangenen Jahr', which somehow sounds better when Strauss and Weill set the line to music.

Which is a lengthy preamble to recommending a modest but striking group of memoir portraits mostly huddled in Bukovina, that pungent, mixed-up eastern European borderland which found itself first in the Austrian empire, then in Romania and later still in the Soviet Union (presumably now it's mostly part of an independent Ukraine). Rezzori is probably right to start with the most outlandish figure in his young life, the nanny or wet nurse Cassandra - possibly so called, the author thinks, at the monastery where his father found her. 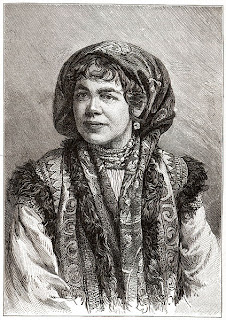 For quite apart from such unbelievable, avowedly innocent pagan antics as frolicking naked with the household dogs, Cassandra is a symbol of that multi-ethnic melting-pot which changed between the wars and, by the time of the second, beyond all recognition. Coming from a hamlet in the Carpathian mountains, Cassandra, 'who spoke no language properly, expressed herself in snatches of Romanian, Ruthenian, Polish and Hungarian, as well as Turkish and Yiddish, assisted by a grotesque, grimacing mimicry and a primitive, graphic body language that made everyone laugh, and that everyone understood'.

Rezzori places himself clearly within the historical faultlines that ran through his family. Purely through the chance of being born in 1914, he was set apart from the Habsburgian assurance-turned-neurosis which bedevilled his mother and, especially, his ill-fated older sister:

She had been born before the general proletarization of the postwar era, in a world that still believed itself to be whole, while I was the true son of an era of universal disintegration. The foundation of her good breeding lay in the self-assurance, however deceptive, of an imperium basking in glory and resting on a punctilious system of rules of comportment and behaviour. In contrast, I grew up in the dubious shakiness of one of those successor states described, rather derogatorily, as the Balkans. That this would give me the advantage of a more robust psychic makeup, which greatly facilitated my adaptation to our changed circumstances, in due time received dramatic proof. 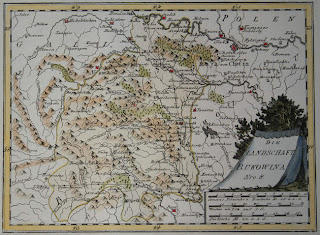 Rezzori deals either harshly or objectively, according to how you read him, with all his family members, but clearly views his broadminded Pomeranian governess, 'Bunchy' (from her name, Strauss), with greater love or rather kindness as the most civilizing influence. I'm not sure I like him and it would be overstating the case to put his literary talent up there with Zweig or Joseph Roth. But he does evoke with presumed truth and vividness a part of the world, also evoked in the later chapters of Claudio Magris's masterly Danube, that comes to seem increasingly attractive as a travel option now that so much of our beloved Middle East is out of bounds.
Posted by David at 09:22

I see in the Lit Review that there's a substantial new biography of Stefan Zweig by Oliver Matuschek. Praised.

Would be interested to read that, Roger, though there's no substitute for Zweig's autobiography The World of Yesterday (note: Yesterday, not Yesteryear!) Which I might just re-read.

Germania is definitely one of those books, like Magris' Danube, that tempts one down a thousand by-ways. I am back to it now, after having floated off to the land of Tranströmer for a while, and find I keep marking yet something else he mentions that I want to read. Of course, this only adds to the backlog I've already got from re-reading Magris. Oh, yes, and there's that book by Joseph Roth I have that's been cued up for some time. Not to mention the absolute urgency I felt to call down to New York City to have them save me a copy of The Great Enigma on the heels of that absolutely glorious passage from the Sad Gondola you left Over There (as you would say). There is, I have come to recognize--and particularly at the rate I read--not world enough and time, but I will just keep chipping away!

You know, Sue, that 'New Collected Poems' (Bloodaxe Books, 2011), has everything, including TT's prose 'autobiographical chapters'? An incredible treasury.

Which Roth? There's so much to choose from, though 'The Radetzky March' is the set text, of course. And I recently picked up a volume of his journalism. Una vita non basta, indeed.

I count the days until I get down to NYC and can pick up my copy of TT! As for Roth: The book I had in mind when I wrote is "What I Saw: Reports from Berlin 1920-1933." And you have now reminded me that, languishing on my bookshelves, is The Radetsky March--not to mention a book of Roth short stories that I dipped into at some point, then put aside. Of course, I had to look up a translation for una vita, non basta. Right you are. I had best get cracking, here. And may I have nine vitas, please?

'What I Saw' was the 'volume of journalism' I was thinking of - when I looked in the to-read pile I just couldn't find it.

May I warn against regarding Germania as reliable on historical fact. The prose is amusing and some insights quite valuable but facts and judgements are often wrong and the analysis confused.I might mention "the general low quality of monarchs" of the eighteenth century. In that century we had Federic the Great and Catherine the Great. On the same page (222) the text praises Maria Theresa, and ( as great women rulers)Catherine and her predecesor Elizabeth. Some lack of quality!! -and what a confused argument. Frederic is not mentioned at that point but earlier (218) he is said to be the only or first ruler to put Brandenburg/Prussia on the map, ignoring the Great Elector ( Frederic's great grandfather). Treat as amusing and be careful

Inconsistent rather than inaccurate, surely, David. Anyway as popular historians go, he's a much better read than any of the others - and Figes, Sebag Montefiore et al get facts wrong at a much more would-be serious level.