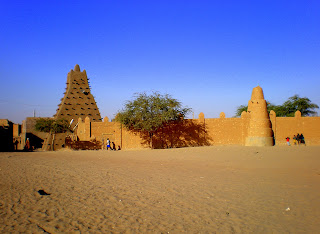 1. If you’ve planned a trip to Mali, don’t cancel completely because of what you’ve read in the news. I’m not trying to drum up more business for our dear Sophie’s fabulous mud hotel in Djenne if I say that you should perhaps think of following Foreign Office advice and not venture north to Timbuktu – as we did a couple of years ago (Sankore Mosque pictured above) - or to the annual music festival in the desert, but instead spend time (if you hadn’t already planned it) chez Sarin at the Hotel Djenne Djenno. I imagine the singular Maison Rouge at Mopti would not be out of bounds either. 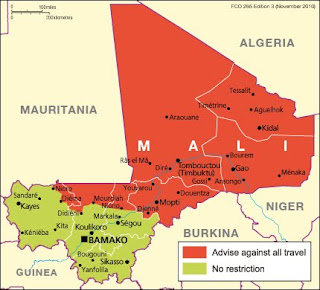 Weirdly – and I’ve no idea on what intelligence these things are decided – the FO’s danger line seems to include Djenne in the no-go area. But the fact is that the recent debacle which happened in Timbuktu only has one other counterpart south of the Niger, in Hombore, and the circumstances of that kidnapping are dodgy, I’m told. As Sophie points out, the isolated situation of Djenne and the fact that it has to be reached by ferry would make it difficult for would-be terrorists to make a quick getaway. 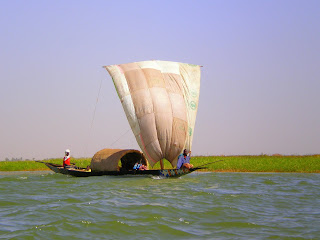 I wonder if the favourite part of our trip (apart from staying with Sophie in Djenne, of course) – a journey down the Niger on a pinasse from Timbuktu to Mopti, scene from which pictured above – would be ill-advised these days. Shame; but bigger shame on the extreme Islamist movement which is decimating Mali’s fragile tourism. One plus is that you might see less of the haughty French tour-groups who ruined our time in Dogon country. The whole France-Mali relationship has long been highly dubious with respect to the way that the French consulate seems to have been punishing its former African colony by advising its citizens not to go; but it’s true that Mali needs to take a tougher stance on harbouring terrorists. 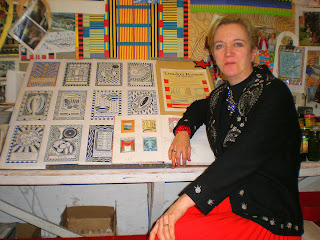 2. Sophie’s equally inventive artist-friend, and one of our most loyal, the wondrous Cressida Bell (pictured above with the selection of designs, and choice, for the cover of the latest London Review of Books), has just hosted an open-studio weekend along with other artists in Hackney, always a treat. The neighbouring shops proudly put out a flyer saying ‘as seen on TV’; you know what that means. But I enjoy a jaunt to Clarence Mews and get a kick from the vibrant fabrics; so in this instance my advice, rather than plea, is to take a look at Cressida’s online shop for a few gift ideas. In case you're wondering, the below shot was taken after close of business on Saturday, when many of the silks had been sold. But it still looks very colourful. 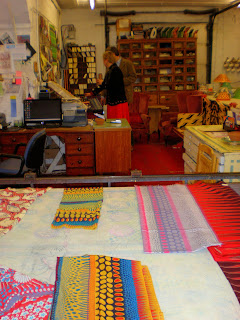 3. There are plenty of non-seasonal events still to absorb – I’m going to a string of master-recitals this week – but by Wednesday 14th, if you’re in London and free, you might feel sufficiently in the mood to attend an event organized by another dynamic friend. It’s ‘a celebration of Christmas’ at St Botolph without Aldgate (not to be confused with the one without Bishopsgate), adjacent to Aldgate tube station, a splendid place for a concert. 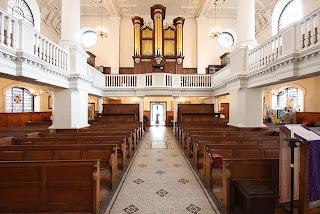 The event is in aid of the very worthwhile charity Maytree, which provides a London sanctuary along with counselling for the suicidal. Check out the charity’s website. 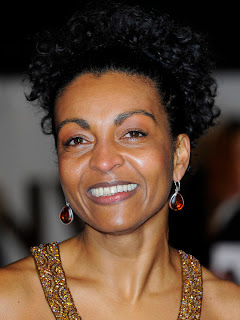 Star, keynote speaker, call her what you will, of the proceedings is actress Adjoa Andoh, who featured in Clint Eastwood’s film Invictus and may be a familiar telly face from Casualty, Eastenders and Dr Who. Other artists include the Belair Wind Quintet, the Hawthorn Singers and a team of hand-bell ringers. Audience participation, wine and mince pies included; 7.30 start, tickets a bargain at £10 on the door or online here. Hope to see some of you there.
Posted by David at 14:44

That mud hotel looks fascinating. Who would have thought it? Bell's fabrics and patterns are stunning, and the charity concert sounds like a wholly appealing event. Three lovely choices, then, to ring in the holiday season.

Thanks for the support as ever, Sue. You really should take a look at Sophie's blog, linked right, on daily life in Djenne and the rewards/frustrations of trying to do all manner of things there. It's unique.

I should point out that none of my three muses asked for the publicity, by the way.

Dear David, May I say how wonderful I think you are to invite us to all of these concerts. Unfortunately, I am going to the Messiah at the Barbican on that very evening. However, I will be going to Sibelius on the 16th. If I should see you there I am going to buy you a well deserved large glass of wine (pension provide). Yours, as ever, oap.

Mysterious elder, thank you - I certainly shall (serious Sibelius with Saraste so late into the daftest month cannot be missed) so I look forward to my glass of wine (a modest one will be more than generous).