From Tarby to Edna in Wimbledon 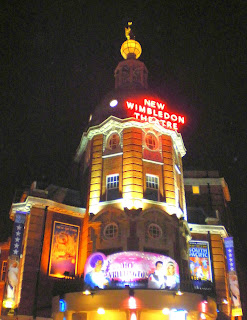 My jaw aches. That's partly because the root-canal treatment continues weekly, with various attendant degrees of horror, but mostly because I went from a grim hour or so in the dentist's chair yesterday to laughing 'til I cried at the most relentlessly funny show I've seen since the last production of Noises Off. Yes, good people, a panto. The Arts Desk needed Dick Whittington at the New Theatre Wimbledon covered, and I went with the idea in mind that the global gigastar of Moonee Ponds, Dame Edna Everage, would be up to her usual tricks if all else failed. 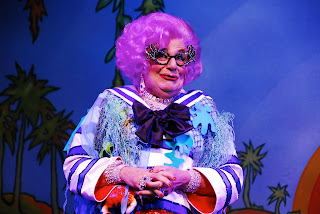 She was, but how I underestimated the rest, and what a shame the ten-year-old I thought would love it turned his nose up at the idea of a drag star (my fellow child-at-heart Edwina came instead, and marked it way above the Hackney Empire panto she'd seen the previous evening). The comedy hardly ever let up; different kinds and levels of humour, all first-rate, came from Renaissance writer-director-dame Eric Potts as Sarah the Cook (alas, the only picture they sent me of him, along with the above, has the dame marginal to the Dame) 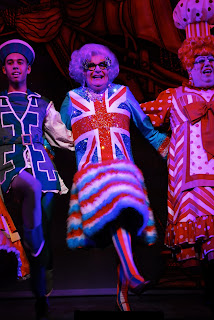 as well as Kev Orkian charming the pants off us as a stand-up Idle Jack - Charles Spencer, how could you not be amused? - and break-dancing small personage Ben Goffe. The three of them pulled off an endless - and endlessly funny - routine in the second act of which the Marx Brothers would have been proud. But here I repeat myself; read the review.

There I also self-indulgently divulged when I last saw panto in Wimbledon: as a cub scout, lured backstage by peer pressure to get Jimmy ('Tarby')Tarbuck's autograph after Jack and the Beanstalk*. Strange to tell, I don't remember nearly as much about it as I do about an earlier Cinderella at the London Palladium with Cliff Richard and the Shadows, no doubt prompted by the soundtrack which I still possess. 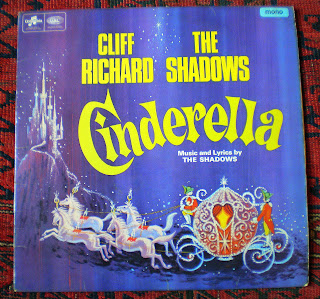 The songs are good! And so are the Shadows' instrumental numbers. And look at young Cliff back in 1967. 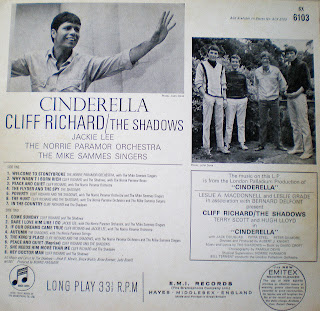 I'm told I had one of my usual agonising childhood ear infections, and remember being propped in front of the black and white telly shortly afterwards. The only other panto of which I have any memory is one in which a muscle man in leopardskin underpants did his routine to the usual tune, though don't ask me where that was.

As for Wimbledon Theatre, now the New Wimbledon Theatre under the very canny management of the Ambassador Theatre Group, it hasn't changed within and strikes me now as rather beautiful and well-preserved of its ilk. Certainly the best thing I saw there in my youth, apart from very good London Transport Players shows which my grandfather, who worked for LT, always insisted we saw, was a London Festival Ballet Nutcracker. This would have been 1970 - must dig out the season programme, which I think lurks in a box in my mother's loft. Galina Samtsova and Alan Dubreuil were the Sugar-Plum Fairy and Prince Orshad-Coqueluche (that's Coughdrop to you, so much for the poetry of the Pas de Deux), but of course I was much more struck by the sets and the score. And this was probably the fullest Tchaikovsky version ever; when elsewhere has anyone seen Mother G(C)igogne, that fabulous number which ought to end the divertissement (and did in 1892; how surprised I am to find Vsevolozhsky's original design reproducable)? 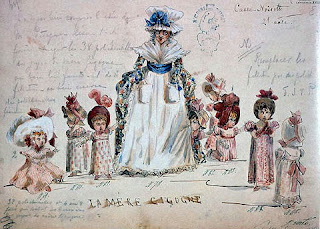 And I bet few of you have seen the English sailor's dance in the divertissement. Which as it resurfaced many years later on CD, turns out to be John Lanchbery's arrangement of Tchaikovsky's sketches for a Gigue or Jig. That was class, and I'm sure I sensed it: no Nutcracker since, other than Matthew Bourne's reinvention, has come anywhere close for me.

*In the light of more recent events, 'lured' may sound a bit ambivalent. Anyway, he was very nice to me.
Posted by David at 13:15

I am full of envy, no, that's not good - what about I am happy at least to hear such wonderful reports of exactly what we are not getting down here. There is an enormous intellect under that wisteria wig, I'm sure you know, and no, that Dame's output is not pitched at children. Don't we need more laughter, more happy days.

What with the dentist and the eye (I trust no news is good news there) I hope the coming year is relatively intervention-less.

I think the Dame was treading a consummate line last night between child- and adult-pleasing - as was everyone else (the 'presenters' go by the name of 'First Family Entertainment'). Without compromise, I might add, or rather finding a different kind of golden mean, one of the most difficult things in the world. The humour was broad and sometimes Rabelaisian but oddly never coarse. I came out quite struck by the profound effect of laughter - hence the reference to a Wagner-Ring feeling in the review - which is something more than just escapism.

And how kind of you to remember the eye, to whit the sinal fracture, over a year old now if much less in postponed diagnosis; yes, it's only mildly troublesome and no further surgery is necessary.

Will loves the Panto and Dame Edna, I discovered it all thanks to him. So lucky to be in in London to see it all.
Hope you do not have much longer at the dentist. What is it they say, Stiff upper lip!

Stiff lower left jaw, more like, Laurent - and the stiffer (ie the more numb) the better during deep drilling...

I hadn't realised until recently how very British (English?) panto is...Dame Edna's fellow colonials remind me of the fact. But I'm sure bad panto is just awful.

I read Michael Billington's rave review of Dick Whittington and so I'd already resolved to put it in the diary somehow, along with Noises Off, and now yours has stiffened that resolve. (Oh God innuendo is contagious...). I'm glad you enjoyed it so much and it helped to relieve the dental discomfort.

Sadly I am old enough to remember Oliver from the 1960s and did in fact see it then but I was too young to remember where. I think it was probably in the West End so I doubt if La Humphries was in the cast. By chance Luke has just played Mr Brownlow in his school production of Oliver!

Sorry to hear the eye injury is still troublesome even if only mildly.

So British, in fact, that I had to look up the word (Wikipedia does list several former colonies, BTW, but the US isn't mentioned). However, thanks to the edu-mate, who is a Brit, I did see and laugh my way all the way through Noises Off and have laughed through Dame Edna, though not for a while and only on TV.

And speaking of the need for laughter, I hadn't realized how extensive your dental troubles were, so here's to laughter as a much more suitable reason for a jaw to ache, and may the dental work be behind you soon!

I am off to NYC for the holidays and won't be able to be online so much. One of the things I will miss most is checking in Over Here to see what you're up to. I'll look forward even more keenly, then, to catching up when I have a chance to get online.

In the meantime, while you bear no responsibility for this, you did, with this post, inspire my last entry in my own contribution to seasonal silliness.

Have a wonderful holiday season!

Luke must be seen as A Very Dependable Chap to play Mr Brownlow, Howard. Presumably he doubled as workhouse boy...

The colonies ref was a bit of silliness, of course, Sue...but here's a good one which I wish I'd been there to see: Desmond Barritt, wonderful actor, a great dame, I'd imagine, stepping forward after silence greeted a joke: 'Come on, this is panto, not Pinter'.

And seasonal restfulness/exhilaration/what you will to you too.

Poor you with the root-canal... one of those things I absolutely dread. May have to go off and brush my teeth an extra time just in case. Glad that Dame Edna and Co. made up for it.

That English Gig from the Nutcracker was seemingly designed for the party scene in Act 1 - rather than Act 2. Petipa wanted a parallel group of Diverts, with a Chinese Dance, Spanish Dance, Italian Dance, English Dance, Russian trepak and a cancan. The idea was clearly dropped. But as Tchaikovsky never wrote the other dances for Act 1, I guess Lanchbery arranged the surviving sketch as an addendum to the Diverts in Act 2.

Mother Gigogne - one of my absolute favourites, along with the Tumblers' Dance from Tchaik's Snow Maiden - is today's 'door' in my Nutcracker advent calendar.

BTW, I felt it fitting that my 'word verification' for this comment is 'sherb'. I could do with a sherbet fountain right now. But it might bring on that root-canal sooner rather than later...

Mere Gigogne is another one to make us all feel jolly - I'll take up the thorny question of the translation with you Over There: I reckon the word should be 'Cicogne', ie 'stork'. Always been unclear about this.

Equally exhilarating as hyper-ballet, I think, is Smetana's Dance of the Comedians. Last week my two-year-old goddaughter whirred around like a catherine wheel to it.

If only root canal could be avoided by simple brushing and flossing...it's me gums (I grow old).

A last peek in over at PD leads me to write here: no question who's who in our house, and so, from hedgehog to hedgehog, a happy holiday to you!

Thank you for the comments... have expanded on the translation. Petipa can be irritatingly vague!