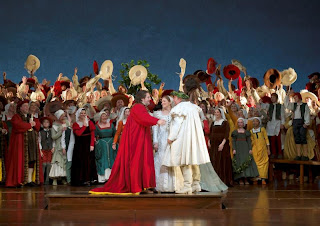 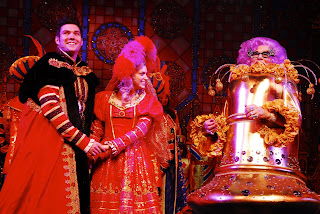 Very well, Hans Sachs and Fairy Edna may have nothing else in common, but they do both help an outsider and a merchant's daughter in difficulties towards a wedding. And to be honest, the panto in Wimbledon spoke more often to my depths - or my shallows, though what's as profound as Homeric laughter? - than the Royal Opera's Meistersinger revival (the final scene of which is pictured above by Clive Barda). There were passing pleasures, all the same, in the second of the two comedies which rounded off a year rich in events.

I tried to unpluck the best from its varied tapestry in my Arts Desk 2011 choice, but even then I found I'd missed a few (how could I not have squeezed in Kazushi Ono's CBSO Mahler Resurrection Symphony?) I needn't repeat the results here except for the crème de la crème: in terms of Gesamtkunstwerk, it was a tough choice between Christopher Alden's production of Britten's A Midsummer Night's Dream and Sasha Regan's riotous but also very moving all male G&S Iolanthe, full of attractive strangers and responding well to Wilton's Music Hall magic (and there's another special event I left out - Alina Ibragimova's recital-happening at Wilton's in colloboration with the Brothers Quay. I think Sussie Ahlburg's photo was taken at the concert's first, Manchester venue, but never mind). 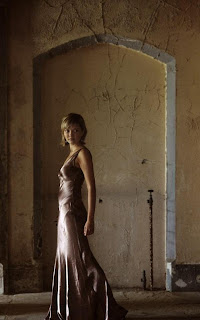 Thought I ought to do a quick coast back over the 2011 blog, too, for other signifiers. Nothing new about the most entertaining book I read all year, Simon Winder's Germania - others rail against its flippancy, but he makes no bones about it - or the most revelatory author, Halldor Laxness, though after Under the Glacier and Independent People, I'm getting stuck with the disconsolate whimsy of World Light. Nothing new either about all seven series of The West Wing, after which everything on telly comes across as flat and unprofitable (dipping into BBC drama, it always seems well acted but poorly scripted. And could you believe the direness of Ab Fab? I couldn't). 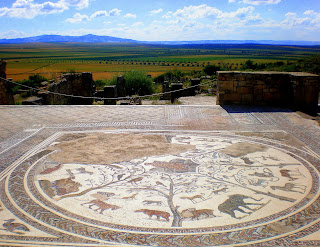 The places I fell in love with, either for the first time or again, are too numerous to mention, but I'll try - from Darwin's Down House, the treasures within Cologne's churches and the unpickled German small-town perfection of Göttingen to the wilds of Connemara and the Burren in Ireland, the monastery of Tioumliline, the medina of Meknes and the beautifully-sited Roman town of Volubilis (pictured above again, why not? )in Morocco and - of course, the highlight - the top of Iceland's Snæfellsjökull and its lavafields/slopes running down to a blue, blue sea. Of course the whole place would tell a different story in wind and rain, but that's not how we saw it. 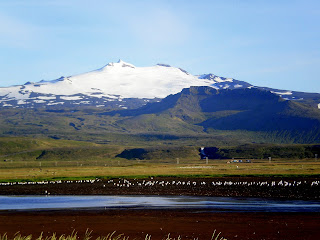 Here's hoping that we do head back to Iceland's south coast in 2012. And may your year be as adventurous as you want it to be.
Posted by David at 19:47

Dearest David (and Diplomate) one of the joys of the past year has been to experience your travels and take part - howbeit vicariously - in your musical adventures. As always caro you make things come alive with your words and photos but most of all with your absolute joy in what you see and do.

Wishing you both all good things in the coming year.
baci
Will, Laurent and the HFH

Much appreciated, Will. I've said it before, but I do love the parallel universes of blogs - in our dreary, damp end of year weather we actually envy you all that Ottawan snow.

I've written this directly on Arts Desk & do hope it "took," but in case not: "Since I discovered David Nice's blog earlier this year, I have followed it keenly, including the Arts Desk links. As a result, I've been introduced to musical treasure after treasure. I would like to confer on David Nice, if I may be so allowed, the 2011 "Passionate Engagement" award, for his leading readers, in such vibrant prose, to so many magical musical adventures. I will note one, though there are many: the Luonnotar Nice mentions. I caught it quickly enough, thanks to Nice, to hear the performance on the internet via BBC3. I will never forget it. I didn't know the piece, nor did I know any (but for Finlandia), of Sibelius's symphonic poems. I am now the proud owner of every one."

A footnote on Turnage: I want you to know I've by no means forgotten your mentions of this (and particularly, vis-a-vis my own current preoccupation Over There, the, as you named them, "acid waltzes"). I've got an eye out for the music--my challenge is to get the music without having to think about the subject matter, which I seem not to be able to get past.

A footnote on the DVD of Mahler's Ninth by Abbado and company: I will treasure this for all my days. Truly. I've even got the edu-mate to agree that the music is, yes, beautiful. What I haven't yet convinced her of is that there is something to watch! To me, though, there is everything to watch. To be right inside that orchestra, to see Abbado's gestures, his face.

Well, the point is, thank you so, so much. (And, BTW, I think it might be the case, though I'm not sure, that the first post I read of yours was one of yours on Darwin.)

Happy endings, and happy beginnings, too. Here's to 2012!

Dear David and Monsieur Diplo-Mate, Thank you for your blog it always make for interesting reading and I always learn something, maybe I should go back to school. I know that your speaking of the Panto has Will filling out passport application forms. You will most probably see us in the UK this 2012. Maybe sooner than you think. We always think of you both fondly and I still have wonderful memories of the restaurant we all went to after the Barbican concert. I was impressed with the place simply because of its honesty and presentation.
So all the best to you both and much love in 2012.
Laurent

As the first entry in 2012 I am seizing the opportunity to wish David A Very Happy New Year and to thank him for so much pleasure in 2011. He has a genius for this genre and we all benefit from it. Wonderful

And New Year greetings in return to some of the old (and relatively new) faithful. Will and Laurent proved that net friends can become real friends; most real friends of longer standing don't post comments, but DD is one who does; Sue, how's that for positive as ever? You'd be too good to be true if your writing were less rooted and real. Deepest thanks.

My dear David, my resolution for 2012 is to find a voice. You are an inspiration, both in what you say and how well you write. Your blog is an absolute delight and the photographs are a sublime addition. I have been thinking about you and the Dip and your kindness and capacity for friendship. What I love about your blog is the range of what you listen to and look at and above all the new things it brings to me. Some of your mastery of music is above my intellectual pay grade (I fear I may be stuck as a Sam and Dave fan forever) but your comments on TV are right up my street. About the direness of Ab Fab, I couldn't agree more. You could see on their faces the desperation of the cast as they realised just how mean and nasty and unfunny a turkey they have been persuaded to revive.
I wish you both a lovely year and hope to share some of it with you.

I'm a huge Laxness fan but I will admit that World Light is a tough go. What I can gather from several Icelandic readers is that the work is very idiomatic and doesn't translate as well. A few of us Laxness fanatics have put up a site devoted to the English translations of Laxness:

We avoided AbFab fearing it would not live up to its past glory, but much enjoyed Great Expectations. And another of your previous enthusiasms I stumbled on in Oxfam at the Angel (a surprisingly good source of interesting music and film) is now playing - a double cd of Martinu's 4th Symphony, Memorial to Lidice and Concertos.

After a round of seasonal LP spinning (Britten's Carols, Lieutenant Kije/Love for 3 Oranges Suite, not to mention Magical Mystery Tour!) I was left with a strong desire for more Prokofiev, now combined with a burgeoning Martinu interest.

So many thanks for all your reviews and recommendations, and fascinating travel reports, as well as all the very best wishes for 2012!

I am now on the hunt for a birthday Meistersingers set for herself which Amazon tells me is between an old 1968 Goodall recording and a more modern Solti. None with Terfel as yet I far as can see.

Is that the lovely Liz H? Greetings to Brussels if so, and more thanks for kind words.

Prof Batty, I looked at and admired your website when you last pointed me in that direction - a marvellous resource, thank you.

Howard, I've just caught up with the Great Expectations and, though I couldn't fault the look of it nor Gillian Anderson's take on Miss H, I hated the scripted extra banalities, the removal of the Wemmick-in-Walworth scenes and the fudging of the later stages (Orlick's original scene included).

Meistersinger - those two can only be there for the sake of great Norm. Both have major shortcomings
(and the old ENO one sounds awful). Trouble is, there's no overall top-cast version. I like Sawallisch's, with Heppner on all-too-brief top form.

I'm late on this, but best wishes for a great, healthy and happy 2012. I always find new and wonderful things about the places you go and appreciate your picking out the less touristy and far more meaningful things that intrigue you and then me. It's always a rich experience here. Thank you!

Dear David,
I agree with your remarks about AbFab; I have never found that thing at all amusing. Do investigate the HBO Treme, very sad in parts, but well-written and most engaging. The two series of In Treatment, with the excellent Irish actor Gabriel Byrne as an analyst, with both his own clients and his own analyst, is also well worth investigating. It is developed from the Israeli series Be'Tipul
John Graham
have any of us EdiUniv alumni died yet, so far as you know? It is gently but inexorably heading towards that time, you know.