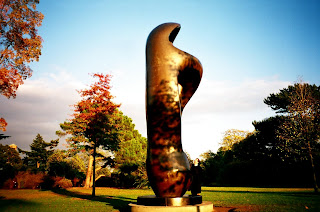 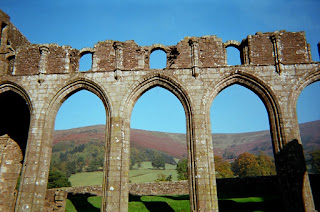 While Sophie (see below) sizzles back in Mali, Jeremy and I have been enjoying autumnal pleasures closer to home. The lack of cheap half-term flights to Italy, where we like to go hiking twice a year, proved a blessing in disguise - and coincidentally does wonders for our carbon footprint, since we took trains to Herefordshire and Essex, admittedly only to be ferried around to our walking-places by our hosts in the unecological motor.

Before that, we caught one of those still, uncanny autumn days at Kew, where the Henry Moores stand monolithic in the big broad avenues. The second photo was taken on a disposable camera as I'd forgotten to carry my Canon westwards - it's a bit fuzzy but certainly better than nothing. The ruins are a hidden treasure that many friends seem to know about – Llanthony Priory in the beautiful Vale of Ewyas below the Black Mountains and our current stretch of the Offa’s Dyke path. Along that we walked with Stephen Johnson (also mentioned below), musing on contemporary composers’ obsession with process at the expense of substance, and Stephen positing the interesting idea that all such should be conscious of the ‘hook’ which pop writers use to entice punters: what’s wrong with that?

Process turned out to be just about all in Colin Matthews’ newish piece launching the latest BBCSO concert, which we caught back in London for a day on Friday: well orchestrated (except in the typically unimaginative use of the 'tongs and the bones') but nebulous. Debussy, the avowed model, isn’t nearly as wispy: his ‘hooks’, however evanescent, have real power. The Britten Cello Symphony has been running over and over in my head since the performance ‘starring’ Alban Gerhardt – a cool customer compared to dedicatee Slava Rostropovich, but it was wonderful to hear him forcing the melody through in the cadenza. Maestro for the night John Adams then celebrated turning sixty with the transcendental-cum-violent choruses from The Death of Klinghoffer. C Matthews could do with some of that directness, though I appreciate his aims are different.
Posted by David at 13:50