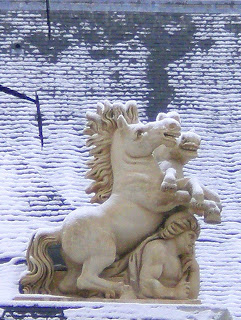 A horse, a horse, my kingdom for a horse, like the one above on Louis XIV's Invalides roof but with wings, which might have helped to get us back from the continent. In fact our travel saga could have been a lot worse, given the current meltdown. We had the comfort of our lovely friend Laurence's flat in Paris's 15th district and the company of her and husband Bertrand on several fun expeditions and at table. Sure, we had one Air France flight cancelled with no more information than 'thank you for your understanding', no-one to be spoken with over the phone; and so we trudged on the day after the cancellation to AF's reasonably plush terminus near Les Invalides, waited two hours, got rebooked on another flight, had that cancelled on us too a couple of hours later, decided to cut our losses since Heathrow was in no end of chaos and booked a coach from Gallieni to Victoria.

It took us over ten hours rather than the (hardly expected) six, including personnel-less hold up at the Eurotunnel, where only signs told us of a delay and promised (and failed to provide) further information. All this impersonality, plus two long sessions at two different passport huts, made me a bit uneasy as I was deep in Hannah Arendt's devastatingly brilliant Eichmann in Jerusalem.

Yet the mostly good-humoured company on the coach, everyone with his or her travel horror story, made it almost worthwhile. The stars were three delightful Sri Lankan/English girls travelling with their amma back to Harrow from an uncle's funeral outside Paris. How inquisitive they were, and how bright, and I suppose I could have analysed 'Twinkle, twinkle, little star' as one of them suggested when I told them I wrote about music and they tried to grasp that peculiar concept. Wagner, of course, meant the big man who couldn't sing on X Factor; but the two older girls were on Grades 2 and 4 piano respectively, and one of them enthused about the Song of Erin she was playing, which she thought was about a bird until her teacher told her all about Ireland. They were fascinated by our Versailles theatre experience so I managed to give them a postcard of the Galerie des Glaces. More about that another day.

On Monday morning, J nobly stuck it out in not too much discomfort at the Air France terminal while I walked through the snowy plains on the Rive Gauche down to Les Invalides, one of the few sights of Paris I've never previously been anywhere near. 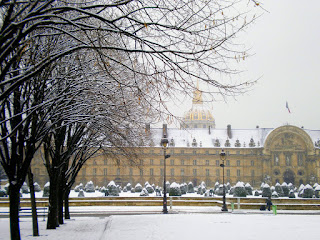 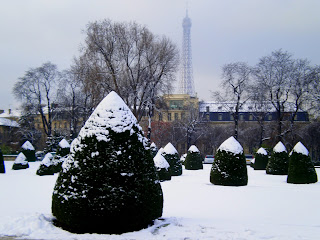 I guess all I'd really been curious about was Napoleon's tomb in the Eglise du Dome, available to see only on a ticket which also included admission to the huge collections of the Musee de l'armee; but the whole experience was, as it turned out, a neat complement to Versailles. 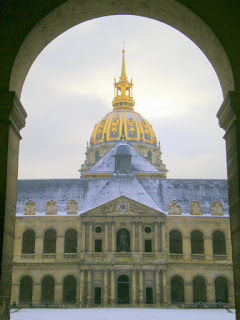 This is merely the largest of fifteen courtyards, and Laurence told us it had sad associations for her as it's always the place where officials assemble for the funerals of French soldiers killed in action abroad. 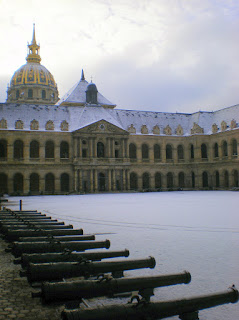 On a comparable if somewhat more dour scale to Versailles, the Hopital des Invalides was founded in 1671 as a home for Louis XIV's wounded soldiers and designed by Liberal Bruant, with help from his pupil Jules Hardouin Mansart on the chapel of Saint-Louis des Invalides. Shortly after its completion, Louis commissioned Mansart to construct a separate royal chapel, the Église du Dôme so spectacularly modelled on St Peter's Rome. Finished in 1708, it's now home to Napoleon's tomb, erected here in 1861 with wacky, hideously toadying bas-reliefs in the crypt arcades surrounding it. 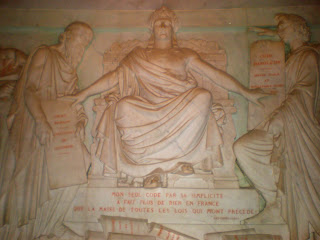 Maybe the one above is the least debateable in its sycophancy, since the Code Napoleon was probably his best legacy. 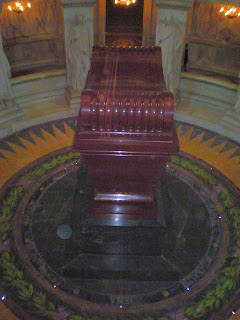 Napoleon's ashes were actually returned from St Helena in 1840, and they may not be his: did the British poison him? Conspiracy theories abound.

All this, via the Tolstoy/Prokofiev War and Peace was tying in neatly with the two previous exhibitions we'd seen, on Russian romantic painting (at the Musee de la vie romantique, with distinguished loans from the Tretyakov) and on Lenin, Stalin and Russian music at the Centre de la musique. They're part of Paris's year long Russian spectacular, nearly at an end now.

More on both anon, I hope, but I'd like to sing a little hymn of praise to the smaller exhibition at Les Invalides on the Russian imperial guard, 'Au service des Tsars'. Like the rest of the exhibitions in the Musee de l'armee, the memory is selective, and 1812 was pretty much glossed over (the name 'Kutuzov' didn't even appear). But here, too, there were treasures, all from the Hermitage. I'd never seen the tunic of the Preobrazhensky regiment worn by Peter the Great at the Battle of Poltava 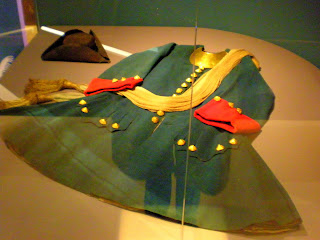 and I was delighted to see the portrait of Catherine on horseback by Vigilius Eriksen (detail only). 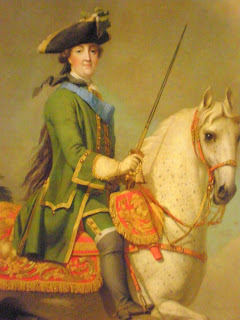 As the army fell into its flatulent decadence, it was good to see just one touch of irony in a grand canvas by Boris Kustodiev. He lived on until 1927, celebrating the sometimes fruitful turbulence of the post-revolutionary period, as we were able to see in the pictures for the Lenin/Stalin exhibition, but like Repin he also caught some of the pomposity of Nicholas II's men. This is a detail from Kustodiev's picture of the Finlandsky regiment's procession in front of Tsar Nicholas on 12 December 1905. 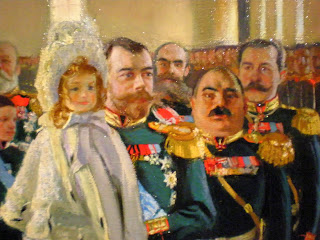 And that was all I had time for before I went back to collect my long-suffering queuer. We returned to Les Invalides after a deservedly splendid lunch in a restaurant just below the terminus which turned out to be a favoured haunt of politicians, Chez Francoise, hugely recommended and not by any means exorbitant. For the afternoon tranche of the enormous Invalides exhibits, I left J to discover Napoleon's tomb for himself and to spend more time than I did in the First and Second World War wing, and went to look at the renaissance armoury. It boasts superb royal armour from Francois I onward, as well as elaborately grotesque helmets featuring chimeras - only connect with our previous viewing of Lully's Bellorophon at Versailles - and other monsters. I rather sped through the Louis XIV-Napoleon III galleries, but I could hardly deny that they were, like so much else in Paris, a marvel of stylish exhibiting. Sadly the Ingres portrait of Napoleon enthroned was out on loan, but I rather liked the anti-heroic, post-factum Delaroche picture of the defeated, sallow, baggy-eyed emperor resigning at Fontainebleau (this image courtesy of Wikimedia). 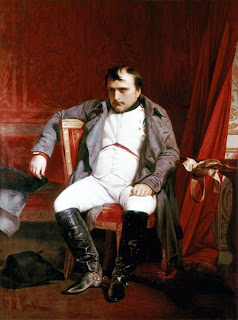 That took us up to closing time on an extra day we hadn't expected in Paris. Of course I never got to Finland to see Korngold's Die Tote Stadt as planned - needless to say, Helsinki Airport was functioning as well as it always does with an infinitely greater amount of snow - but I was glad not to have to face the greater problems of getting back from there.
Posted by David at 15:33

You might have mentioned that the Lully opera and the picture of the defeated Napoleon were connected. In 1815 the emperor surrendered to the captain of HMS Bellerophon which carried him to England.

It is said in Cambridge that an aged don reported that as a freshman in the 19th century he had met a then aged don who had seen Napoleon on the deck of the Belleraphon when wheeled in his perambulator by his nurse onto the quay at Plymouth. "But" he added in his report of the sighting "one could see at a glance that he was not a university man"

I would indeed, Sir David, had my knowledge of history been as fine-tuned as yours. So thank you for another excellent connection.

Anyway, I'm sure you're glad we returned safe if not entirely sound.