Striking out from Stykkishólmur 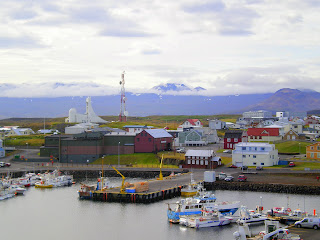 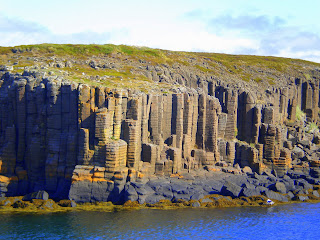 Not much independent enterprise on the morning of our second full day in Iceland, I know, but 'naturewatch' was too enticing a compound to ignore. After the wonderful weather of our exhilarating trip around Snæfellsjökull, there was still blue in the sky, but not enough to risk a whole day on Flatey, the small, fair and flat island (which of course is how it translates) recommended for r&r. The alternative was a two hour plus boat trip around some of the thousands of skerries and islets in Breiðafjörður. That would allow us time, given the many hours of daylight, to head out for a hike up the caldera of Eldborg in the late afternoon (which we did, and I was glad for that - more anon).

Stykkishólmur is tiny, more a harbour-village than a town, and it grows on you, despite the usual Icelandic mishmash of buildings small and humble alongside big and ugly. Settled early, its area described in the Erbyggja Saga, Stykkishólmur came into its own in the 19th century, and there are a few pretty little houses from that time. 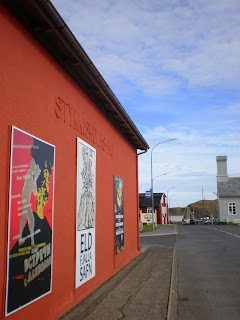 The only one of several museums we explored was the already-praised Eldfjallasafn housing the substantial art and rock collections of locally born, internationally famous vulcanologist Haraldur Sigurðsson. He wasn't there, as he often is, during the visit, but the curator was very friendly and I'd recommend booking a trip with Sigurðsson around Snæfellsjökull if you happen to coincide. The museum's table of rocks from Snæfellsnes, with several types of obsidian and jasper, gave us a good sense of the variety. 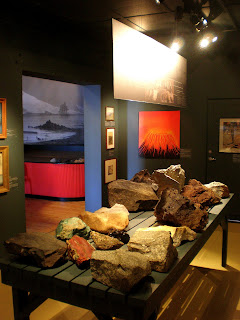 You eat well in the authentic surroundings of Nafeyrastofa, just down the road towards the harbour next to the church, where I twice enjoyed a plate of mussels, guillemot breast, twice-smoked lamb (tastes like petrol smells, which believe it or not I like) and barley, though you can strike gold with the much plainer - though hardly cheaper - Fimm Fiskar, where I tasted the best, freshest haddock ever.

More surprising comestibles were to come as a highlight of the boat trip, which we shared with a voluble, vivacious Frisian lady and a party of Americans so thickly shell-suited that you'd have thought they were following in Buzz Aldrin's footsteps when he came to try out the nearest thing to a moonwalk in northern Iceland.

Birds were promised, and did not fail us. Forgive me if I didn't absorb the names of the many islets around which we floated, to the sublime indifference of the avian inhabitants, but they appear here mostly in chronological order (and to add to the curiosity, I do remember that on one of them was once located Iceland's first printing press). Fulmars and kittiwakes populated our first destination 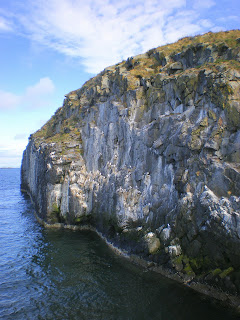 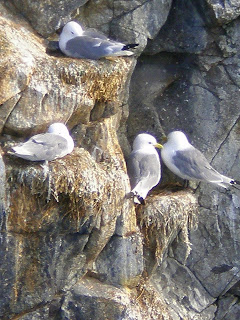 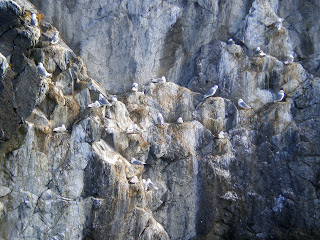 while puffins, never presenting themselves to us from the rockface, were regularly to be seen floating in groups on the waters. This is as close as I got, and you can only just about see them if you click to enlarge, but we were lucky to see them at all because most have left by mid-August. 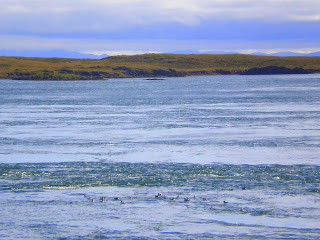 Shags stood in noble profile or flapped around on islets and promontories. 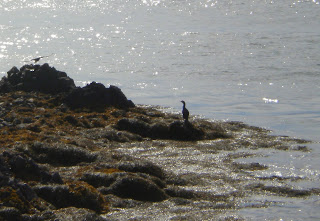 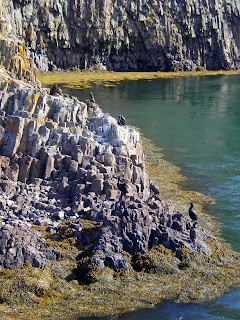 We were also promised spectacular rock formations, which did not disappoint. Who can believe these basalt pillars are not man-made? You'd have thought we'd reached Manhattan. 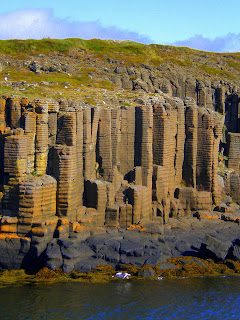 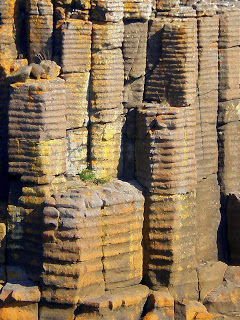 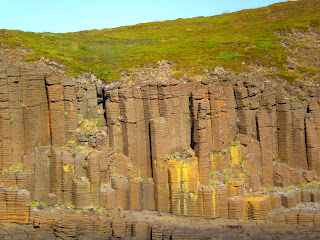 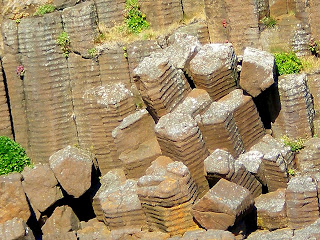 Even here the birdlife did its stuff against the spectacular backdrop, including a flotilla of female eider-ducks. 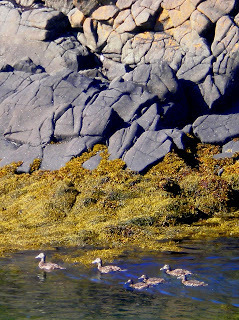 One of the few interesting facts Verne digs out in Journey to the Centre of the Earth is how the female eider feathers her nest with down plucked from her own breast. The eider trader robs the nest, the duck repeats the action until she has no down left. Whereupon the drake plucks his own breast with feathers that are of no use to man, who leaves the duck to lay her eggs 'in the spoils of her mate'. Whether this is any more accurate than most of our Frenchman's garbled facts, I don't know, but it's a good story.

As if we weren't already sated with wonders, the nice boatman then dredged up creatures from the seabed 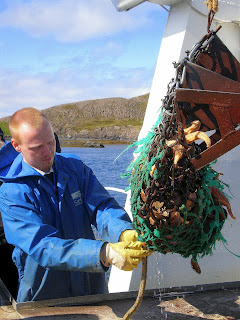 and spread them on a table for our delectation and delight. 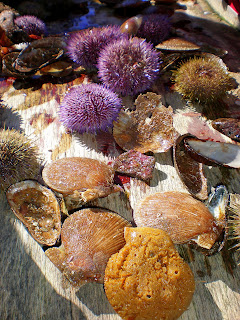 We duly took our share of the clams and scallops 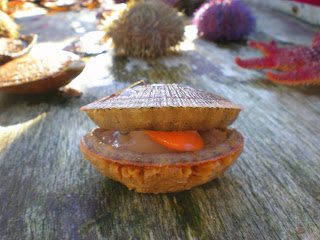 and urchins (very sweet and, I thought, delicious) 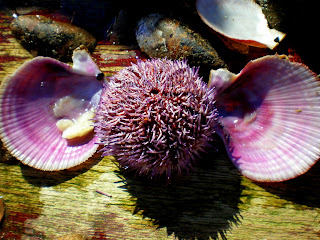 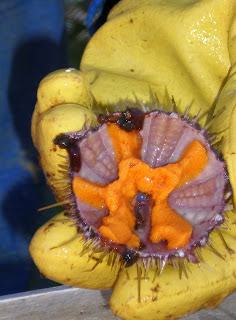 while ogling the crabs and starfish before throwing them back where they came from. 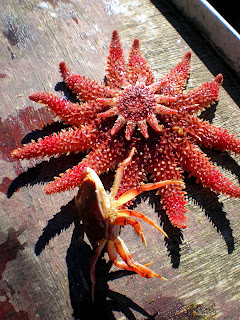 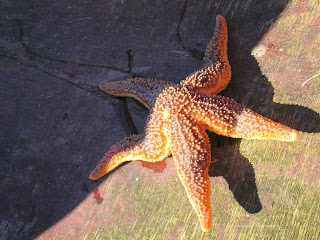 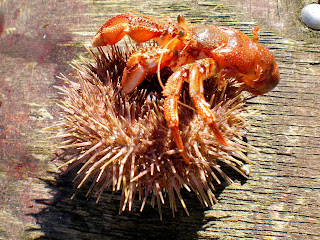 And then the boat did a bit of comestible retail for those who wanted it before we came back into Stykkishólmur in time to augment our lunch.

We had a jolly time there, not least in the company of our newfound Dutch - or should I say Frisian - friend, who was on her 10th trip to a country and a people she adores. And we slept comfortably in the simple, friendly Breiðafjörður Hotel, though I'd say it was overpriced even by Icelandic standards - probably because it has a virtual monopoly in this small and thankfully undeveloped place. The staff in the hotel and restaurants, by the way, were mostly very blonde and quirky teenage girls. When the diplo-mate joked with our hostess about that not being allowed if Iceland joined the EU - which she emphatically didn't want - she said, 'but that's nothing: our street sweepers in winter are kids of 11 or 12'. Well, no harm done in a small community, I guess. 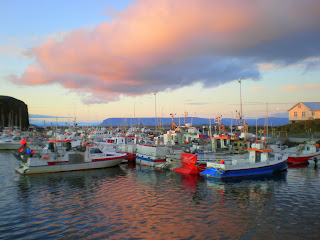 On our last night I had to keep my fellow-eaters waiting while I dashed back to catch the late evening light on Sugandisey, the amazing little island connected now to Stykkishólmur and protecting it from the worst excesses of Breiðafjörður weather. 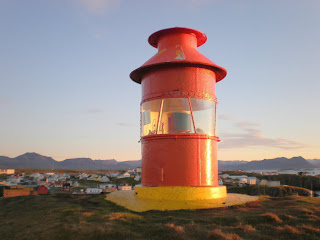 And so, straight into the sunset: 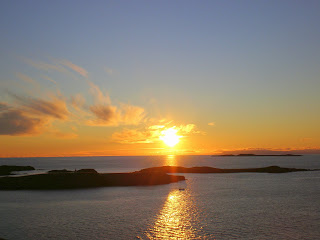 A poetic way to take leave of this welcoming and haunting little place. 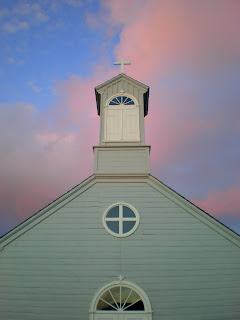 What GLORIOUS images... thank you.

Hope you two will go too: take a look at the Iceland Symphony Orchestra's 2011-12 schedule (with conductors like Rozhdestvensky, Ashkenazy, Volkov doing Mahler 7 and Vanska taking on Mahler 6) and you'll also hear one of the best acoustics in the world in one of the most congenial town-cities.

I've now become an Iceland zealot, like Hilary Finch, who I believe has gone some 40 times. Hopefully the photos, where half the time all one had to do was point the camera and wonders would be apparent, will be a major part of my missionary zeal.

So many beautiful photographs! I had no idea about Iceland, I now see. The rock formations are indeed spectacular. The bird life is very similar to northern Maine, it seems--though I don't think you would catch anyone eating guillemot breast over here.

David - you have been captured by Northen-ness, like C S Lewis (and my late mother). My only qualification to that observation is that you seem to have been captured also by other climes - North Africa, and elsewhere. You have a rather special talent for - well, "I am a camera" perhaps - but capturing the spirit of place as well as the images. Your fresh eye seems to have survived. I have to confess to a kind of world-weariness, so that once I have seen a place I do not need to see it again.

here a sign of life from the Frisian lady, you guys met in Stykkishòlmur...I totally enjoyed my time with you guys and the meals we shared...I had a the most wonderfull time in Iceland and you were part of that.. Tige tank( thanks in Frisian);)
Teatsche

Wonderful to hear from you, Teatsche, I was going to email, honest...but first I needed time to digest your sites and photos. Hope you approve some of the above - the crustaceans look good, at any rate.

Look further up and you'll see we did indeed get to Hraunfossar. And on theartsdesk there's a report on our wonderful time in Reykjavik - you'll see that I got some quite good photos there myself. It was not an anticlimax, praise be.

Hi David,
Good to hear from you and that you and Jeremy had a great time too..
Can you give me an e-mailadres to send the pictures I made of you guys to? And so you still want soem pictures of the Harpa music-centre?
Your pictures look great. I read your blog about Iceland and with great pleasure...It is a very nice report of your trip to Iceland and it is like a written version of my photo's.As I said , I really enjoyed the time I spend with you and Jeremy.
Teatsche