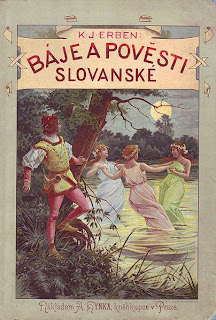 Apparently every Czech schoolchild knows (or used to) at least partly by heart the verse fairy-tales of Karel Erben, just as every Russian schoolchild knows (or used to) Pushkin's Tale of Tsar Saltan and Golden Cockerel. We don't, and English translations are extremely hard to find, so what Dvorak was trying so uniquely to do in his symphonic poems of the 1890s may be even more liable to misunderstanding.

That, and what I construe to be the dead hand of the prescriptive 1950s, decreeing that all music which tells a story is suspect and that therefore any but the most established tone-poems are doomed to extinction, may account for why I've never heard The Golden Spinning Wheel and its companion pieces, no less wonderful in orchestration and invention (The Wood Dove, The Noonday Witch and The Water-Sprite), in the concert-hall. In fact it's a marvellous couple of days for hearing great music live for the first time; last night I revelled in the LSO's championship of Nielsen's Flute Concerto and Zemlinsky's The Mermaid, and wrote about that enterprising event on The Arts Desk.

So tonight I'm going to hear how The Golden Spinning Wheel pans out in live performance, and our BBCSO class is actually in quite a lather about a fabulous Czech programme which only Jiri Belohlavek could mastermind. More of the rest anon, but a word or two about The Golden Spinning Wheel. What I'm hoping is that Belohlavek will give an introduction with musical pointers, because unless you know the story you could well be lost in its nearly half-hour span*. And the subtlety of the technique will pass all of us who don't know Erben's poetry by. For Dvorak has set the text to music with the words merely implied - a pioneering idea which may have encouraged Janacek in his search for naturalistic speech-melodies. I don't know of how much of the piece this is true, but I enjoyed listening to my pal Stephen Johnson's eloquent BBC Radio 3 Discovering Music on the work, where he points out that the very first hunting-theme sets the opening two lines ('Okolo lesa pole lan,/hoj jede, jede a lesa pan'). 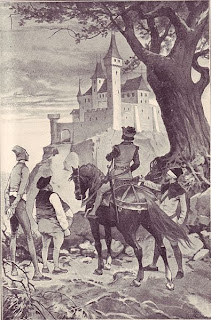 This is music that tells a story at every point, and while the invention is superlative throughout, if we don't know it, we'll be lost. It's true there's a kind of rondo form, with a clutch of forest rides as the link, but the repetitions will certainly be puzzling without the story. I'm delighted that there's a complete film of Tomas Netopil conducting an Italian orchestra (it doesn't say which one) so that I can give the pointers in the shape of a few timings.

No trouble identifying the beginning: a king riding through the forest. He stops at a cottage to ask for a drink of water and falls instantly in love with the maiden Dornicka, who brings him the water and returns to her spinning wheel. Her music is as lovely in the heroine's in that great opera Dvorak had yet to write, Rusalka, and uniquely scored (cor anglais, four solo second violins and one first, before clarinets proceed with the spinning - 2'28 in the film). 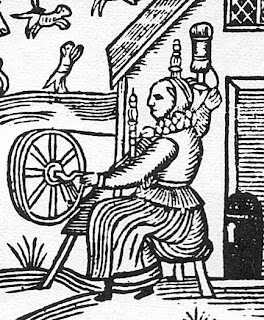 The King has to ride back later and ask Dornicka's stepmother for her hand in marriage. We can tell she's a wicked old bag (the oboe pops the request, clarinets and bassoons cackle back - 6'31).

Sure enough, the stepmother and her daughter, riding with Dornicka through the forest (8'47), murder her (9'58), cutting off her arms and feet, plucking out her eyes and for some obscure reason taking the body parts to the palace, where the 'false Dornicka' - see Odette/Odile - marries the King. He goes off to war. Meanwhile, a mysterious old man finds Dornicka's torso in the forest (brass chorale, 15'16) and sends a boy to the palace to ask for the body parts (innocent flute, 15'55). This is where you have to know why the process is repeated three times: the boy gives a golden spinning wheel in exchange for the feet, a golden distaff for the hands and a golden spindle for the eyes. The old man restores Dornicka to life. 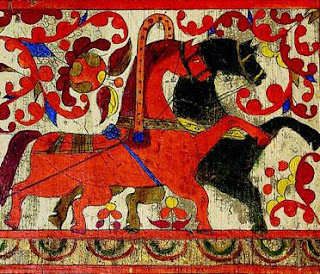 The King returns from the wars, his wife plies the golden spinning wheel - and it creaks out the awful truth (22'20 - shades of Mahler's Das klagende Lied, where a flute made out of a murdered youth's bones reveals a fratricide). The King finds Dornicka in the forest and they live happily ever after. Somehow Dvorak passes over the wicked women's being torn to pieces by wolves in hot pursuit, but he needs to get to the end in as lush and jubilant a manner as possible. Tonight's concert will conclude with another, earthier tale - Janacek's Taras Bulba - which is going to connect neatly with a much later work by Martinu, his Rhapsody Concerto for viola and orchestra. Like so many of the exile's great later works composed in America, Martinu's modest little masterpiece harps on the cadence we know as the 'Julietta chords', from their emancipating role in that fantastical masterpiece of an opera (which I've just heard Richard Jones will be staging for ENO next season, hurrah).

Did Martinu mean by the chords to evoke his lost love, the talented composer Vitezslava Kapralova, who died at the tragically young age of 25 in 1940? We'll probably never know; Martinu had to cover his tracks even for his biographer, Milos Safranek, so as - I guess - not to further wound the feelings of his French wife. But the fact is that the 'Julietta chords' first turn up at the end of Taras Bulba. So they could equally well signify the rapture of Czech liberation, and of what his homeland meant to Martinu.

At any rate most of the later works are shot through with significant quotations, or near-quotations, and I spotted another in the second movement of the Rhapsody-Concerto: a poignant recollection of the lyrical second theme in the first movement of Dvorak's American Quartet. For some strange reason a good performance of that isn't on YouTube, only the first movement in the magnificent interpretation of Josef Suk with the Czech Philharmonic Orchestra conducted by Neumann. The Julietta chords are all over this movement, too, starting seconds into the piece.

The second movement is the more dynamic and unpredictable of the two; amazing the use Martinu makes of rattling side-drum in postponing the ultimate peace, though that does come. It's a good time to remember all those geniuses, as well as all the rest of suffering humanity, displaced by war. Given that Remembrance Day is tomorrow, I'll leave you with a recording of perhaps Martinu's best-known orchestral work, the memorial to the Czechs massacred by the Nazis in Lidice.

*He didn't. Instead he cut the work by a third, leaving my students puzzled as to what was going on. All this now detailed in the Arts Desk review.
Posted by David at 11:30

Yet another treasure trove from you, here!

Even though I’ve long known it’s so, I’m repeatedly taken aback by how bloody fairy tales can be. Hats off to Dvorak for tucking in as much lovely melody in this piece as he did. I do find the idea of telling a story in music only quite appealing. I suppose this is bound to be the case when an early childhood listening experience was Prokofiev’s Peter and the Wolf (though, in that case, Eleanor Roosevelt read the story—still, I was entranced by the idea that each character had a musical theme—and instrument(s)!). When in high school, I tried to pass it on a bit. While babysitting for a large brood across the street in our neighborhood, I sat two of the children down and played “The Red Shoes,” pointing out the story as I went along (who knows if I got it right, but I decided what was what based on what I remembered from the film, which I loved). Years later, while one of the two didn’t remember a thing about it, the other remembered it with fond delight.

I spoke too soon above. Delighted you like it. Responses at the concert were very mixed (but then he cut it so badly it made no sense - the one you've watched is absolutely complete).

Like you, I came from a more literary/dramatic angle and love music that tells a story - the Darmstadt bloodlessness never get to me...

Sorry, but I must confess (heresy!) that The Red Shoes is a film I can't stand - though I came to it late. I do love the Olympia act of Powell and Pressburger's Tales of Hoffmann, and some of their other films - Colonel Blimp is a masterpiece - but not that one.