Peddler’s tales for the low-gear reader 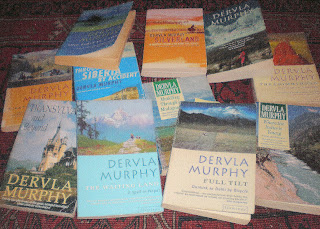 Dauntless Dervla Murphy has cycled what were, at her various times of writing, the undiscovered corners of the world – when she could, that is, because from the harshest winter on record which dogs the quickly-told early stages of her first journey, Full Tilt, to the incapacities and robbery which cut short her bike rides in a much later, train-dominated jaunt around Siberia, circumstances have not always allowed. She’s also trekked with daughter Rachel – when aged five, to southern India, when six, to Baltistan – as well as enlisted several mules or donkeys for company and baggage, treated with love but subject to the same erratic diet as well as the perilous ascents and descents la Murphy herself favours.

These are the only books I’ve found easy to read during my several sojourns in the underworld* – and to re-read with pleasure this time round, in most cases; new to the trusty library this year were Cameroon with Egbert, Transylvania and Beyond and Through the Embers of Chaos (a tough, singular take on the post-fractured Balkans) . It doesn’t worry me that our Dervla has become ever more wild with her punches at What The West Calls Progress. Unscientific she may be; language is often a barrier; but her unique ability to rough it on hard floors among bedbugs and rats wherever she goes opens her to other ways of life, and endears her to local people. She follows her instincts, which are usually right; shrugs off robberies and broken bones; and, in the later books, simply talks to the casualties of war and AIDS.

Though the personal tone is always companionable, the books are often as good – I suspect – as the editor and proofreader have made them. Which doesn’t stop me loving the rougher-hewn tomes, like Six Feet in the Andes. But the little masterpiece is surely Where the Indus is Young – for the pith of its encounters, unsentimentally recorded, with the Balts and others, for the guileless observations of young Rachel and above all for the sheer bloody-mindedness of a mother taking her daughter trekking with a mule from the dead of winter up to avalanche time as the spring thaw begins. 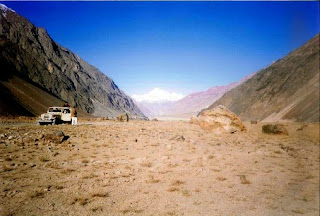 Something of the descriptions of the river and mountain landscape both here and especially in the later stages of Full Tilt, when Dervla heads out of Gilgit in several directions, brings back strong memories of our much less doughty Karakoram journey from Chitral to Gilgit by jeep (majestic Tirich Mir in the distance above); all we can claim in common is dossing down on local floors with mountain folk en route, waking to scenes like this. 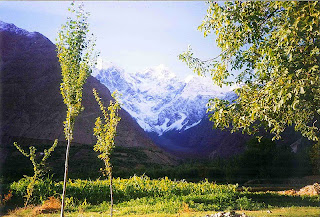 When Dervla waxes lyrical, as she often does, about the beauty of high solitude, I can understand at least a little of what she means. And I guess the places we visited on the earlier stages of our trip, which took us up several valleys inhabited by different tribes under the aegis of the Kalash Environmental Protection Agency, aka another extraordinary woman, Maureen Lines, will now have slipped back post-insurgency into untouristed obscurity. Anyway, all hail to the great Murphy for providing an invalid’s solace. 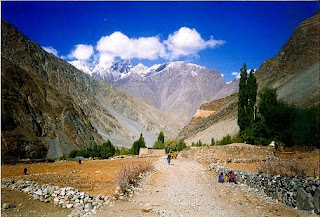 And in another all too recent reminder that other places in the world once accessible to the tourist can so quickly become out of bounds, I’ve been following with alarm our dear Sophie’s narrative from her Hotel Djenne Djenno in Mali. When we were there it wasn’t exactly easy to get to Timbuktu 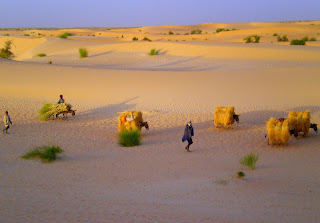 and back down the river Niger. Now not only is it impossible, as I hazarded before Christmas, to head north to what seems likely to become known as Azawad, but the trouble is very much on Djenne’s doorstep. With only the sketchiest of outlines to be gleaned from the international press, Sophie is perhaps the best port of call for a woefully under-reported crisis that’s worsening by the day.

*normal service will be resumed as soon as possible.
Posted by David at 19:39

O frabjous day! To see you here again, and, indeed, may normal service return soon in all respects. I'm glad you had a little trove of books to keep you company, and may just have to try out one myself. (My current reading, by the way, is Stephan Zweig's The World of Yesterday, and I'm enjoying that immensely.)

I was actually just on point of writing you (really, within the last hour!), to send on another bowl of cyber-chicken soup and my continuing well wishes, so what a joy to find you there, at least tentatively emerging!

There's a bit of news from here (the subject of my current post, but please know I wish to create no burden on you as to that--my only wish is for your good health): the intrepid band Contemporaneous has recorded Dylan Mattingly's Atlas, and it will also be one of the two openers for the Tribeca New Music Festival here. I I've listened to Atlas repeatedly and it still yields up riches--to me the mark of an enduring piece of music, which I hope this will become.

Sue, you are one in a million, and how thoughtful of you to wing concern so promptly over to Djenne Djenno. I'll be sure to look at leisure - have enjoyed your NYscapes with clouds, and will be back; forgive. The World of Yesterday - a truly great book from a great and noble man.

Dearest David,
good to see you back!
Thank you for your support. I was wondering why there were so many people reading my blog today, and now I know why!
I am safely in Segou.On to Bamako tomorrow- the crisis is indeed worsenig, with sanctions started today and borders closed.
Lots of love from Sophie in Mali

Not my doing, ma chere - they were looking long before I (finally) posted this evening. You really should be the main port of call now that world reportage is such crap on the situation. If you have time, do keep us posted over there.

There has now been some comment on the Mali situation - quite ( for them) a longish session on the Today Programme today 3rd. But it has been mainly on the coup in Mali, the forthcoming (?) elections and the ( quite strong it seems) reaction from the neighbouring African States. So the Touregg angle seems underplayed. However I may have missed something.

Hurrah for the return of Mr Nice !

As I wrote over on Sophie's blog, there was a very eloquent representative from Young Tuaregs answering questions on the BBC World Service's 'Have Your Say' this lunchtime - and no Malian to provide another point of view. This is as Sophie reports with reference to French radio: the Malian people just don't seem to have a voice at the moment.

All is not as orderly as this young man suggested. Recent news tells us that the Islamist faction opposed to the main Tuareg rebel group out to establish its state of Azawad ripped down its flag in Timbuktu and is going around implementing shariah law. The real worry, surely, is this group pressing southwards through Mali. The only thing that seems sure at the moment is that the current Malian junta has to step down to avert total disaster for its country.

Welcome back -- you have been missed. I hope the lengthy ordeal is now well and truly done with.emminey

It's very good to see you back I hope recovered. Sorry to nag but I'd still like to read Volume 2 of Prokofiev before I shuffle off. I'm now 77!

So good to have you back, David. Went away for a few days last week and started reading a proper book for the first time in several weeks (since my sojourn at the John Radcliffe). Deep joy.
It was Henry Handel Richardson's second part (The Way Home) of her triple decker, The Fortunes of Richard Mahony. It opens in Lyme Regis, where we were staying, and her house and garden there, still stands, rather neglected. So rude about the snobby natives. No wonder she's not much celebrated in the town.
All best wishes to you.

Thanks, Will, Glen and Roger, for such heartening good wishes - and hoping, Roger, that you're waxing healthier by the day. I'll do what I can to oblige with intelligence on all fronts, though it may still be a bit fitful...

David, hello, Will just told me you are back. I was about to write to you to enquire on your health. So happy to read this post and others. Looking forward to much more.

dearest David
So wonderful to have you back writing again. It was equally wonderful to see you if only briefly when I was there in January. Of course my being there had much to do - as do so many things that I seem to do, read and see - with something you had written. I'm elated to have you back influencing my life.

The biggest of hugs to you and to the diplomate!

Thanks so much to both of you. Next time you come, I hope I'll be on better form...but it was great to see you anyway.