Beauty by the book 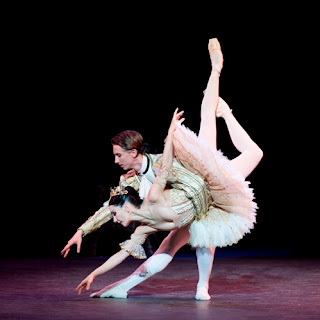 With apologies to the balletophobes, it’s Aurora time again. And on this occasion I don’t disagree with anything in the Arts Desk review by my eloquent colleague Ismene Brown, who took me along to the English National Ballet Sleeping Beauty (photos - only four to choose from, sadly, which is why you'll see them so often - by Patrick Baldwin for ENB). Perhaps, with infinitely less knowledge of the steps and technical difficulties involved, I have more than just one reservation about ace ballerina and ENB artistic director Tamara Rojo’s Princess, pictured above with Vadim Muntagirov.

It’s not just that she goes to the altar untransfigured by love, but that there’s not a hint of girlishness about her 16-year-old in Act One. She tackles the absurd number of early challenges with aplomb, but the face is mask-like, except for when the mouth opens and closes in preparation for a hair-raising sequence. Which only, for me, highlights the narrative brilliance of Matthew Bourne in making Aurora a bit – Ismene thinks way too much – of a wild child.

But otherwise the shows are not really comparable: one is a consistent piece of novel storytelling, a dance-panto, whereas this lavish recreation of Kenneth MacMillan’s Petipa-faithful homage for the American Ballet Theatre preserves the aristocratic tradition without quite pickling it in aspic.

You’ve got to do it at the highest level, though, and ENB can. The Nicholas Georgiadis costumes are a wonder; as Ismene points out, they are as lavishly detailed for minor figures like the nurses, the Puritan spinning women and the haughty, stylishly hatted ladies of the Prince's court as they are for the individual fairies and regal mortals. Peter Farmer’s old-fashioned leafy painted flats are a bit minimal by comparison, but provide a pretty framework. You also need to be able to cast the character variations from strength, too, and this was for me the most amazing aspect of the production.

The highlight, perhaps, is the Prologue’s Pas de Six. What extraordinary patterns Petipa demands from the 6x6x6 combinations of fairies, cavaliers and lilac entourage, and how perfectly that's realised here. What character there was in Nancy Osbaldeston’s finger-pointing Golden Vine and Shiori Kase’s sweetest of songbirds.

Maybe Kase’s smile is in default mode, but she used it to equally winning effect as Princess Florine in Act Three, partnered by the muscular but agile-legged Yonah (nephew of Carlos) Acosta, confirming the promise we’d already enjoyed in Le jeune homme et la mort. Osbaldeston shone again as Red Riding Hood, and lest we thought the royal couple’s thunder might be stolen, Muntagirov's immensely likeable Prince used his tall personage to peerless advantage in his tarantella. Rojo does aristocratic best, and was fine as a glacial Vision Aurora in Act Two. It would be hard to find better personifications of Good versus Evil than Daria Klimentová’s imperturbable Lilac Fairy and James Streeter’s Carabosse, memorably dressed as a wraith Queen Elizabeth who gestures stylishly enough to avoid toppling over into camp. 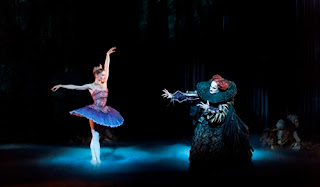 Of course I’m going to moan a bit about the cuts in Tchaikovsky's greatest score, more within numbers – often musically illogical – than with respect to the usual casualties. There, though, we could have had 20 minutes' more music rather than an unnecessary interval between Prologue and Act One. But how good to have an excellent live orchestra with such first-rate wind soloists (Gareth Hulse a real luxury in the best Grand Pas oboe solo you’ll ever hear).

I always wonder who dictates the tempi, conductor or dancers; two of the Prologue variations as well as Aurora’s in Act Three feel way too slow. There were a few smudgy ensembles but overall Gavin Sutherland led a confident performance. No doubt about it, though, this is the highest-level Gesamtkunstwerk Beauty on show. The regions who’ve already seen it must have wondered what hit them (Oxford and Southampton have yet to benefit). And you may well get a different Aurora and Prince, who should be as good if not better. But don’t be too timid to try out the Bourne Beauty too.
Posted by David at 18:02

Ah, the serendipities of life: today, I arrived home after a week in NYC to find the Jarvi/Sleeping Beauty CD in my mail. I've been listening to it tonight, though I want to give it a focused listen with the liner notes in hand, which I hope to do before too long. (I thought since I stopped working, I would have more time, not less, but, as all who have gone there before me predicted, it seems to be the other way around!) My Dresden Der Rosenkavalier DVD also finally showed up today, so all I am now missing is the Jarvi Don Quixote, which is on backorder, it seems. Meanwhile, the French Revolution is proceeding nicely, and Mantel's depiction of Robespierre sly and sure. So, as you can see, you're keeping me very (happily) busy.

I had reason to think of you particularly this week, while in NYC, at the opera (Il Trovatore). Stephanie Blythe and Alexey Markov were excellent, but not enough to save it. The orchestra sounded off somehow--and others must have thought so, too, as there was booing of the conductor. I've not witnessed that before. Things will improve, I think, with the next operas on the docket, but I have to say, I'm surprised. I know there are issues with the Met under Gelb, but still, it is the Met, and I wanted to think that would guarantee at least a reasonable level of quality. Apparently not.

My most collegial of colleagues Graham Rickson loved the Jarvi Beauty to bits on The Arts Desk - he was discovering the score and thrilled by it. Apparently Tim Ashley on The Guardian didn't care for it, but I haven't seen his review.

Here's a BBCSO concert you have to catch on the R3 iPlayer, also reviewed on TAD today - starts with Night Ferry by Anna Clyne, very evocative and well-scored new piece (though, as often, needs pruning). Plus young Ben Grosvenor in the Britten Piano Concerto and a very moving Elgar One under Andrew Litton.

Sorry Trov was disappointing - when is it not, in the opera house? Surely not that Vick production, is it? The Met's Troyens also sounds very average.

Interesting about Clyne. I've heard only two previous pieces of hers (both smaller works: one used words, the other what I'd call heavy breathing). I wasn't fond of either, to say the least, so I set her aside. I've now given one listen to Night Ferry and need another, but it's already clear I should pay more attention to what she's doing. I agree with your assessment that this piece could use a trim, but I, too, found a lot to like. I'm looking forward to listening to the rest of the concert too & it's thanks to you I've caught it in time.

As for the “Trov” (look at this newbie, using the lingo), I'm afraid it was the "Vick," if by that you mean David McVicar. I should have exchanged the tickets for Maria Stuarda, but didn't get around to it. (BTW, Les Troyens has received much higher marks with the new tenor, Bryan Hymel, and Susan Graham is apparently stunning.)

I'd love you to say more about "when is it not, in the opera house?" I've too little experience to know what you mean by that, but after these disappointing productions at the Met, I was thinking I'd be better served going to operas in smaller venues. That can't be the whole answer, but I’m getting the impression that Gelb is trying to compete with Broadway, and that cannot be a good thing, if true.

Speaking of British music, I now do have tickets in hand for two of the Juilliard "British Renaissance" concerts. Looking forward to that.

I meant Graham Vick rather than DMcV, though I'm otherwise being a bit thespy with my abbreviations, I know (a fellow Shakespeare course student used to refer to 'Winter's' and suchlike).

I have a Trov problem, though - a couple of recordings I love, though I've never seen it well done on stage. The melodrama, the four great voices - the production rarely comes up to the mark. First time as a teenager I got a Covent Garden production where the stage crew were on strike, so no scenery (worked quite well against black background, actually) and Rita Hunter replaced Martina Arroyo. She sang in English, the rest in Italian. In Act 3 she asked Manrico (Bergonzi) 'what are you saying? I cannot understand you!'

In those early days I also saw Sutherland as La Stuarda. That was when I began to realise the rep my idol sang wasn't really for me. Then came Behrens in Salome...

Clyne's notes were rather pretentious and confused, I thought. But the piece was clear enough.

Many operas have a melodramatic plot - "What is too stupid to be said must must be sung" said Voltaire, and he had not been exposed to the late 19th century. But most of these operas have their greatness in the music, in the musical analysis, so that the plot is merely the skeleton on which the flesh of the work is hung. [This is why I am against anything but the most limited sur-titles, and certainly no sur-titles when the opera is sung in English here in England] Nevertheless I cannot but feel that in the case of Trov the melodrama is too melodramatic and it is not surprising if staging is not satisfactory. I find Salome the same, or anyway too sickening