On the bones of the Crookback 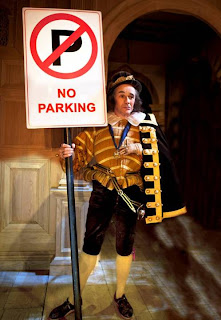 Pausing in the middle of a demented schedule to bring you a topical shot by Simon Annand: the supernaturally brilliant Mark Rylance, whose penultimate Apollo Theatre performance as Richard III I saw on Saturday afternoon thanks to an unexpected return ticket, catches up with the news from a York car park.

I can't wait to burble about one of the great performances I've witnessed in several decades of remarkable Shakespeare (another, of course, was Rylance's Olivia in the Globe's Twelfth Night, which I saw three times on its first and second outings). I count myself lucky also to have witnessed David Troughton's bunchback in a haunting RSC production by the late Steven Pimlott, and Kathryn Hunter preceding Rylance at the Globe in another funny/psychotic characterisation let down by weaker women in her supporting cast (Rylance's team, and Tim Carroll's production, were nigh perfect). Anthony Sher and his thousand and one things to do with a pair of crutches hadn't worked for me in the same way.

Enough: back to the second act finale of Mozart's Magic Flute as I round off six sublimely influenced sessions at the City Lit. More anon on Rylance's theatrical genius.
Posted by David at 12:20

Richard III - As the skeleton has proved that Richard fought hand to hand at Bosworth, the Sher interpretation with crutches is incorrect anyway, though I suppose one could argue that Sher presents the essence of the king's character ( as seen in Tudor propaganda ). Also Richard's niece Elizabeth of York married Henry VII, so that through Tudors, Stewarts and Hanoverians we get to the present Queen and her family. Hence, why did the DNA tests have to be carried out on a remote Canadian? The female line is OK for testing DNA, and anyway applies to the Canadian also

Well, I find it fascinating up to a point - at least as far as the reconstruction of the face goes (hair apart, he does look very much like Rylance's portrayal).

Well, I've got behind again here, I see. Though I don't know them as well as I ought, I do love the history plays, and a good Richard III is hard to beat. I'll look forward to your further report.

Also must thank you for the DVD rec., on which I will definitely follow-up. I've now had a full listen to Jarvis's The Sleeping Beauty with your liner notes in hand. I don't recall what superlative I used for those liner notes last time, but they are STUPENDOUS. I loved listening for the phrases and instruments you named, not to mention the brilliant bits of musical history. My favorite may be, though so many to choose from, Shostakovich's fascination with what I guess I'll call the Tom Thumb chords--and interesting to learn that this number is usually cut from productions of the ballet.

Well, thank you, Sue. Those notes I AM proud of, because I've always wanted to read detailed accounts of the great ballets' musical numbers and I'm not sure it's been done until now. But this obsession goes right back to childhood, when I used to sit on my swing and compile my own personal highlights from each Tchaikovsky and Delibes ballet. Sad, I know.

It's a real shame about Tom Thumb - Petipa's choreography for the children's (boys') corps de ballet is a real delight. ALL the divertissement numbers get choreographed in a New Year's Eve special staging of Act 3 from the Mariinsky Theatre with Gergiev conducting (it's on Bel-Air DVD and it also has the consummate Uliana Lopatkina as Pavlova's Dying Swan).

Well, David, the thought of you on your swing compiling highlights is now going to be an indelible part of my listening experience! Would that I had done anything so useful on my swing, I might be far further along in my musical education now! I have marked this DVD to the wish list, too. I was listening to The Sleeping Beauty (as well as Don Quixote) again this afternoon. They are both such marvels--and I never would have known to pay attention to either of them, but for you, so thank you.

I've just this early evening listened to another R Strauss Don Quixote to review for BBCMM: a real stunner with Alban Gerhardt, Lawrence Power luxury casting as Sancho and Marcus Stenz conducting the super-sophisticated Gu(e)rzenich Orchestra of Cologne, a band I've come to love. Top-notch Till Eulenspiegel too.

I'm glad you love two of my Desert Island works (out of about 100 - how would I ever whittle it down to seven?)

My suggestion for Desert Island Discs ( 8 not 7) would be to choose music that had hit one at the various stages of one's life, the stages one is asked about. This would be in line with the dramatic structure of the programme ( you could give for example the piece that you played most at Edinburgh etc) and also help to get away from a set of choices which one happens to go for strongly at the moment. However, if you are asked, you must insist on your choices, as there appears to be a strong push at the moment to get everyone to choose pop

Well put, sir. A snippet from one of the Tchaikovsky ballets would have to be my starting point, as a Swan Lake excerpts LP was the first one I was given (before that, playpen time was rocking to the Beatles, but I can't quite justify their inclusion, nor 'Pinky and Perky's Beat Party'). Then G&S...then the serious stuff, though a great chanteuse would have to be included. Probably Nina Simone's 'Feeling good' or Peggy Lee's 'Is that all there is?'