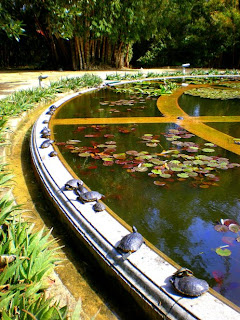 There had been days of British-style rain and cold, our soon-to-be hostess in Palermo, Nicoletta Lanza Tomasi, wrote to me when I enquired from London about the weather we might expect. But now, she added, they were enjoying 'a glorious, warm spring day: one of my turtles woke up asking for food'. Four days of blue skies and warmth greeted us, and on our first wanderings around the city, we found a gaggle of turtles basking on the rim of what's called the Aquarium at the heart of the extensive Botanical Gardens. Specimens TBC; though I think the ones with the red markings are box turtles, and the others ought to be Sicilian pond turtles. 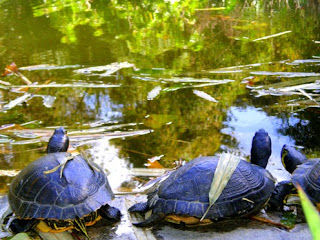 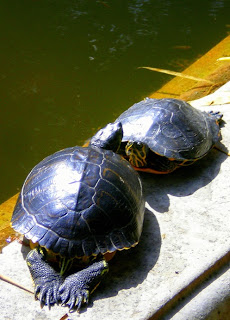 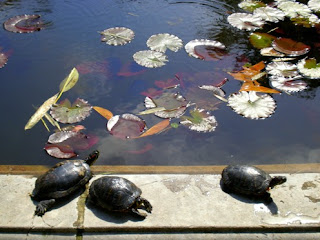 It was heartening to find nature asserting itself in the rather unkempt space the Botanics have become today (despite their status under the protection of Palermo University's Department of Botanical Sciences). There is indeed a sense of the 'decrepitude, scrubbiness and sloth' of which Peter Robb writes in Midnight in Sicily: though this cannot have been that 'most amazing place in the world' which he thinks Goethe was invoking. The writer and geologist's visit to 'the public gardens', which inspired him to dream of Homeric idylls and a drama based on the Nausicaa episode in The Odyssey, took place in 1787. Yet the Botanical Gardens of the Royal Academy of Science did not open to the public until 1795, and work on its neoclassical buildings had begun only in 1789. 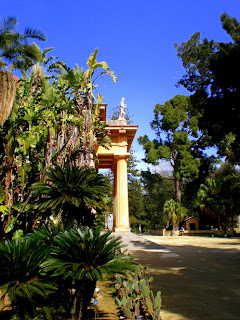 The exhibits in the Gymnasium, flanked Roman-style by Tepidarium and Calidarium, are well enough displayed, and there's some attractively faded floral frescoing to look up to. 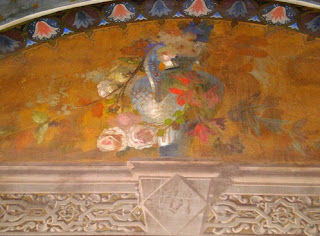 The avenues leading north towards the Aquarium are dominated by some of the larger specimens of root-crazy giant figs and/or banyans, above all Ficus macrophylla, Australia's Moreton Bay fig, planted in the 1850s and seen here to the right. 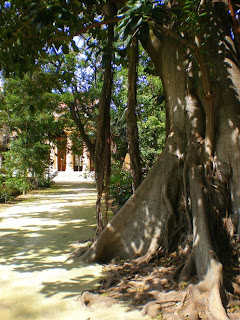 Its effects on the attempted ordering of the old stonework are all too clear to see: 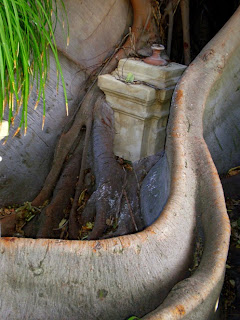 The giant of them all, though, is the Indian banyan further north, Ficus benghalensis. Even the ones we saw in Chennai and elsewhere in Tamil Nadu weren't quite as big as this. There's another on a similar scale in the Giardino Garibaldi. 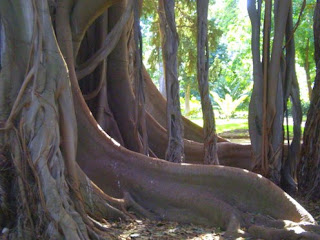 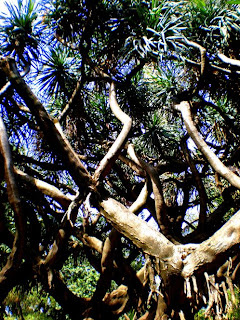 A fair few big 'uns are dotted around the gardens, but the most evocatively placed is the one on the artificial hillock between ponds (central in this photo). 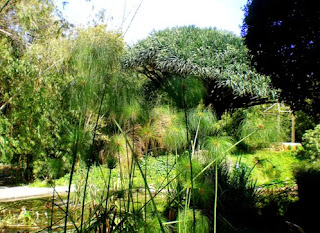 One of several avenues lined with tall palms leads to the largest greenhouse, donated by Queen Maria Carolina and reworked in cast iron during the second half of the 19th century. 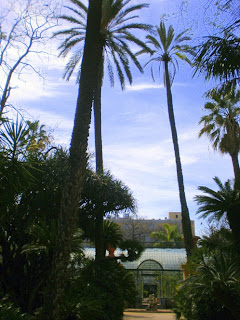 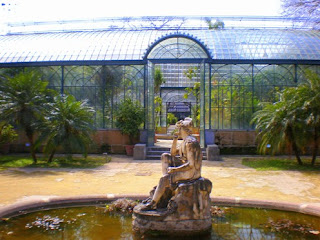 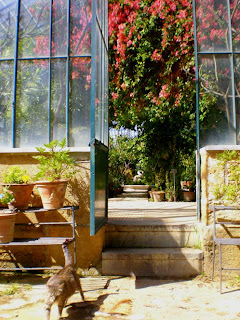 Much of the impressive cactus collection can stay outside - ah, for such a climate - 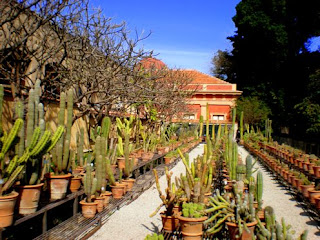 though the more spectacular numbers, Echinocactus grusonii and - overlooking it - Machaerocereus gummosus remain within. 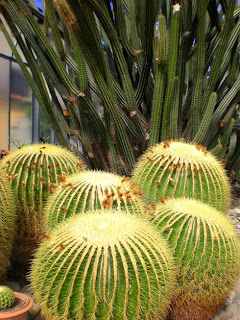 The area immediately around the cactus and succulent houses is riotous with grapefruit, orange and mandarin trees, the latter introduced into the Mediterranean here, 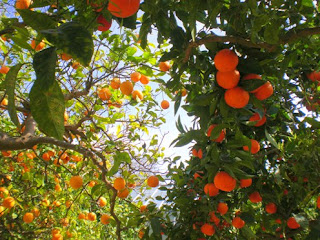 while in the more open spaces towards the regional glasshouse are diverse specimens of another scary tree family, that of the ceisbas forming several avenues with various subspecies of chorisia. What look like fruits are flowers waiting to burst. 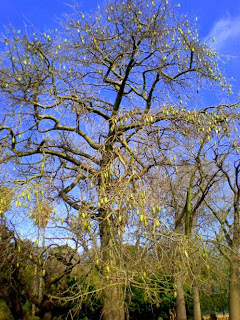 I thought spiny or tusked trunks like this were only to be found on Madagascar, but these varieties hail from Brazil. Not sure which is which but I noted Chorisias crispiflora and speciosa. 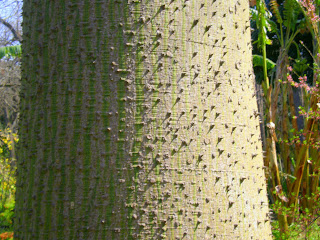 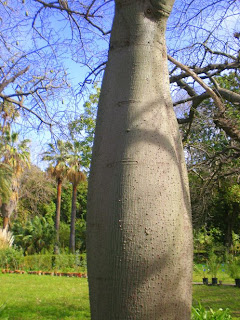 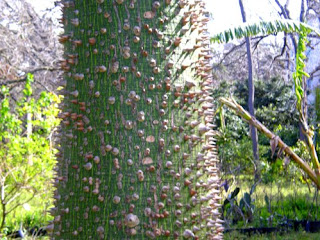 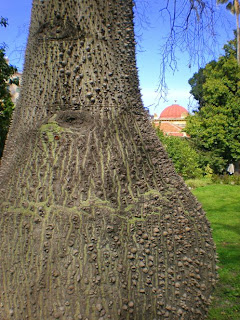 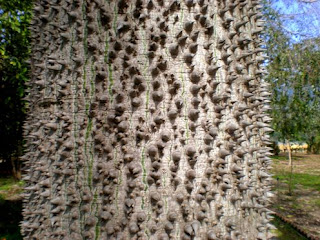 Which led me, via groves of giant bamboo to be seen in some entertaining photos of family picnics in the early 1900s, 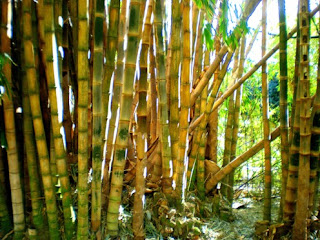 back to our so-called Aquarium, one of the earliest structures dating from 1794-8. You'd need an aerial view to see its three circles and 24 small basins - no doubt better delineated when the lotuses and lilies are in peak flower. But I wonder if there's always the pleasure to be had from the spectacle of turtles in a ring, all apparently getting along nicely with each other. 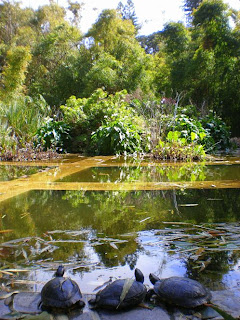 There is a turtle-ring--though not nearly as grand as this--at Innisfree Garden. It took the longest time for us to figure out what it was for--might have helped if a turtle had ever been on it. (They prefer a long log near the entrance, who knows?) The Banyan tree swallowing up the stone work is remarkable--well, everything looks so lush and exotic. I don't know why it always amazes me to see mandarins and other citrus growing on trees--after all, they have to grow somewhere, don't they? We did have a warm day here today--a little too hot, oddly enough, but at least, in the warmth, there are small signs of things beginning to perk up.

To us, your beloved Innisfree has a flavour of the wild and exotic: I thought of it there. I long for a bit of jungliness - shall never forget the shaggy, lush parks of Dessau with their thousand croaking frogs.

Such photos, David! They have warmed me a little now that we're back to the bitter cold again.

Thanks, Alison - but which Alison, I wonder? Maidie?

I always love those turtles, so quiet in their little world, peaceful in the pond. Sicily is truly a wonderful place.

They're carnivores, though, I learn, and very choosy about what they eat.

Gourmet Carnivore turtles, umm... who knew maybe that is the secret to longevity.