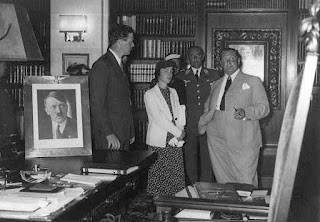 That's Charles Lindbergh on the left, the famous aviator who was to lead the America First campaign and decry 'the Jewish race' for trying to lead his country into the Second World War, in the delightful company of Hermann Goering, presumably at the time of the October 1938 dinner in Berlin where Goering presented Lindbergh with the Service Cross of the Golden Eagle. No such photos of Trump with Putin have come to light, prompting some amusingly creative collages which I assume are copyright so won't use here. But you can be sure that if the world's worst-case-scenario comes true and Trump is elected, he'll be holding meetings with Putin like the one Philip Roth imagines a putative President Lindbergh having with Hitler in Iceland, and later with Von Ribbentrop in the White House, in The Plot Against America. 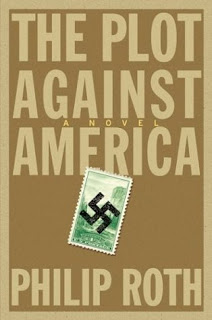 There are probably more differences between Trump and Lindbergh than similarities - no-one sees DT as a clever operator hiding behind others, for instance. But it seemed timely to read this what-if masterpiece of a novel by a great American under present circumstances. Apart from the lethally eloquent and/or direct prose style, Roth's genius is to put himself and his family into the alternative picture, building on the anti-Semitism he experienced in New Jersey as a child. 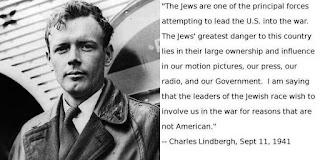 I can't tell which of the friends and relatives gathered around the Roths are real - would love to read a biography or an alternative study which sheds light on this - but the portraits of his honest ma and pa break the heart. It isn't easy to make ordinary decency that interesting, but put it up against its opposite and you have some powerful situations. If you don't think you want to work your way through the whole book - amazing how people keep on saying 'I don't have the time to read'; there is ALWAYS time to read - then the second chapter. 'Loudmouth Jew (November 1940-June 1941)', about the Roth family visit to Washington and the anti-Semitism they experience there, is a locus classicus of vivid writing. Roth also makes some powerful statements throughout the book about the kind of man his father was, both as an American Jew and as a Mensch. More often he highlights what he was not:

It went without saying that Mr Mawhinney was a Christian, a long-standing member of the great overpowering majority that fought the revolution and founded the nation and conquered the wilderness and subjugated the Indian and enslaved the Negro and emancipated the Negro and segregated the Negro, one of the good, clean, hardworking Christian millions who settled the frontier, tilled the farms, governed the states, sat in Congress, occupied the White House, amassed the wealth, possessed the land, owned the steel mills and the ball clubs and the railroads and the banks, even owned and oversaw the language, one of those unassailable Nordic and Anglo-Saxon Protestants who ran America and would always run it - generals, dignitaries, magnates, tycoons, the men who laid down the law and called the shots and read the riot act when they chose to - while my father, of course, was only a Jew. 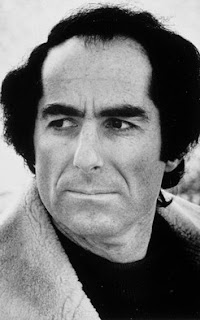 Roth (pictured above) makes the distinction between his father and other Jews they knew, though:

For good or bad, the exalted egoism of an Abe Steinheim or an Uncle Monty or a Rabbi Bengelsdorf - conspicuously dynamic Jews, all seemingly propelled by their embattled status as the offspring of greenhorns to play the biggest role that they could commandeer as American men - was not in the makeup of my father, nor was there the slightest longing for supremacy, and so though personal pride was a driving force and his blend of fortitude and combativeness was heavily fueled, like theirs, by the grievances attending his origins as an impoverished kid other kids called a kike, it was enough for him to  make something (rather than everything) of himself and to do so without wrecking the lives around him. 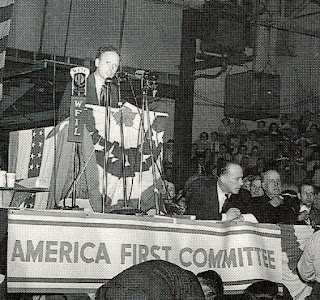 As for the Jews who in Roth's dystopia kowtow to Lindbergh (pictured above before the 1941 speech which in reality toppled him), there is a devastating portrait in the shape of Aunt Evelyn who marries the self-satisfied, self-compromised Rabbi Bengelsdorf.

As always with Aunt Evelyn, there was something very winning about her enthusiasm, though in the context of my household's confusion, I couldn't miss what was diabolical about it as well. Never in my life had I so harshly judged any adult - not my parents, not even Alvin or Uncle Monty - nor had I understood until then how the shameless vanity of utter fools can so strongly determine the fate of others.

One can't take it for granted, unfortunately, that more than half of voting Americans come to understand the same thing before it's too late. If they don't, the world will sufer from a regime that might be longer-lived than the fictional presidency of Lindbergh. In the meantime, here's hope 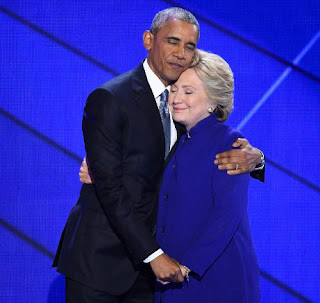 and here may be a greater part of the reason why Donald behaves as he does - behold The Mother. 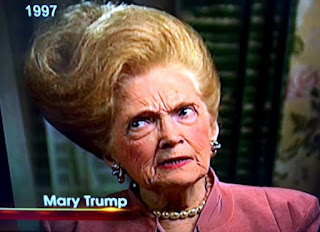 Ann Applebaum is very good on the Trump/Putin connection, and although her opinion of Putin's actions in Europe as well as America have something of the feel of a conspiracy theory her hard nosed logic is impressive

I like what I've read from Ann Applebaum, though not too impressed that the neo-con-ish Legatum Institute in London with which she has ties invited Michael Gove as the guest of honour - by that stage, post-Brexit, it was definitely 'dishonour' - to their summer party. Oh, the shame of those folk photographed with that cove.

The news comes so thick and fast it's impossible to keep up with it, let alone digest it. A friend sent on an article to me today that further analyzes the ascent of Trump, from the view of "The Rise of American Authoriarianism." It's here. The Economist article's view that the counterpoints are changing from Left and Right to Open and Closed, an issue which has also been discussed in at least two other articles I've read my side of the pond, seems to me to provide excellent insights into where we are (both sides of the pond). It is worrisome to me how hard a sell "Open" is even among some of my friends who are generally enlightened in their thinking.

Again, the complications of psychology seem to get left out of merely 'political' arguments. You could boil it all down to people's fear of the unknown, but there does seem to be some kind of nihilistic 'tear it all down', if not a death wish, among the irresonsible part of the electorate. And, yes, the phenomenon here would be well absorbed in the run-up to the US Election. The frightening thing is that nothing - the day of Jo Cox's murder and Farage's Nazi-quoting anti-immmigration poster here, Trump versus Khan with you - seems to change the course of things. As one Guardian writer put it, Trump has lost the plot, if he ever had one, but will his supporters notice or care?

I think actually the Khan incident did contribute to changing the course of things, as did the stark contrast between the Repub and Dem conventions. There are diehard Trump supporters, and way too many of them, so it will be a nail-biter to the end, but I have hope.

Never cause for complacency, but the Trump meltdown seems to be on a roll now, and it's hard to see how it won't get worse for the Republicans. I even feel a bit sorry for the old-style GOPpers. How fortunate that he's no smooth operator...but will the diehards take any notice? For them, the worse it gets the better it gets. Nothing short of Armageddon will satisfy them. Quite a phenomenon for our times, though it happened in the 1930s...