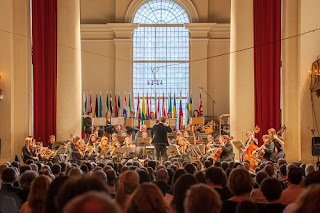 Maybe on this scale. If all goes according to the most badly-laid of all plans, the UK will be out of the European Union on 29 March 2019 and the European Commission Representation in London, which has mounted these concerts for the past decade, will be dissolved. Even if that happens, we can't let the youthful talent which came together to give us the two best concerts of the series in 2017 and 2018 disappear from our ken. Dobrinka Tabakova, whose Bell Tower in the Clouds proved a huge hit last Wednesday with everyone I spoke to, MUST be commissioned to write Brexit Piece No. 2 (Matt Kaner's Stranded in 2017 turned out, quite without warning, to be the first), and Jonathan Bloxham with his Northern Chords Festival Orchestra (pictured above) must be involved once more. Funds CAN be raised. 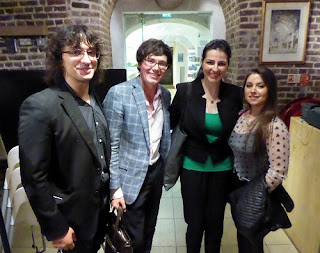 That's Dobrinka pictured above in Bulgarian green after the concert by me - all event pics by Jamie Smith - in the company of compatriot conductor-composer Dorian Dimitrov and my other New Best Friends, BBC Young Musician winners Martin James Bartlett and Lara Melda, whom I met at the Proms launch and promptly invited. Congratulations, by the way, to this year's laureate, 16-year-old Lauren Zhang. I haven't yet had time to watch the final, but I'll be doing so here, and very curious to know what she made of Prokofiev's titanic Second Piano Concerto. Wouldn't necessarily have chosen her from the piano final, the only strand I've seen so far, but all the competitors were phenomenally gifted and showed a staggering level of technical wizardry.

Meanwhile, it's too soon to think of 2019 now. Of one thing everyone who was present must be sure: the whole concert worked at the very highest level of engagement, professionalism and sheer love. Only at the very end was there a chance to mourn - which the audience seemed to do, totally spontaneously, with their 90-second silence at the end of a beautifully-phrased Ode to Joy, for which we always stand. 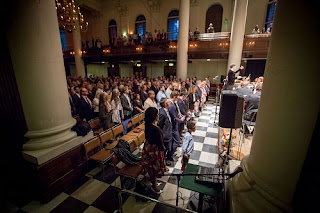 The film, part of the complete concert which will follow in due course, has already had 27,000 hits on the EC's Facebook page - if you haven't already seen it, here's the place.

Otherwise, this year's programme was more celebratory and exultant than the last one, which I think came off equally brilliantly but had a more elegiac tone (not least Martinů's Ariane threatening to throw herself off a cliff, which resonated unexpectedly with Brexit). What more effervescent way to start than with Mozart's Overture to The Marriage of Figaro, a performance of which better articulated at high speed I've never heard? And it ticked so many boxes of the 'crossing borders' theme - operatic treatment by an Austrian composer of a French play set in Spain with an Italian libretto. Matching it for sheer brio were the two numbers from Massenet's ballet music in his underrated opera Le Cid. Getting the dance idiom right is tough - I had the Israel Philharmonic/Martinon classic in my head - but Jonathan and Co pulled it off at the highest level. 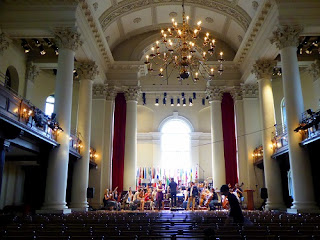 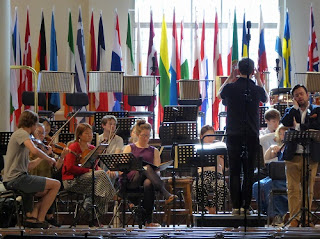 I was stunned by the strings' imitation of far-flung trumpets at the start of Britten's Les Illuminations. This may have been the best group yet; engaging leadership by Thomas Gould, leader of the Britten Sinfonia and a well-established soloist in his own right (well netted, Jonathan; TG pictured below with another born leader, Agata Darashkaite, on the right) certainly helped, and it was so good to see him looking back to the second deskers from time to time. 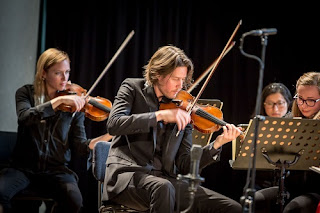 Tenor Ben Johnson (pictured below) is a justly celebrated Britten interpreter. He certainly knew what to do to press the right tonal buttons and to put across the text - wittily so in 'Royauté,' with rapturous wonder in my favourite song from the cycle, 'Antique,' the A major lovesong Britten composed, along with Young Apollo, while under the spell of 17-year-old Wulff Scherchen. 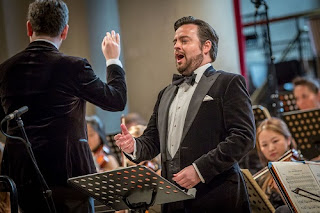 Ben's protegée, soprano Jenny Stafford, sang 'Villes' and 'Marine' in this first half of the work - an experiment based on the fact that Britten wrote Les Illuminations for Sophie Wyss, but it was his long-term companion Peter Pears who immortalised it. The floridity suited Jenny well, and later she faced the many challenges of Donna Anna's 'Non mi dir' with high style - vivid, meaningful recit and expressive plangency made of the tricky rapid runs towards the end. 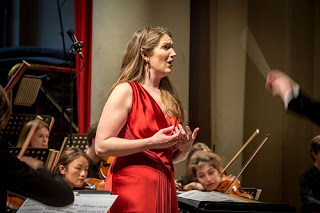 Ben prefaced it with a lovely performance of 'Take a pair of sparkling eyes' from Gilbert and Sullivan's The Gondoliers. I'd already twice admired his funny, touching and diction-perfect Lord Mountararat in ENO's Iolanthe. He has such a gift for comedy and applied it, too, in the midst of the pathos of the Fiordiligi-Ferrando duet here. 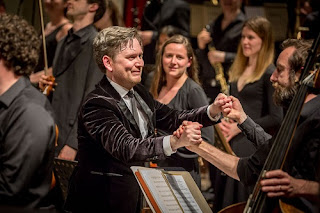 Jonathan is a gifted Mozartian, but he had to embrace a whole lot more here. He told me after the rehearsal that changes between styles were exhausting, but he and the orchestra brought them all off with magnificent focus, and I can't imagine even the most unmusical member of the audience finding anything boring or otiose. The rich orchestral sound at the start of Bruch's Adagio on Celtic Themes took the breath away; young Bulgarian cellist Michael Petrov brought tears to the eyes with his first entry. My companion Edwina with her artist's eye noted how he never looked at his instrument, and engaged with his conductor very lovingly (they've know each other since student days, and Jonathan himself is a top-notch cellist who's duetted perfectly with Michael in Vivaldi). 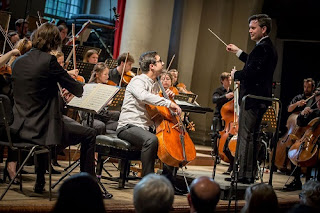 Dobrinka's piece impressed everyone - not just the ethereal bell sounds, but also the precision with which the Northern Chords strings placed their vigorous pizzicati within intense rhythmic passages. And the darkness-to-light finale from Brahms's First Symphony was a total triumph in more than one sense. Never heard the horns play their Alpine counterpart more convincingly (the first horn is on trial with, I think Jonathan said, the Philharmonia) nor the trombones intone the chorale better. And the big melody was done with grace and smiles. 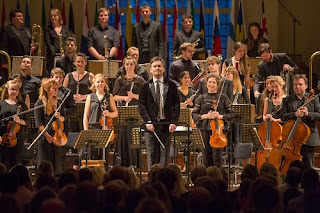 An appropriate height to hit before the apparent requiem of silence that greeted the European Anthem. With folk like this involved, how can one be bleak about the future? Very best wishes, meanwhile, to Jonathan's Northern Chords Festival, which launches tonight with many of the same artists; if only I could be there.
Posted by David at 10:51

It was a poignant evening. It was like losing a dear friend and wishing somehow that we'd been more engaged and appreciative before this sad moment.

Agreed, Juliette, though last year's concert felt more elegiac. Certainly you and I always were 'engaged and appreciative,' though maybe we feel we could have done more.

Jenny Stafford is a voice to look out for... Dobrinka Tabakova's piece about walking one summer in the Dolomites took me down the winding streets of a mountain village. Her music transported me around every corner and over every barrier. Bravi tutti!

Thank you, Caroline, and again, agreed. DT isn't just Bulgaria's best, she's one of the finest contemporary composers in the world today. A born communicator.

Congratulations, David, on writing movingly on this transfigurative concert experience. I cried.

So did I during the concert, Thierry: when Michael Petrov made his first entry in the Bruch, at the horns in the Brahms and, of course, during the silence after the Ode to Joy.

This cannot, and surely will not, with advocates like you, be the last.

Well, I don't hold any key to funding, but we can all do something together. If not the orchestra, then at least a chamber recital. But so far I insist on the former. A CD will be winging its way to you when done.

I will treasure the CD. Thank you!

There were many poignant and also joyous moments during the evening at which, as at the previous one, we had a bird's eye of about half the stage (just behind the camera that shows the opening view in the trailer in fact), but as I could clearly see the percussions and double basses I was more than happy. I had to strain a little to see the cello so didn't clock Michael Petrov's playing without looking at his instrument, but as a budding fretless player myself (electric bass) I'm always in awe of the accuracy of all string players.

The Bulgarians certainly shone out and I'm delighted to have been introduced to Dobrinka Tabakova (in person as well as to her work) and will be on the watch for more. But all the performers were magnificent, especially the timpanist who had to constantly tune up throughout the evening, what a nuisance for her. Illuminations was a real joy to hear, as I have a cherished Heather Harper version from 1971 coupled with the Serenade (Robert Tear and Alan Civil) and would prefer this to any other recording, Peter Pears notwithstanding.

As emotional as it was, the final silence was wonderful and quite unusual, mostly audiences react immediately (in a positive way) without allowing that time for it to settle and sink in. It's actually as important as the music for me and cudos to Jonathan Bloxham for holding it for as long as he did and for the audience to be so still.

Looking forward to the next one and I'm sure there lots of ways to raise money online for it if necessary.

Such a detailed feedback, Howard, thanks so much - you noticed some things I didn't. Interesting that Jonathan didn't do the usual thing a conductor does to command the silence; just lowered his baton respectfully and then wondered what was (as in wasn't) going on, but once he twigged he just waited, Several people have assumed there was always this silence after the Ode to Joy - of course it was a first in everyone's experience, and completely spontaneous.

Pleased to see Dobrinka commenting so intelligently in the BBC Young Musician final (which I finally caught up with last night).