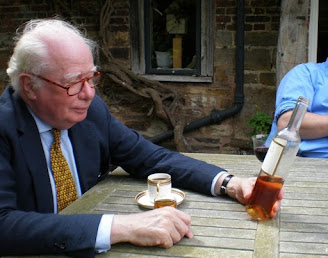 Regular readers (if such there be) will have noted the regular clashes, joshes and occasional agreements I've had in the comments section with the chap I often call Sir David. 'Damant,' as he always announced himself when he phoned up ('Damant here - now, dear boy...') was found at home in Stamford, dead of a heart attack at 83. For such a bon viveur, he made a remarkably good innings, and one can't imagine him fading away slowly, so it was in a way good for him. A shock to those of us, though, who held him as a very dear friend: maddening, provocative, with the carapace of a Tory but the soul of the best kind of liberal, robustly gay, above all incredibly kind. He never spoke ill of people, taking as his motto 'all God's chillun got wings'. He could bang on about the same thing over and over again, as he often did in the comments here, and then come out with something fresh and thoughtful.

There aren't enough pictures of him, so I limit myself to a shot up top taken at the Sussex home of our mutual friends Eben and Themy Hamilton (J, my partner, has, on request, had to be excised), and one more of him at one of the 12 Star Gallery events, in company with the splendid Andrew Logan. 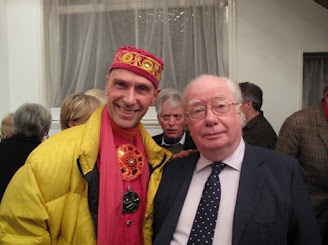 It's not my intention to provide any kind of obit here, but I must reproduce a discovery which made us laugh through tears, since it came to life, as it were, some weeks after his death when J was searching through references and tributes. We'd known nothing about it, but it's so absolutely characteristic. I take the liberty of reproducing from the Stamford Mercury of 31 July.

A classical music fan is the latest to be refused permission to put on entertainment in a Stamford graveyard.

David Damant, 83, was hoping to play videos of classical music through a television and speakers in St Michael's Churchyard to enrich the High Street shopping experience.

But members of Stamford Town Council voted by majority to deny the request during a meeting on Tuesday (29 July). 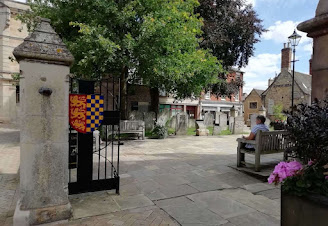 They stressed the area was meant for 'quiet contmeplation' while also raising concerns about crowds and social distancing.

Coun Elaine Hoope (Ind) added: 'We should also have respect for the people buried there.' ...

Mr Damant said he was relatively new to the town and was not aware the churchyard was meant to be an oasis of calm.

He said: 'As I am a new boy in Stamford - only three years - I have not been aware of the ins and outs of this splendid town.

'Obviously if that space next to St Michael's Church is for quiet contemplation it would hardly be suitable for me to have the Queen of the Night exclaiming away!'

A former key player in the world of international finance and accounting, his place was to show 21 videos while delivering the occasional commentary. Artists included the late Vera Lynn, the 'Forces Sweetheart,' who passed away in June.

'My aim was to have a jolly really,' said Mr Damant, who lives at Torkington Gardens. 'I'm always thinking of things to amuse me.

'I also think that everyone should be passionate about classical music. Composers like Mozart and Bach are like Shakespeare, Dostoyevsky and Rembrands - the greatest achievements of the human race.'

Asked if he was disappointed by the council's decision, Mr Damant replied: 'My dear boy, I don't have emotions about these things. I'm a stoic and rather detached.'

With the situation in Spain and Manchester, he said he had decided to put the plan on hold until the right time. At that point he may apply to 'perform' on the High Street.

'I won't do it until we are in a position to have an outdoor crowd,' he said. 'Who knows when that might be though. It's all quite a nuisance'.

Who knows when we will be able to hold a 'jolly' at his beloved Garrick Club? Without a doubt it must include some of those top artists who always enjoyed performing for him, including Sue Bullock, Jean Rigby, Iestyn Davies and Robert Hayward. His idea of the absolute zenith of music-drama was the scene where Don Giovanni kills the Commendatore. That will be a cornerstone. Otherwise, still no news on a service of any kind. I'll keep you posted. UPDATE: See Father Andrew Hammond's comment below with details of a Thursday service online. FOOTNOTE: I just revisited this post about on Brexit, the EU and disinformation and found one of Sir David's most sagacious comments below.

Every time we learn that someone whom we may not have known in person but whose Internet presence in the form of comments, arguments and personal opinions we took for granted just passed away, a short flash of horror runs through our minds. It is a reminder of our own mortality. RIP, sir David!

I am sorry to hear of his departure- I did not know him well, but will always remember with fondness his interesting wine tasting evening here for the Tuesday group in Ladbroke Grove. RIP Sir Damant!

Lovely to read this..absolutely David in a nutshell!

Hard to believe it is 33 years since I first sang for him for his 50th birthday at the Garrick...I do hope we can all get together and honour him at some point.

Comments so far very welcome - I am hoping this can be like the best kind of condolences book, where people leave tributes as they see fit. It's always a jolt when an online presence disappears - I well remember the shock of the sudden death of Chicago critic Andrew Patner, with whom I'd conversed over a sensitive subject here. Sophie, I think I missed that evening - Alsace wines were the subject, I believe. And it should be quite a celebration of a full, rich life, Sue. When a personality is that vivid, he/she is simply not 'gone' but hovers around. Or maybe it just hasn't sunk in yet.

You've done your Sir David proud here, and of course that newspaper find is beyond price. I "knew" him only through your blog, but even here, he was larger than life. I recall (foolishly) weighing in to spar with him myself, throwing up my hands in wonder that he could take such a position on this or that. Yet he was always as entertaining as he was provocative, and always an eager participant here, full of quotations and bits of history, along with his inimitable points of view. I'm sorry we didn't have a chance to have that lunch he once proposed "when next you are in London," and sad, too, not to continue to "see" him here. Yet it is a fine thing that your blog comments are liberally strewn with observations from David Damant, providing one of many ways he'll live on in all our memories.

Never foolish to try and argue - he might sometimes have stuck to his guns, but he could certainly adapt to opposing points of view, and in life I don't think it ever ended in anything but laughs, agreement or fond ridicule. This is a good space to think more about him, because as I wrote I certainly haven't come to terms with the fact that he's gone, and I almost expect him to leave the next comment (probably more about his favouring of the Stoic attitude. Of course he was also Epicurean, and delightfully self-contradictory, like all of us but more so).

Thank you for such a lovely blogpost. There’s so much I could and should write about David, who was one of the most important people in my life for 33 years, almost to the day.

For now I should just say that his funeral will be on Thursday 3rd at 2pm: a necessarily small-scale affair at Peterborough Crematorium. It will be live-streamed via two platforms:

YouTube - on my channel, Andrew the Chaplain. I’ll try to leave it up there as a video which can be watched later. https://www.youtube.com/channel/UCVMJkWBS5UjplrkXvFX0_vg

Many thanks, Fr Andrew. We'll be able to make the live service. How strange that will be though - fortunately my first virtual funeral.

Well written David . AS you say the sense of his Departure has not sunk in. Andrew led a simple and very dignified service and he did not falter once. Many of us will have so many rich memories of him. An annotation of memories would be wonderful.

Sadly no more shall he float down Piccadily after Lunch at the Garrick and Dinner at the Ritz and then felt compeled to have a rest on one of the decorative windows of Fortnum's.

"The rest is silence"

And well spoken, Andreas Capellanus, straight down the line and just the right tone. Also well done for holding back the tears, not that it would have mattered if you had given way.

Thanks, Liam - J and I watched at different times (I had my Zoom class early afternoon). I think a book of memories would be a splendid idea - I always think that one of the best things about memorials is that you get to know more about the whole life of the person. And of course I want to see those photos that Andrew mentioned. As I think I've written before, such a forceful personality doesn't go away - isn't really even a ghost, but there in full vividness as long as we who knew him are left to remember.

Beautifully written. It never ceases to amaze me how David touched the hearts of the people he met. Knowing him changed your life really. Even for a bit.

Fahmi, how touched I am that you commented here. More sorry than I can say for your loss. Know that such people never die. I do hope we meet, hopefully at the musical event which will for sure be arranged for David, with his galaxy of stars. We are also going to push the idea of a small book of memories and photographs.

You mean in terms of comments? It seems so. Lots of views, you'd have thought that a few more folk might have wanted to leave a tribute.

Thank you David. I really appreciate it. A good idea of a small book dedicated to him. I have the list of music of the Stamford musical event which DCD managed to finalise. Just let me know if you are curious. Thank you, again, for such wonderful words for DCD.

And thank you, Fahmi. The idea for the book is gathering steam - a friend of ours in publishing produced a lovely memoir of her father and I think my partner Jeremy has asked her to collaborate. And any list which includes the Queen of the Night AND Dame Vera Lynn must be viewed in its entirety, so yes, please! I do hope we meet when you are next in the UK - let us know.