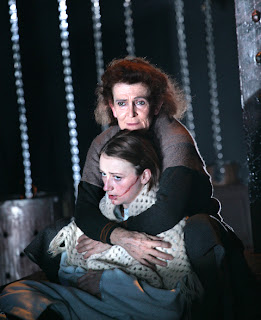 Simon Annand took this production photograph of the great Paola Dionisotti as the Kostelnicka and outstanding newcomer Jodie McNee as her stepdaughter Jenufa in Irina Brown's UK premiere of Gabriela Preissova's 1890 play. Timberlake Wertenbaker adapted it for the Natural Perspective theatre company's first show at the Arcola Theatre.

It was a revelation. I had come to admire Preissova's achievement when I was preparing classes on Janacek's searing opera at the City Lit; but I had no idea quite how much emotional power Janacek owed to the original play (in Moravian dialect) until I had the chance to see it come across with full force in this dedicated production. The tale, based on a true story of a girl whose stepmother drowned her illegitimate child in an attempt to save her reputation, is universal (even if that sort of thing doesn't happen in our culture, there are plenty of cases even in this country where it still applies). Brown gave it a timelessness by the use of music from eastern Europe and elsewhere - plausible recreations of Bulgarian throat-singing, for instance - to punctuate the scenes of village life.

I couldn't help hearing some of Janacek's unforgettable ideas at times, as in the very moving dialogue in which the Kostelnicka pleads with handsome, feckless Steva to acknowledge his child and, of course, the final scene where, her disowned stepmother having gone off to be sentenced, Jenufa faces the future together with the man who once slashed her face with a knife. Janacek's music surges in irresistible late romantic radiance; but the play is more ambiguous. 'I will be your wife', says Jenufa. 'After all, it's what she wanted. It's what Mama wanted'. Is this a sign of forgiveness for the woman she has just refused to call mother, or a bitter acknowledgment of the Kostelnicka's dominating forcefulness? In a discussion afterwards, Irina Brown told us how she'd come back to see the actors work out this scene three weeks into the run, and couldn't speak afterwards for the emotions it wrought in her. They had, she said, 'gone their own way'. And what a magnificent ensemble, almost as good as the Cloud Nine team (see below). Jodie McNee turns hauntingly from a serious but impulsive girl to a suffering young woman and on to a reflection of her stepmother; the two young men - Oscar Pearce as Laca and Ben Mansfield as Steva - both win our sympathy against the odds. Dionisotti is anything but histrionic, a charge levelled in one clearly misguided review: quiet, dignified, but with terrifying banked fires that erupt from time to time.

I only hope this thoughtful production of a masterly play has a chance to transfer. Even if it doesn't, I'm delighted to have caught it at the wonderful, friendly Arcola in Stoke Newington, just around the corner from what has to be one of the best Turkish restaurants in London, 19 Numara Bos Cirrik, with its delicious lahmacun and special onions soaked in turnip and pomegranate juice. We just had time to snatch a meal there before the show, and the waitress had been told by so many customers how she had to go and see the play. I hope she does. Sadly, it finishes on Saturday.
Posted by David at 12:28