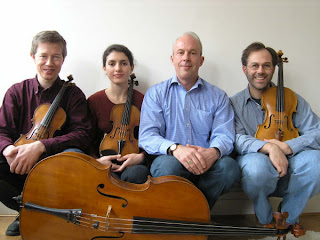 'Inside the BBC Symphony Orchestra', the somewhat anatomically titled (not by me) course I run at Morley College, has its more glamorous side in the shape of our friendly co-operation with players from the orchestra (usually two visits per term). Over the past three years we have built up an especially warm relationship with four 'strings' - violinists Patrick Wastnage and Rachel Samuel, viola-player Nikos Zarb and co-principal cellist Graham Bradshaw - who give concerts as the Helikon Quartet (inspired, I always assumed, by Nikos's Greek roots - his father is an accomplished guitarist, who once came too to play in one of the Boccherini Quintets. Now Rachel tells me she is also of the Hellenic strain - could I have guessed from her name?).

Having failed, owing to labyrinthine orchestral rehearsal procedures, to extract the Helikons to play in one of the pods of the London Eye earlier this year, I was delighted to be able to offer them a concert at the Garrick Club: an illustrated lecture next February in which I shall waffle on about Elgar's Indian summers in Brinkwells, Sussex and they will then play the glorious and complex Quartet. They were pleased to have the opportunity to get the work at least a little into their systems by trying it out at Morley on Thursday evening. So Elgar, the greatest, came to pay his respects to former Morley luminaries Tippett and Holst, whose signatures I have discovered in several scores in the college library, now safely lodged in the special collection.

It was a very happy, relaxed occasion. Both the students and I brought along a few guests, and around the performance there were lively demonstrations of romantic slides and portamenti, the particular uses of vibrato and the different string sounds required by visiting conductors to the BBCSO. The performance was, I think, their finest yet, in that Patrick especially had to soar, and did, in the difficult first violin part, and the passion of the outer movements was extraordinary at such close quarters (though I should add that I shan't forget their earlier Morley performances of the Ravel, Verdi and Shostakovich (First) quartets). We constantly pinch ourselves to realise that we are hearing first-rate music making in the slightly grubby, strip-lit classroom at Morley, surrounded by valiant practice noises (last year, in Room B15, it was trumpeters struggling to intone single notes; now we often get singers working at a level which might make even Florence Foster Jenkins blush).

Afterwards, as the players went off in search of a pint, I and my friends Simon and Patricia dived into the nearest Italian restaurant, the Cotto opposite Lambeth North tube, and found to our surprise that the pasta was fresh, fatta in casa, and the whole ambience very friendly, a l'italiana: an extra pleasure to rival Bos Cirrik after the performance of the play Jenufa the previous week.
Posted by David at 10:37